With only one city left to discover in the South of Holland, I prepared myself for one of the longer train rides and got ready to visit Maastricht. Maastricht is approximately 2 and a half hours by train or car from Rotterdam.

Maastricht is the capital city of the province of Limburg, and is known for being a cultural city with many heritage sites. It is a city further known for its international student population as well as its recreational options.

I arrived in Maastricht with a friend of mine from my master program and we began to walk towards the city centre. Right in front of the train station is a street with so many restaurants ranging from gourmet burger to bakery’s to more upscale establishments. There are also an array of branded shops like Hermes, what a nice street to arrive on!

Walking towards the city centre from the train station in Maastricht

There were even flower stands on this cobbled street 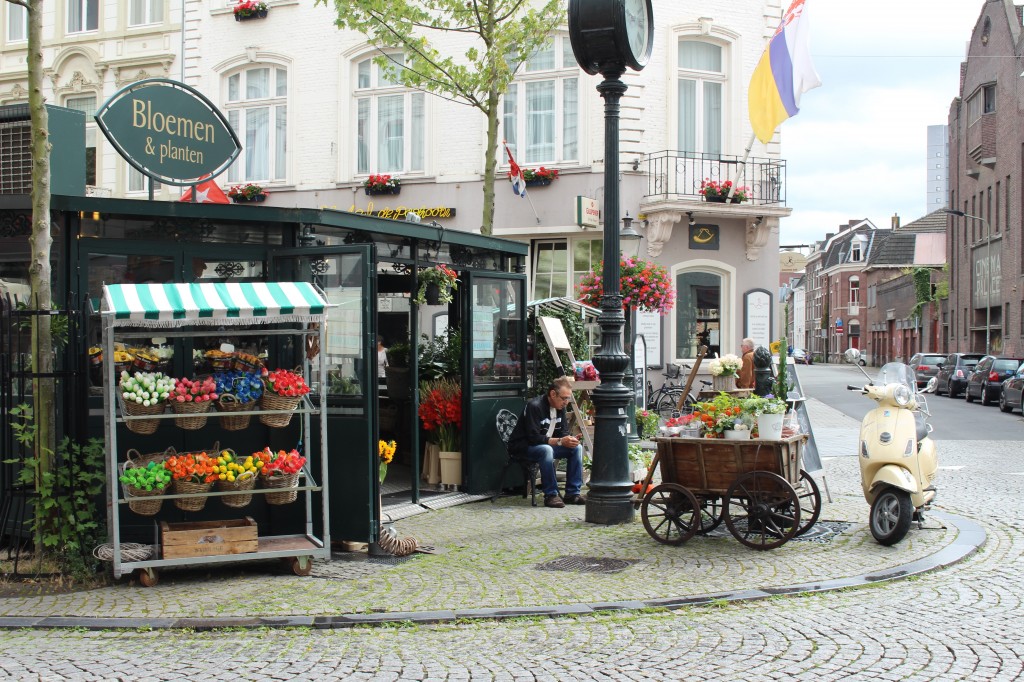 Not only is this street full of places to discover but so are the streets parallel. 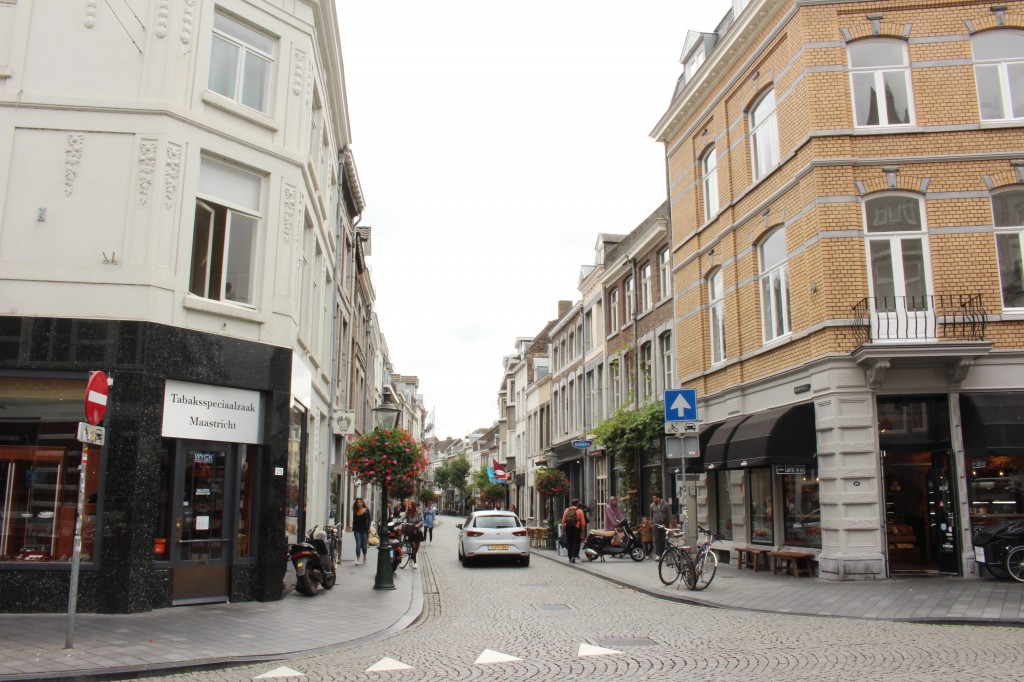 Streets of Maastricht filled with restaurants and shops

Once you cross the Sint Servaasbrug or bridge into the center things start to look a bit different. 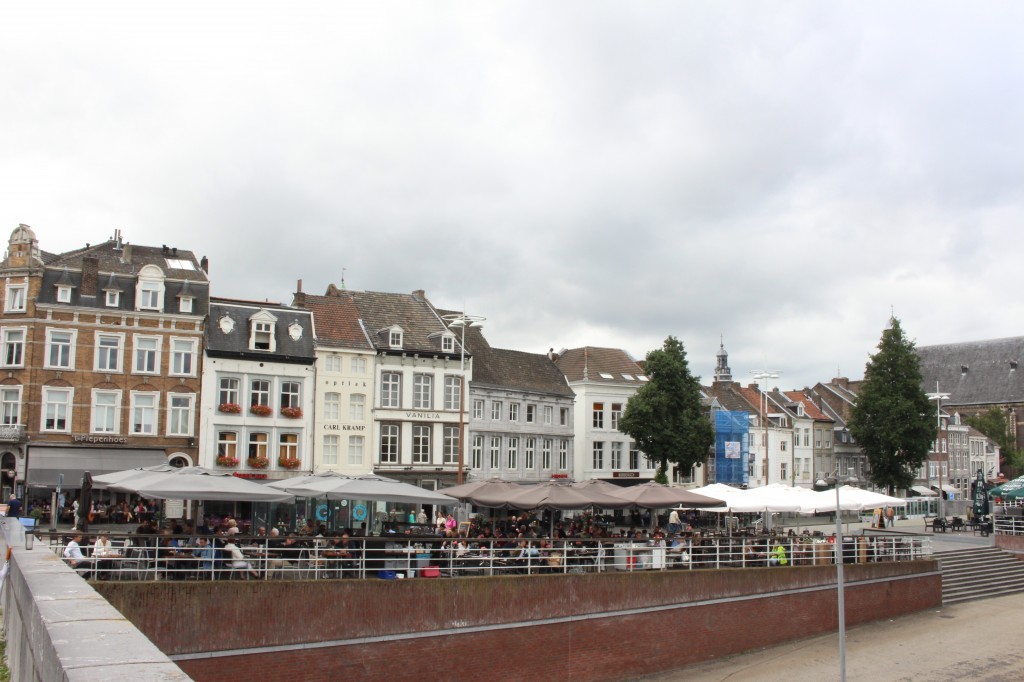 Since we arrived around lunch time (as per usual) we sat down at one of the first café’s after crossing the bridge. It was called the Buvette t’ piepenhoes and their home-made ice tea was so refreshing! 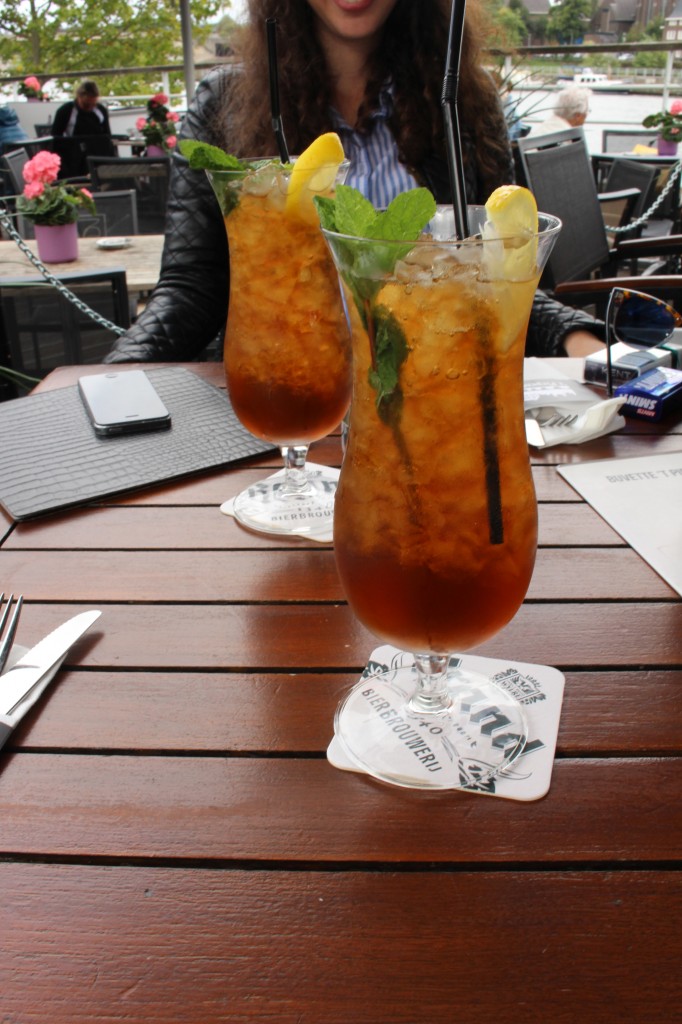 We ordered delicious shrimp “Krokets” and a carpaccio with truffle mayonnaise. A great lunch before starting our tour of the city. 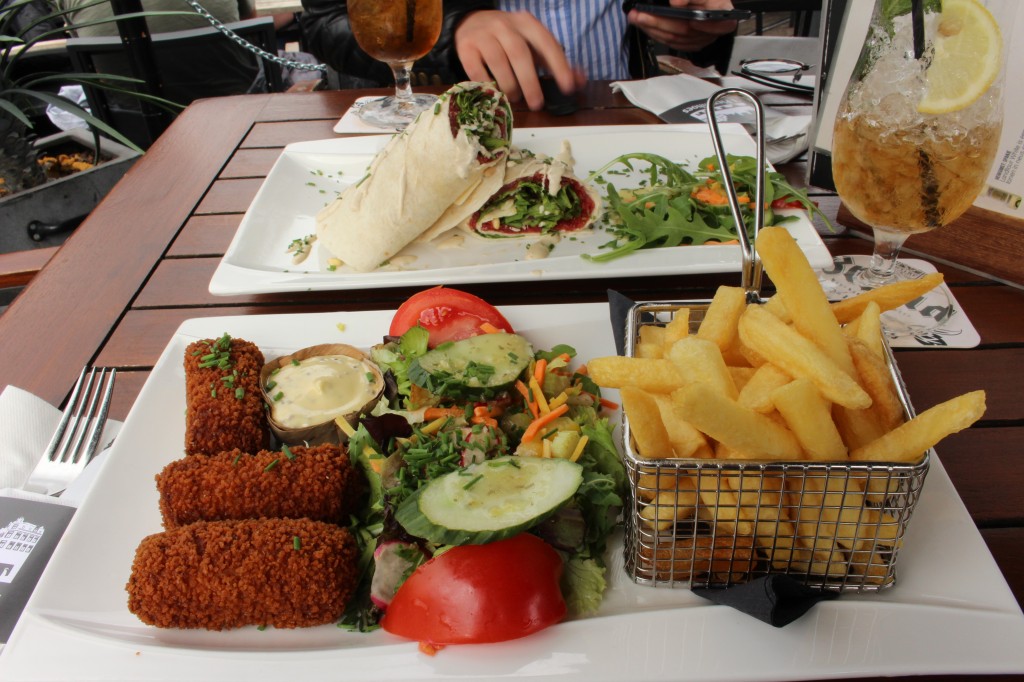 Lunch in Maastricht, The Netherlands

After lunch we took a minute to admire the bridge we crossed (Sint Servaasbrug) over which is one of the many highlights in this city. This footbridge made of arched stone crosses the Meuse River and was named after the first bishop in the city. It is said to be the oldest bridge in the country (Although it was partly rebuilt after World War II). 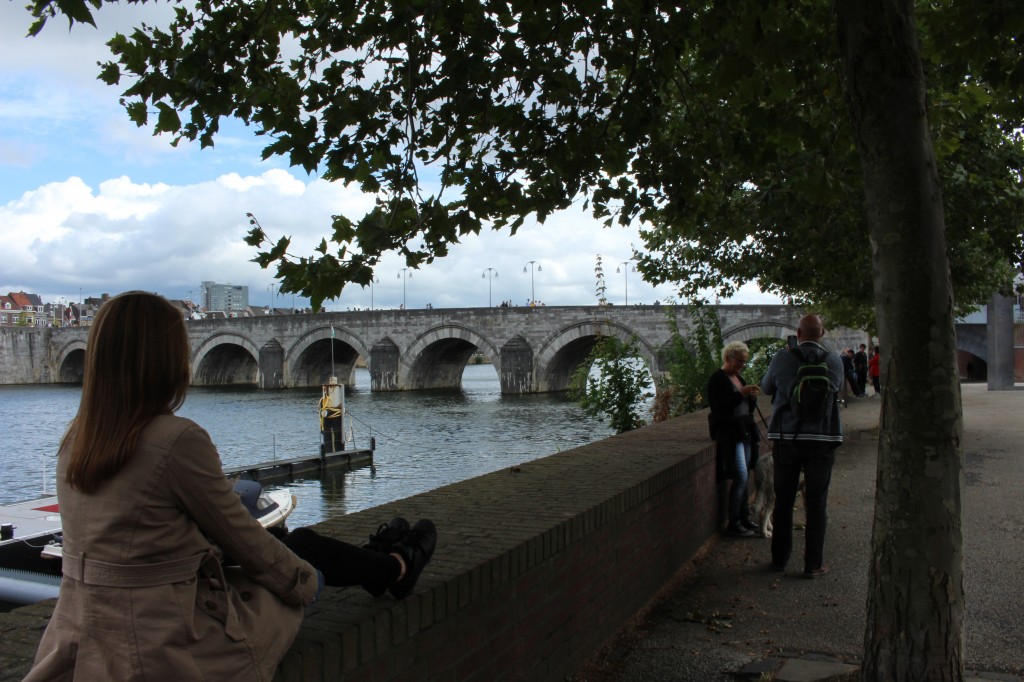 Sint Servaasbrug in Maastricht, The Netherlands

After looking at the bridge and with the sun coming out we walked onto the main street. 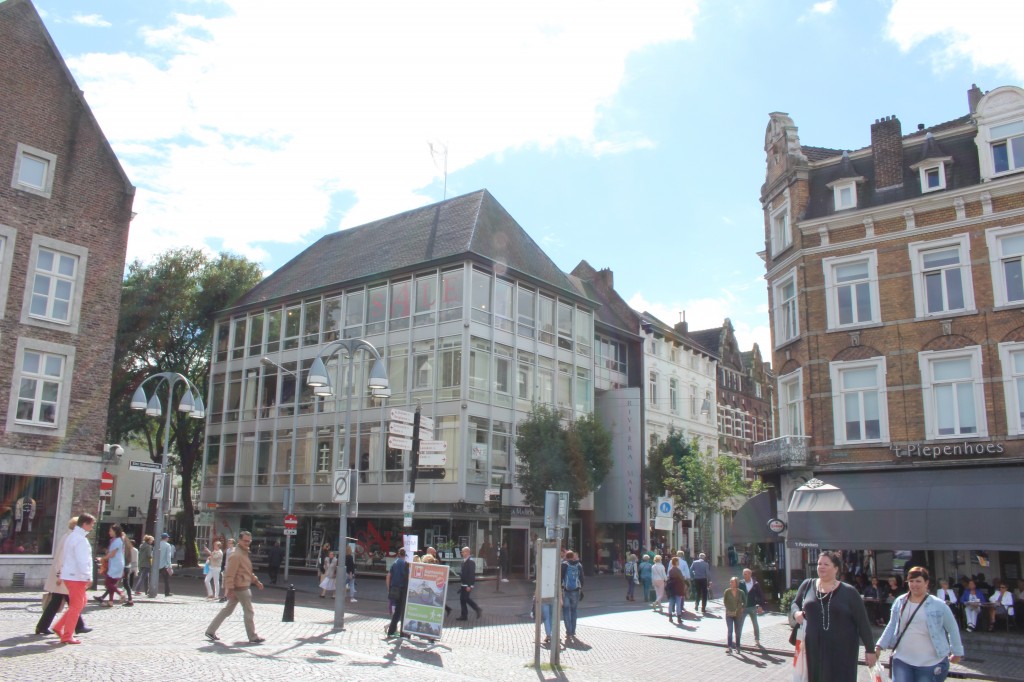 Entering the city of Maastricht, The Netherlands

We walked along the Maastrichter Brugstraat which is the main shopping street. At the distance you can already see the Bijenkorf (the department store of the Netherlans). 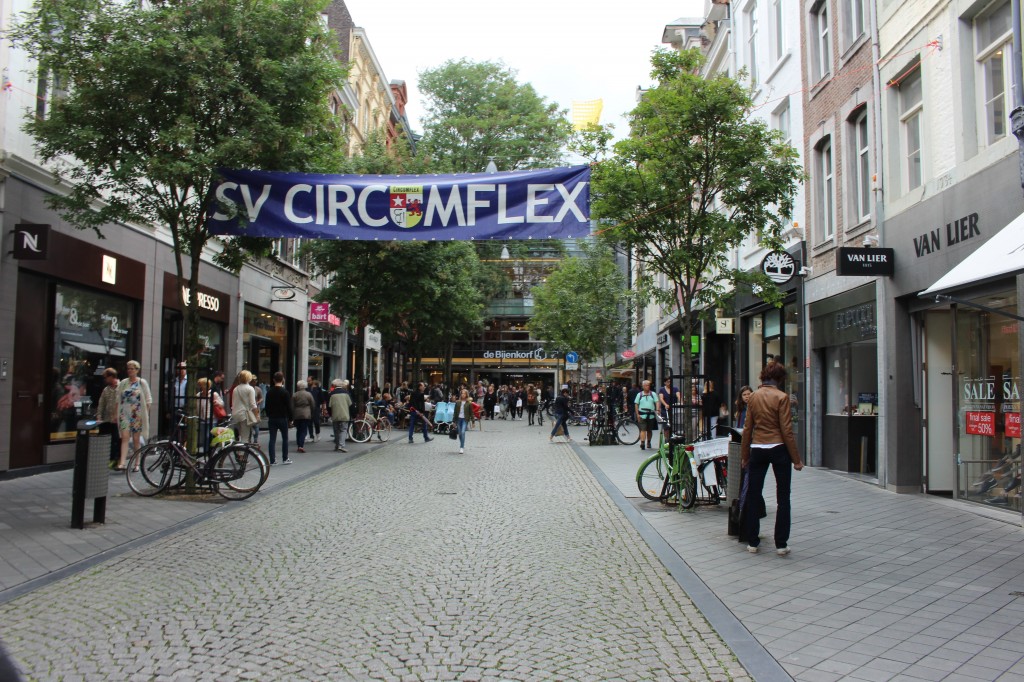 After walking along the many stores which can be found in most cities we reached the Market square. It was not a market day however there are still restaurants bordering on the sides. 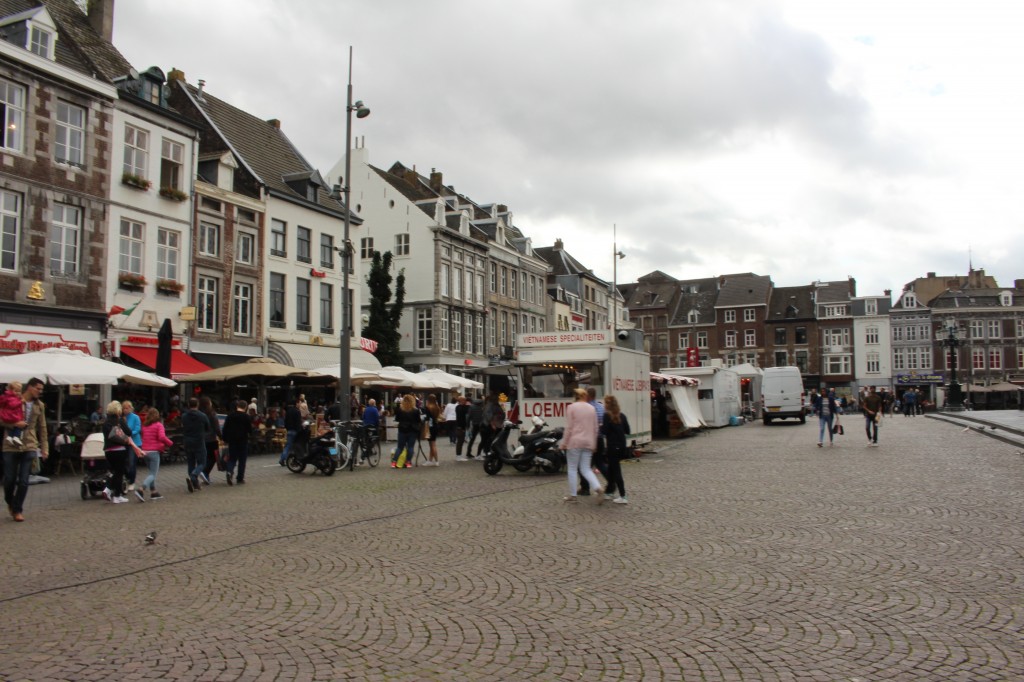 On one side of the market square was the city hall. The city hall was built in the 1600’s and has a height of 47 metres. 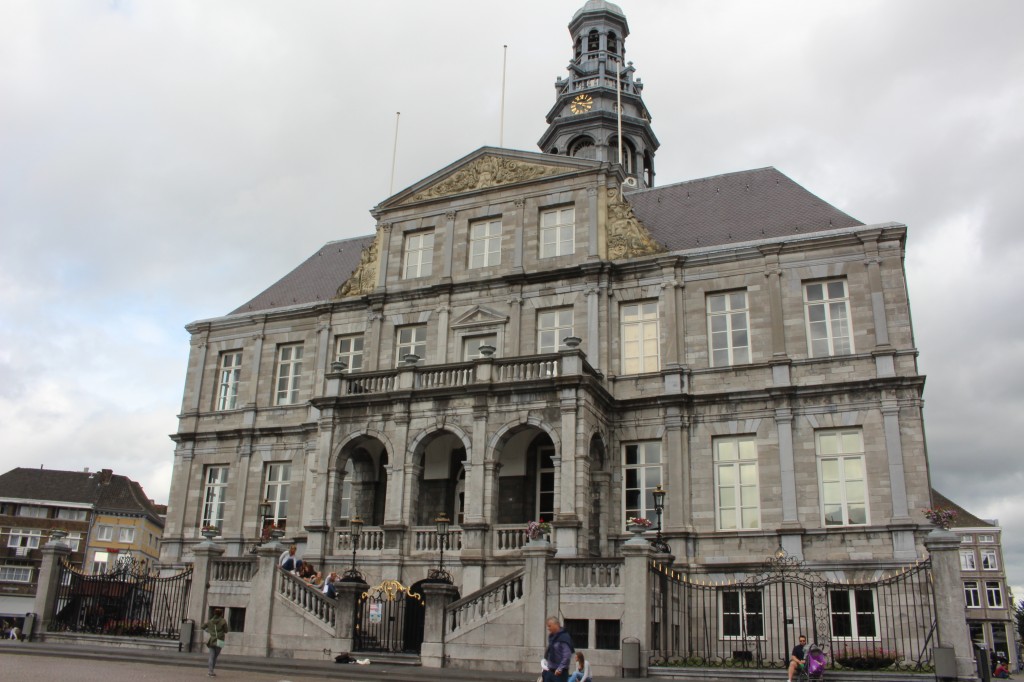 City Hall or “Stadhuis” of Maastricht in the market square

From the market square we continued to walk until we saw a beautiful and historic looking building.  We didn’t know what we would find on the inside but thought we would go for it anyways. 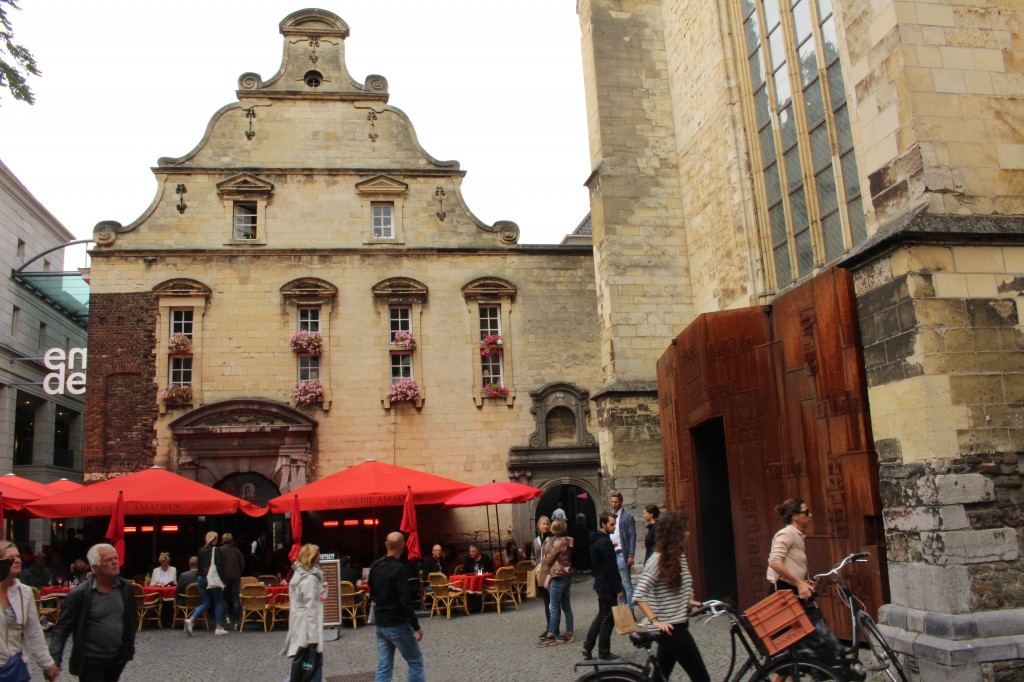 Beautiful buildings in Maastricht, The Netherlands

We were very surprised to find the Dutch bookstore Selexyz!! It used to be a dominican church which was built in 1294. I love books and seeing this was simply breathtaking! 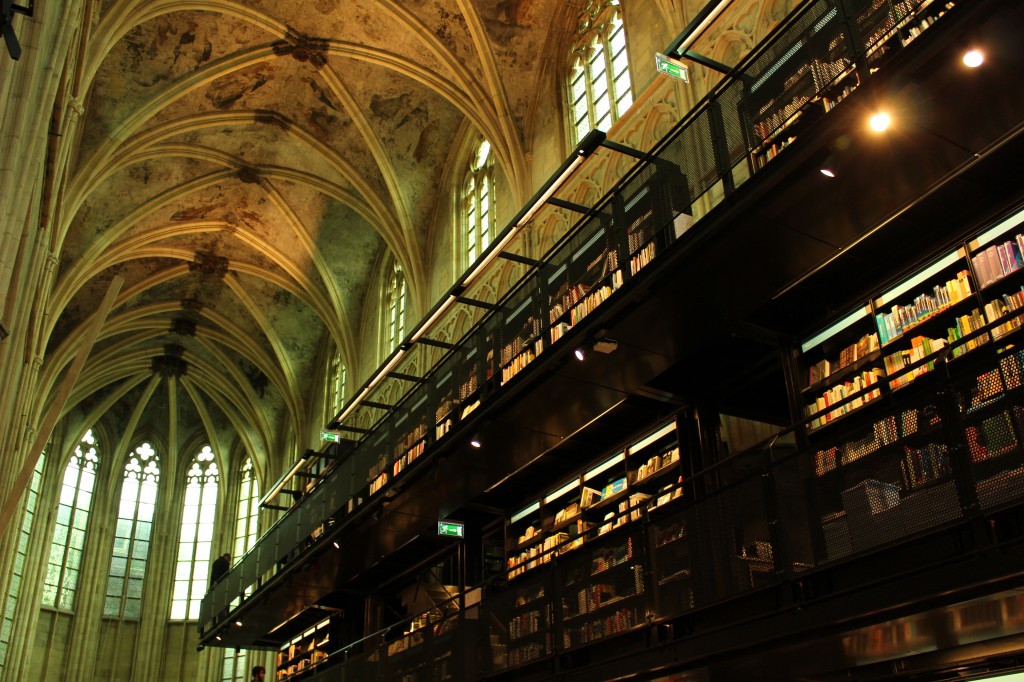 There were three floors of books and the contrast between the books and the lighting and the high ceiling were simply spectacular!

From there we continued walking and came across the famous Vrijthof. The area was fenced around so we could only see the top (hence the picture below). This is the most famous square in Maastricht and is surrounded by bars and restaurants (and a really nice ice cream and waffle place). 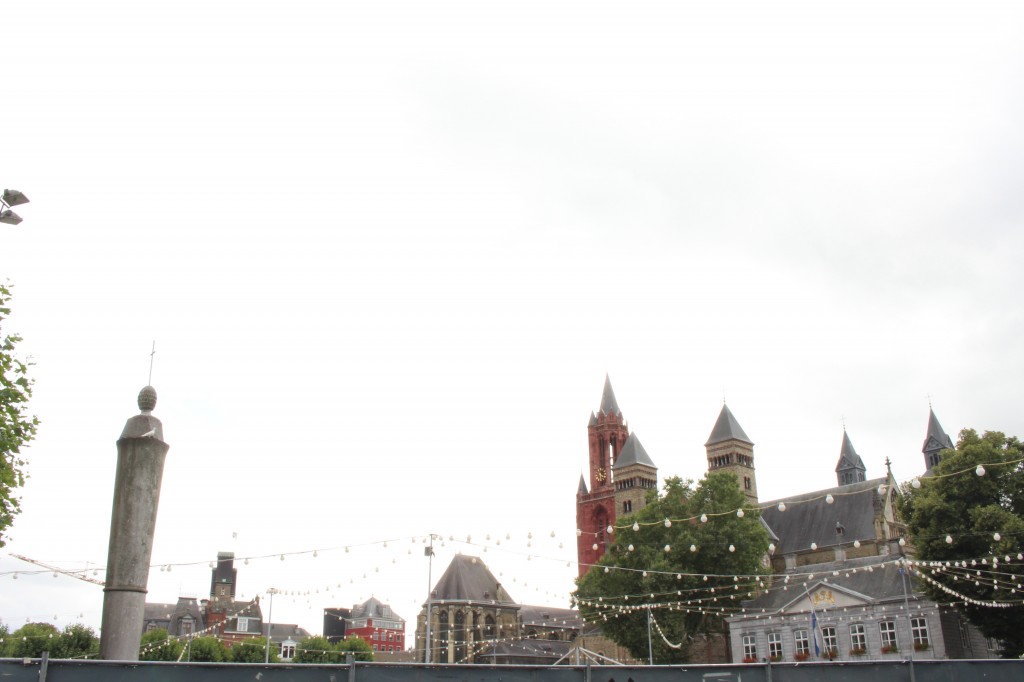 Vrijthof with its fairy lights in Maastricht, The Netherlands

A mere few steps from the VRijthof you have the Basicilica of Saint Servatius and the Sint Jansen Kerk. 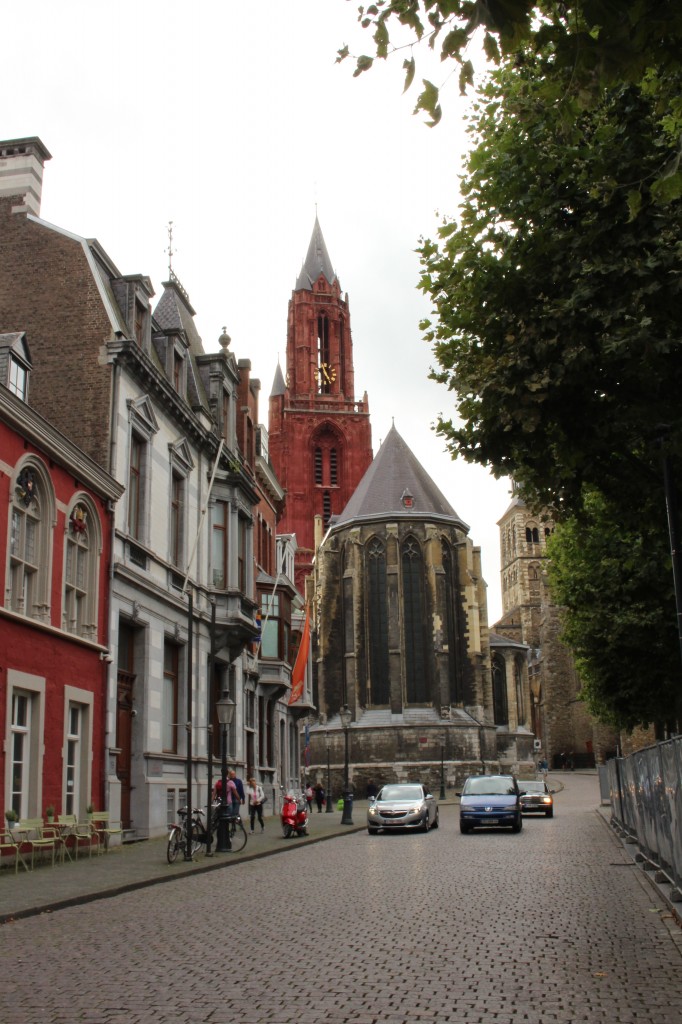 The Basicilica is a Romanesque medieval church with many sculptures, the entrance is on its right side and it is open for visitors. The Sint Jans Kerk is a gothic protestant church that was dedicated to Saint John the Baptist. Its red limestone tower is unlike any other tower I have ever seen! It is really amazing. 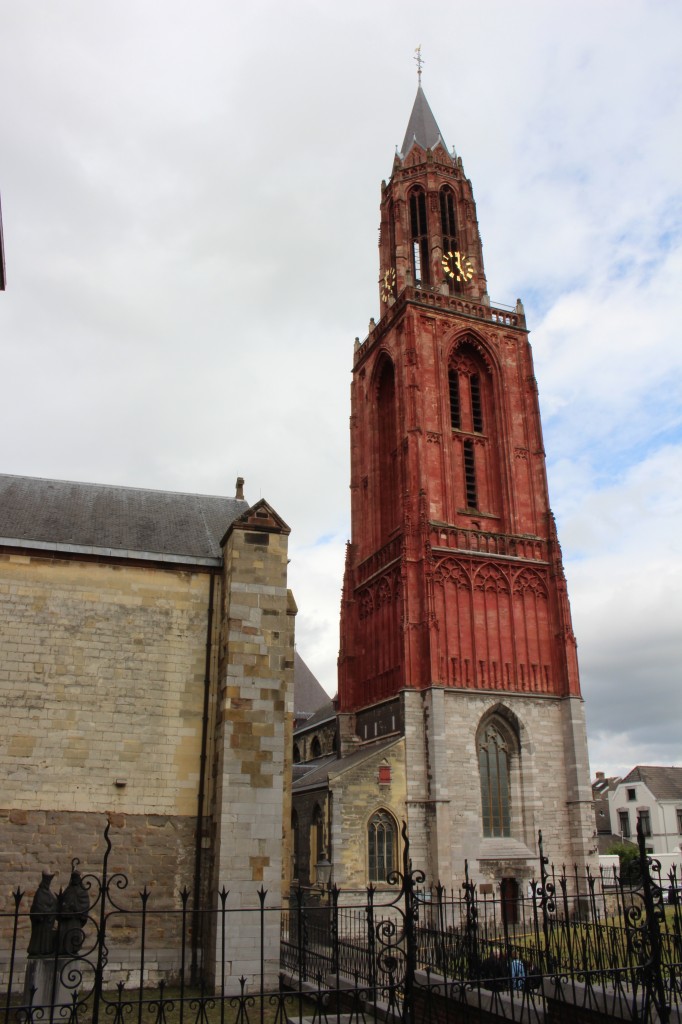 The Sint Jansen Kerk in Maastricht, The Netherlands

Walking a on we reached a beautiful square called the Onze Lieve Vrouweplein, a square surrounded by trees with terraces in its centre and a church on its side. The church was very dark inside and as soon as you enter you see a shrine for the Our Lady, star of the sea. There were texts displayed in many different languages and so many candles. 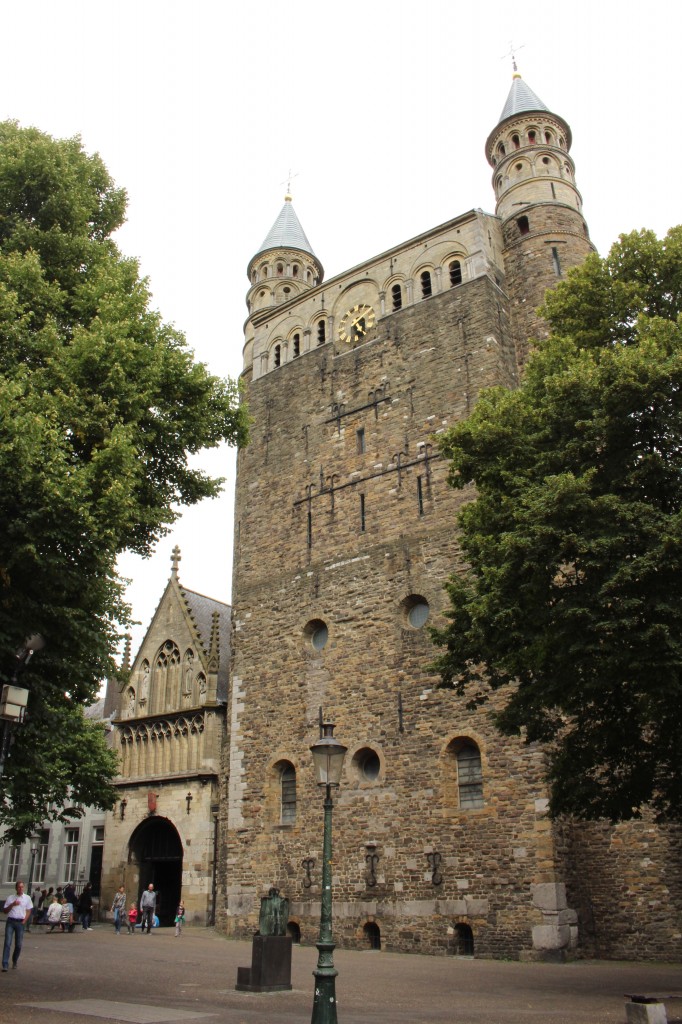 Basicilica of our Lady in Maastricht

From the Basilica we walked towards a park called the Stadspark, quite a big park. On the way to the park we passed the medieval city wall and passed fountains and many people walking around. 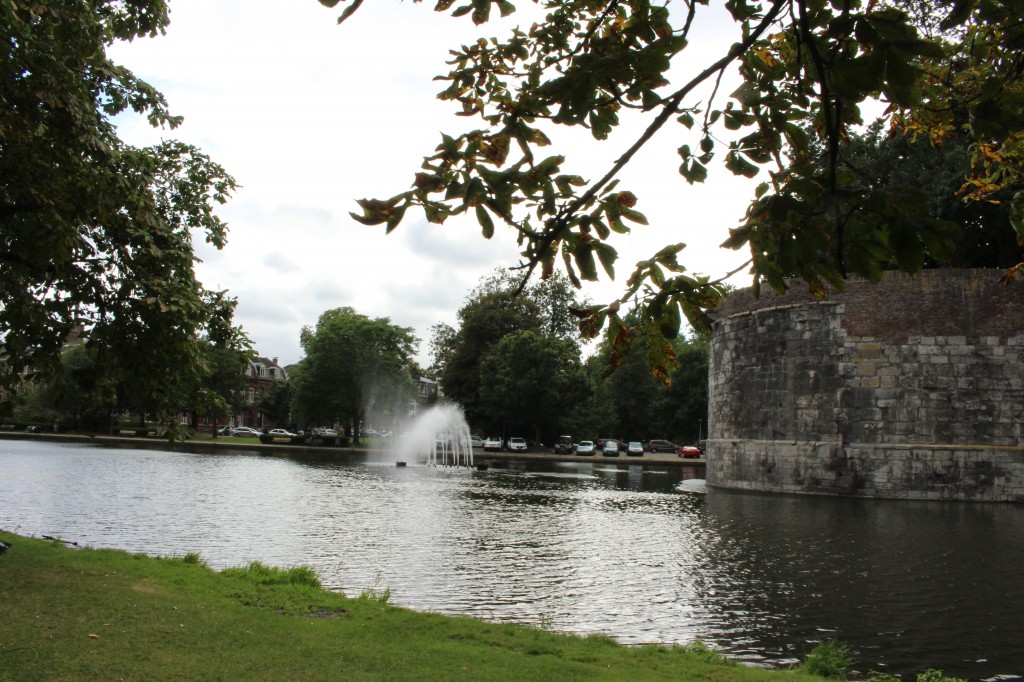 Stadspark in Maastricht, the Netherlands

We kept walking and came across.. the statue of D’Artagnan!! Everyone knows the three musketeers; it is a classic. Just a quick recap; he served Louis XIV and was captain of the Musketeers (all for one, one for all), there are several movie interpretations, ring a bell? 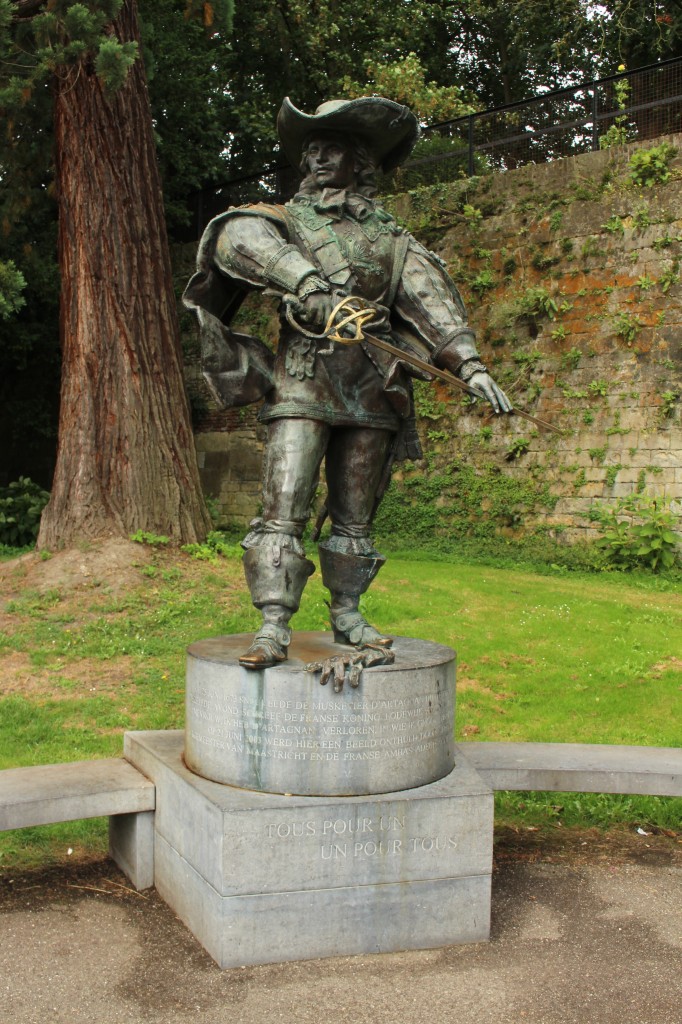 Statue of D’Artagnan in the Stadspark in Maastricht

Well it turns out he died at the Siege of Maastricht during the war and a statue was created to honour him by the French embassy.

It was a great day in Maastricht and there is so much more to see but there was not enough time! Make sure to visit.