What is summer without a trip to the Greek Islands? This summer I went to the Island of Rhodes which is located near Turkey and north east of Crete. Rhodes is one of the biggest Greek Islands and similar to Crete when it comes to its Geography. These islands are great to go and stay in Beach resorts but still have the possibility to see some history and sightseeing.  I was staying at a beach resort in Ixia, approximately a 10-minute drive from the old town of Rhodes and on the windy side of the island. I must say that although not many Greeks seemed to like the sea breeze, I love it!

The city of Rhodes is divided into two areas, the new and the old. I decided to start my day at the port in the old part of town in order to see one of the main attractions of Rhodes. The island is famous for being the location of the Colossus of Rhodes, one of the seven ancient wonders of the world.

Where the Colossus of Rhodes once stood, Rhodes.

Now what you can see are two pillars on each side of the water (picture above) which is where his feet should have been, one on each side. The colossus (A Greek Titan god) was built to celebrate the victory over Cyprus.

Other than that at the port in the distance you can see windmills and many cruise ships. 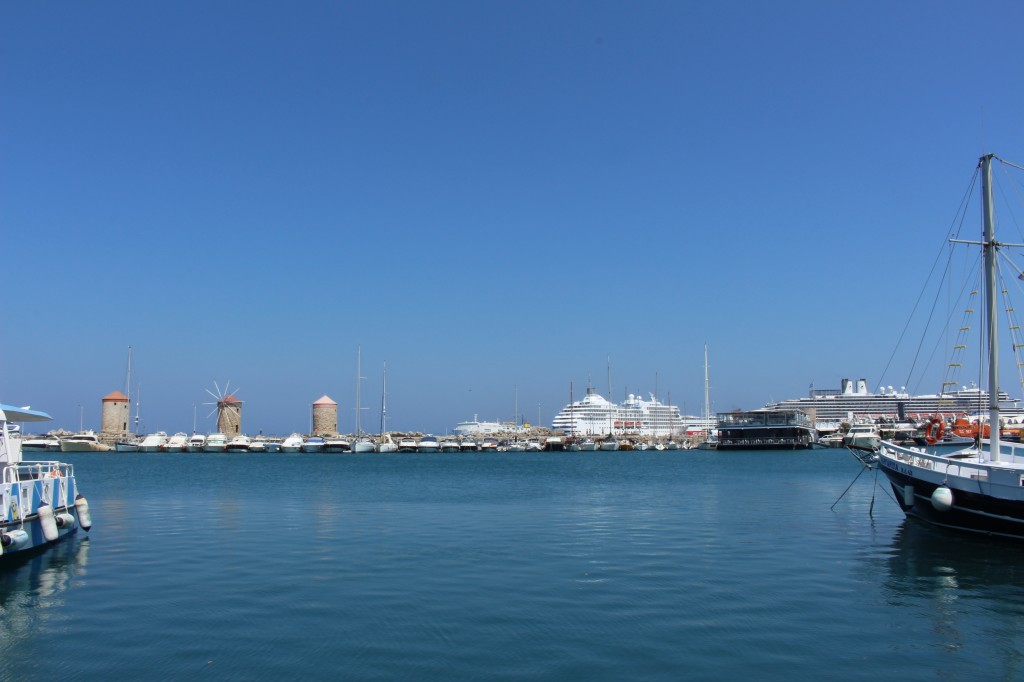 Windmills and cruise ships at the Mandraki harbour in Rhodes.

There are also many historic buildings and it is simply inspiring to walk along the port. A quick tip is that you should either visit the town in the morning around 10 or in the afternoon around 4:30 because otherwise it is extremely warm! 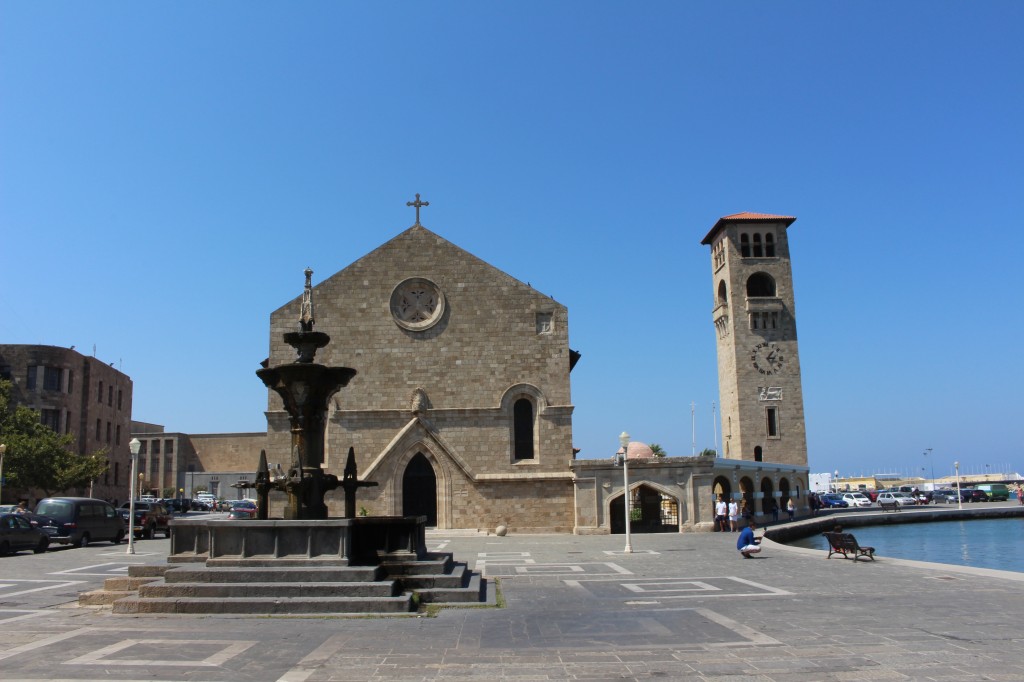 If you are looking to find information about tours on the island, tours on boats or tours to other islands you will see many stands along the waterside offering all kinds of tours. 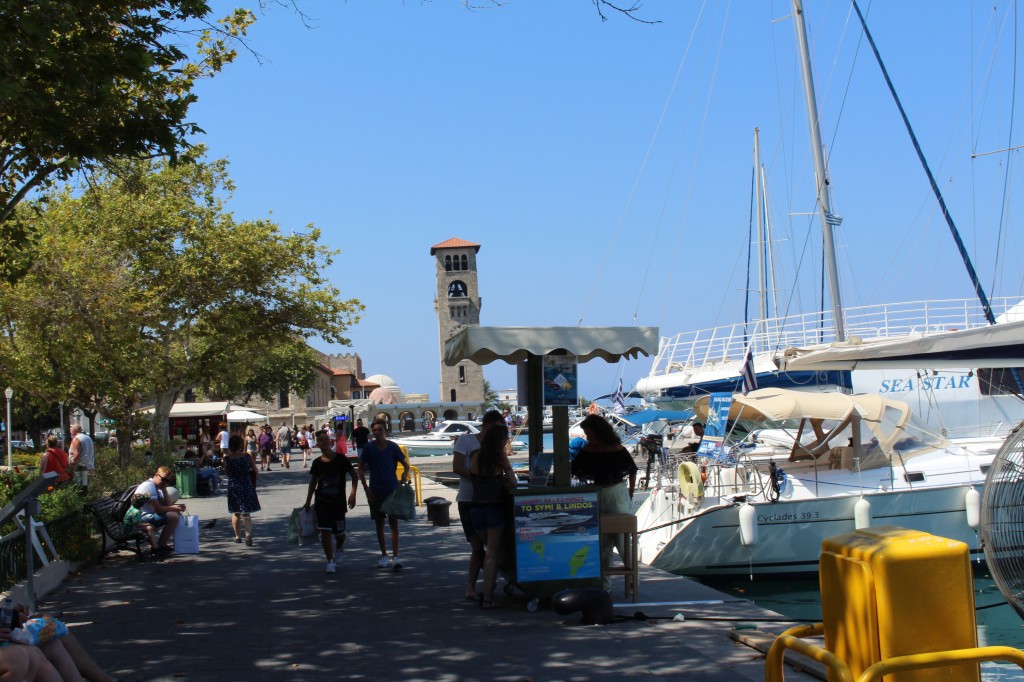 From the port I walked towards the entrance to the Medieval city, which is simply amazing! When you look at the medieval city from afar it looks like a castle surrounded by tall walls but there is a palace which is part of it but mostly a city within those walls. 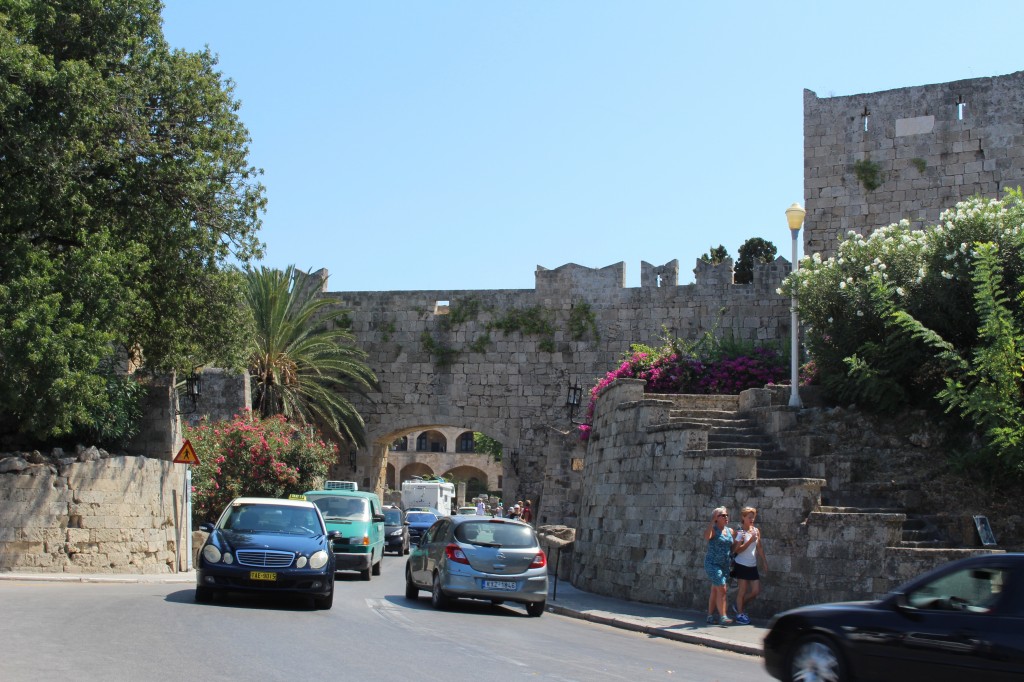 Entrance to the Medieval city in Rhodes.

Throughout the city you see people selling crafts and arts. 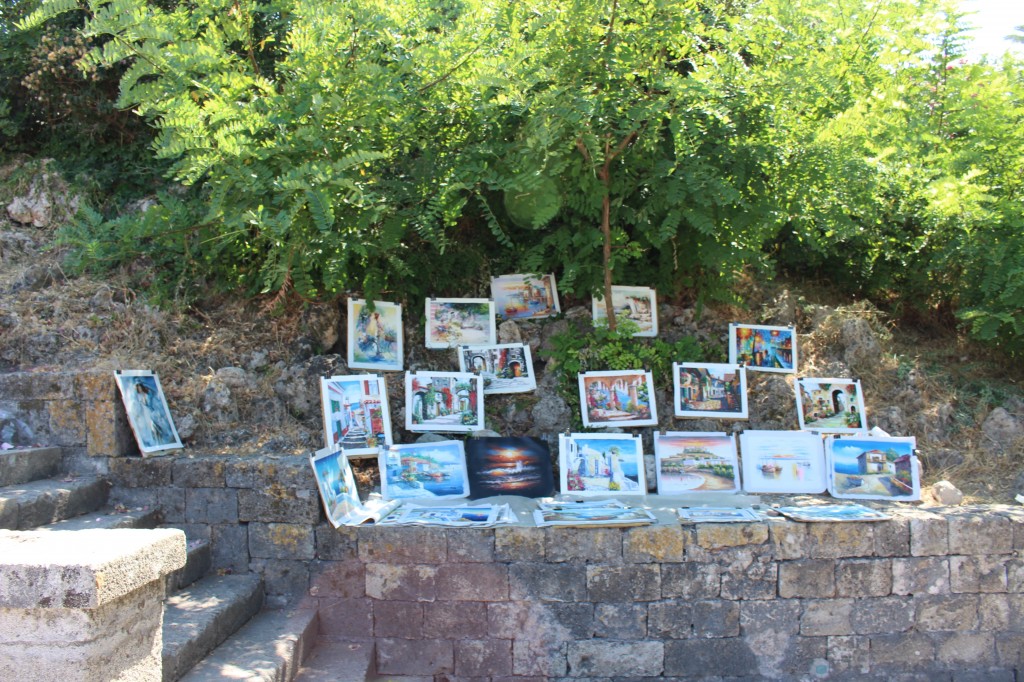 Art being sold at the Medieval City in Rhodes.

And of course spices and condiments! 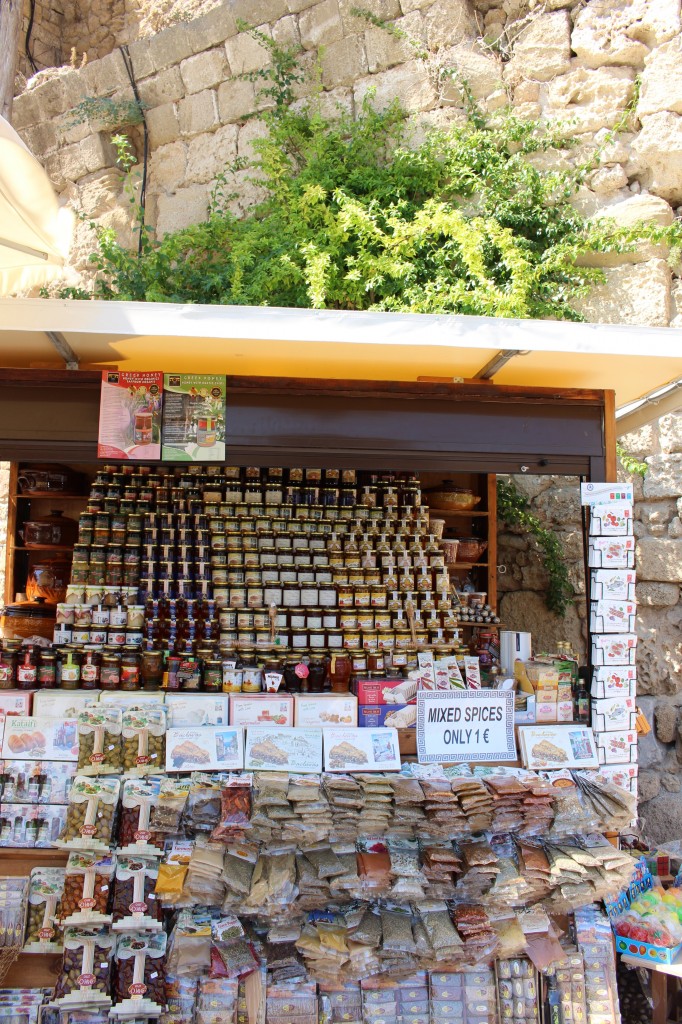 Greek condiments being sold in Rhodes

When crossing the entrance, you come across a square where you can also find a taxi stand. 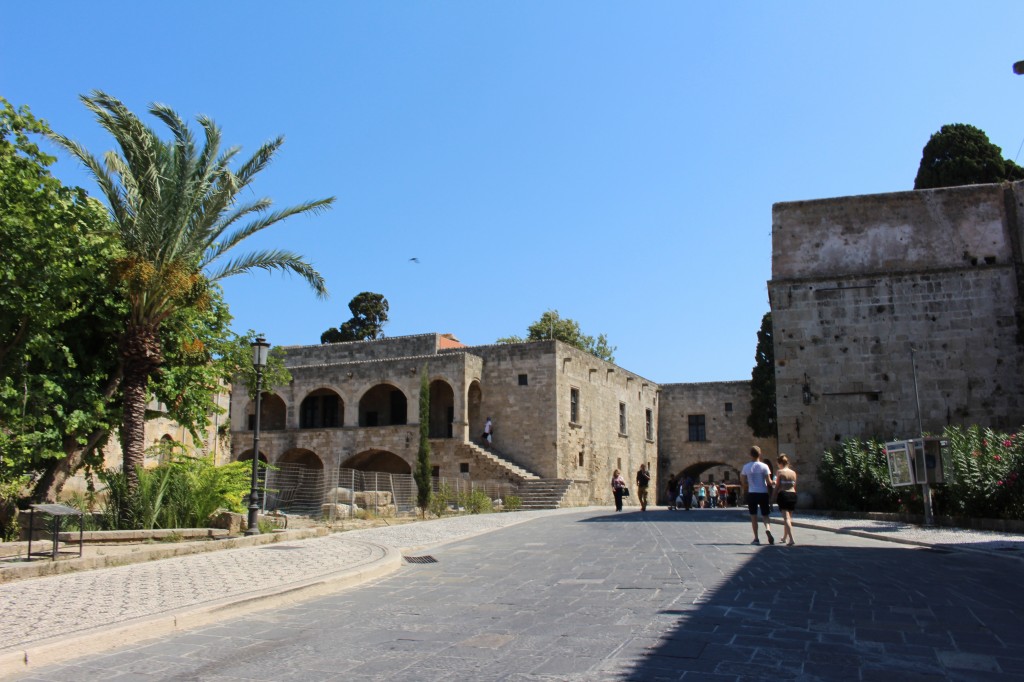 Walking through the Medieval City in Rhodes 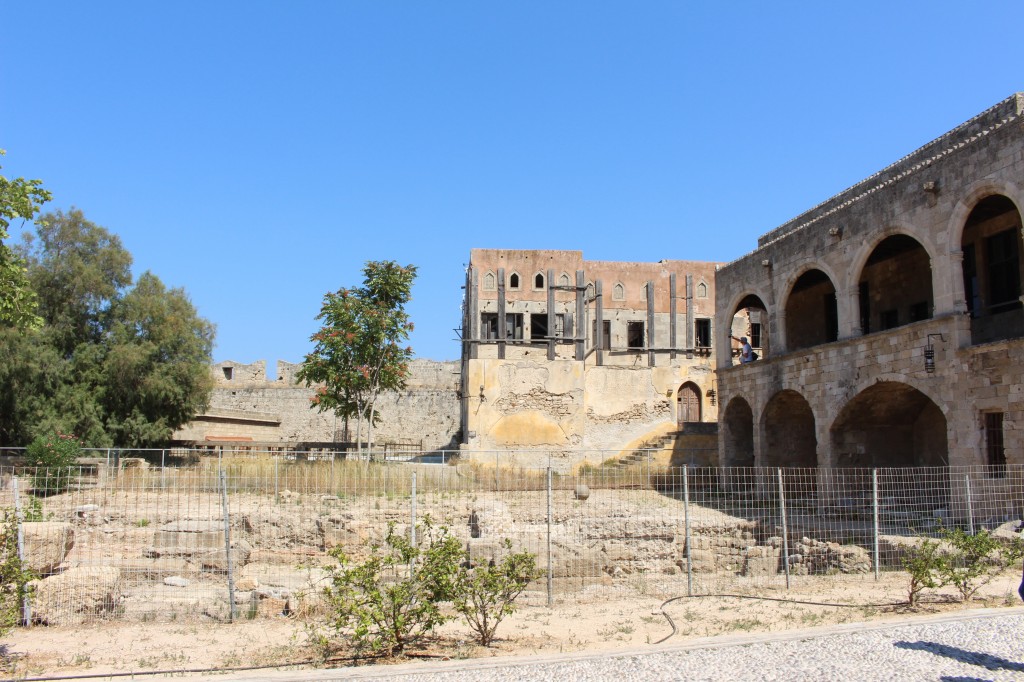 And many beautiful structures as you continue to follow the path into the heart of the city. 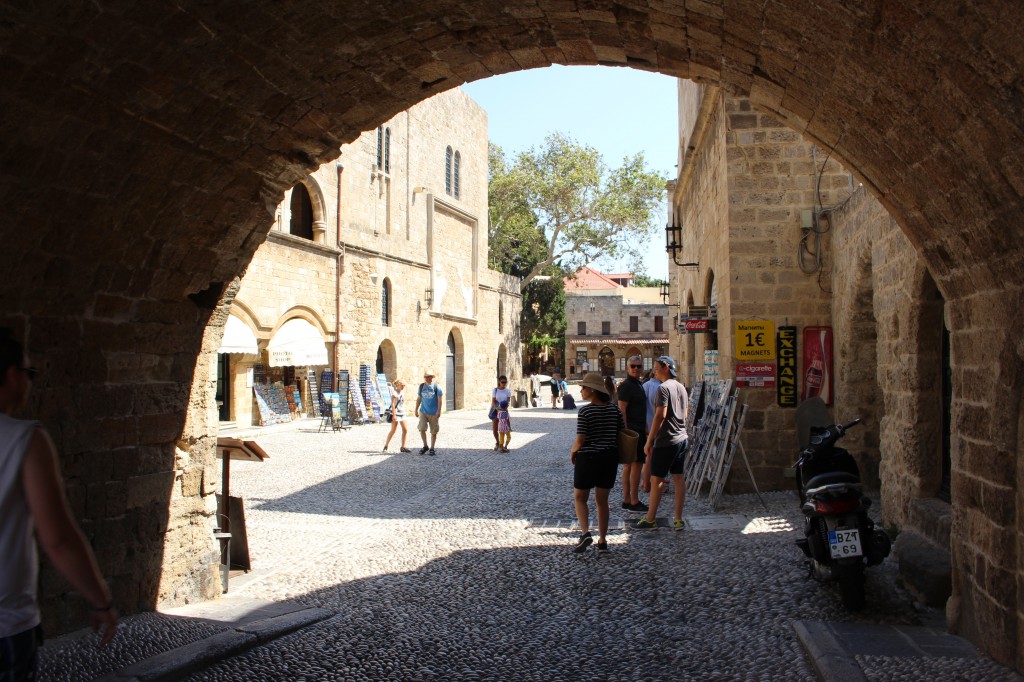 Walking towards the centre of the medieval city in Rhodes

One of my favourite streets and one of the most important streets in the city is the Knights Street. This street leads to the Grandasters Palace. 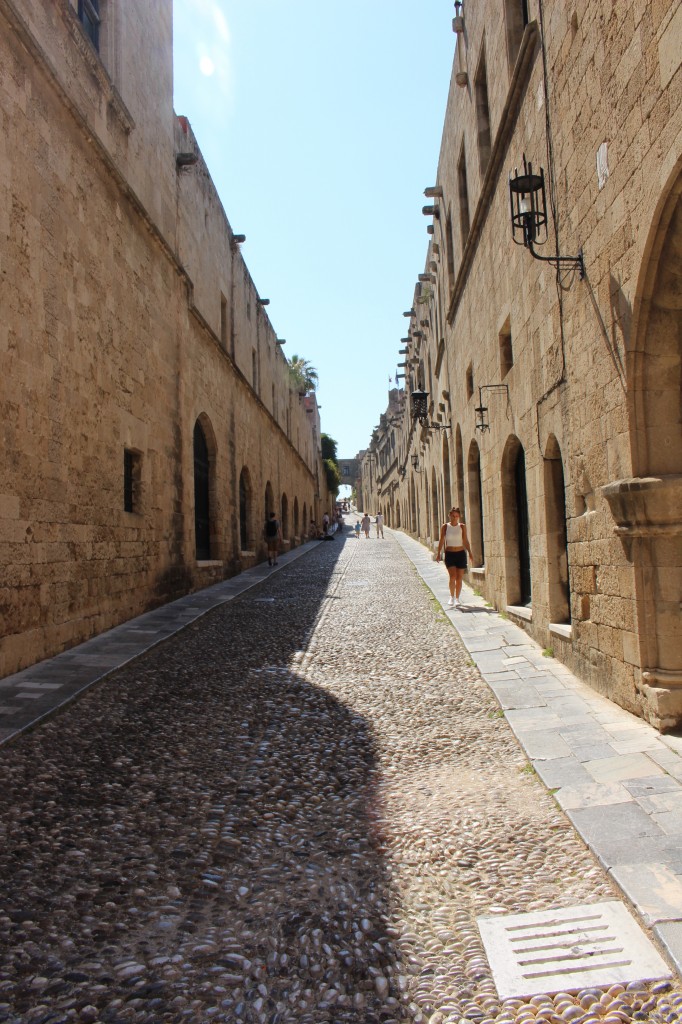 Knights street in the Medival City of Rhodes, Greece

When walking down the street look at the facades on the side which is there the knights would be lodged according to where they came from. It is a great place for a picture!

Another one of my favourite parts of the city was Symis square. This is a beautiful and elegant square in the medieval city which has a portal with beautiful flowers and a must for taking memorable pictures!

Symis square in the Medieval City of Rhodes

If you continue to follow the road you eventually reach busier shopping streets that sell all kinds of things from food to leather to clothing. Beware that many places sell the same things and make sure not to pay the more expensive price so have a look around first! 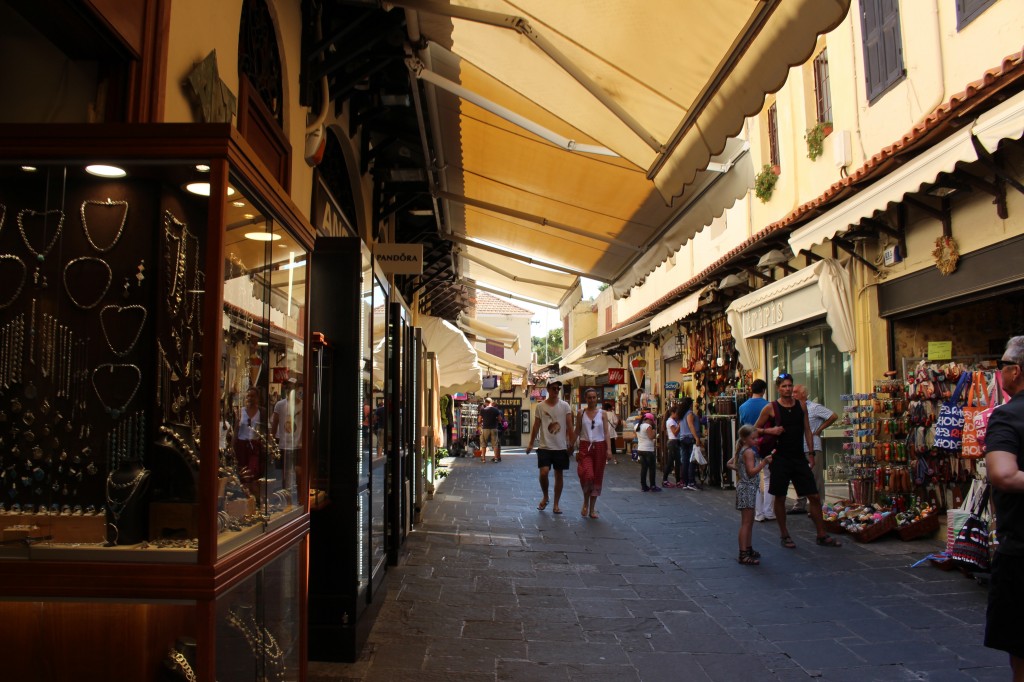 Shopping street in the medieval city of Rhodes.

There are many squares with restaurants and more shops within these streets. 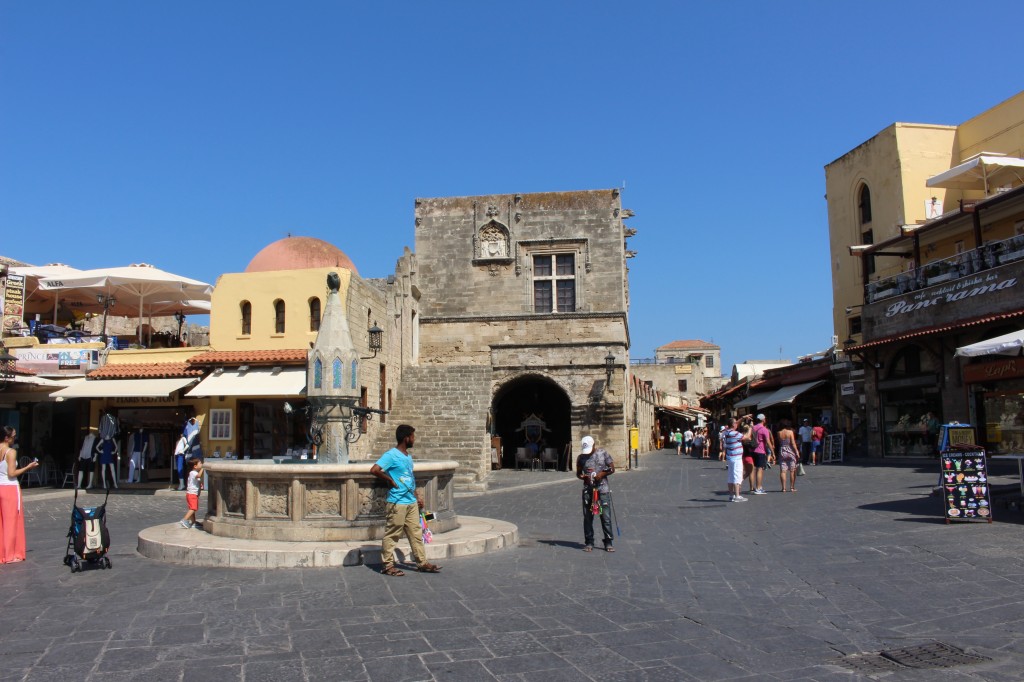 A square in the Medieval city of Rhodes.

It is simply amazing how the ancient buildings and all that history is so surrounded by daily life. 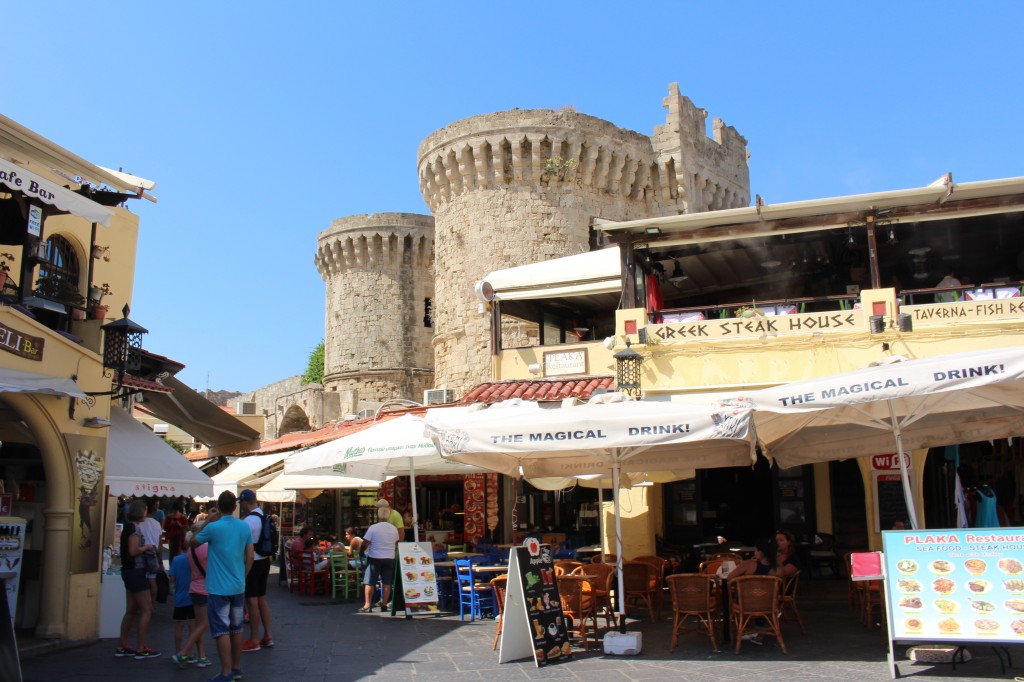 A busy shopping street with a historic background in Rhodes.

And so many of the buildings are beautifully decorated with flowers. 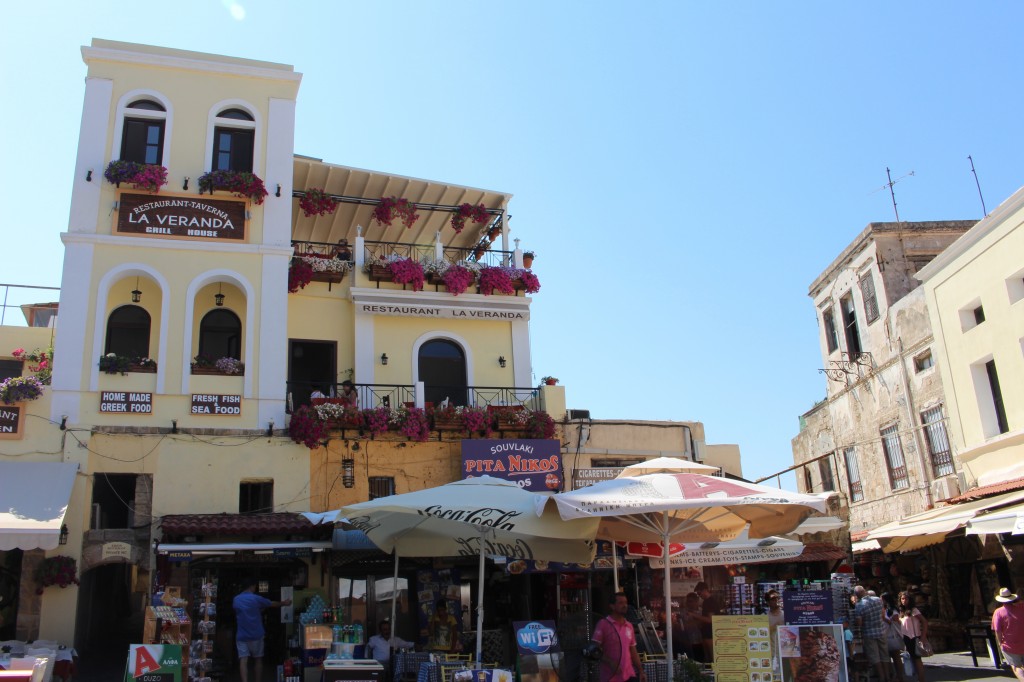 Flowers decorating the old buildings in the Medieval City of Rhodes.

Walking around you come across so many picturesque narrow streets. 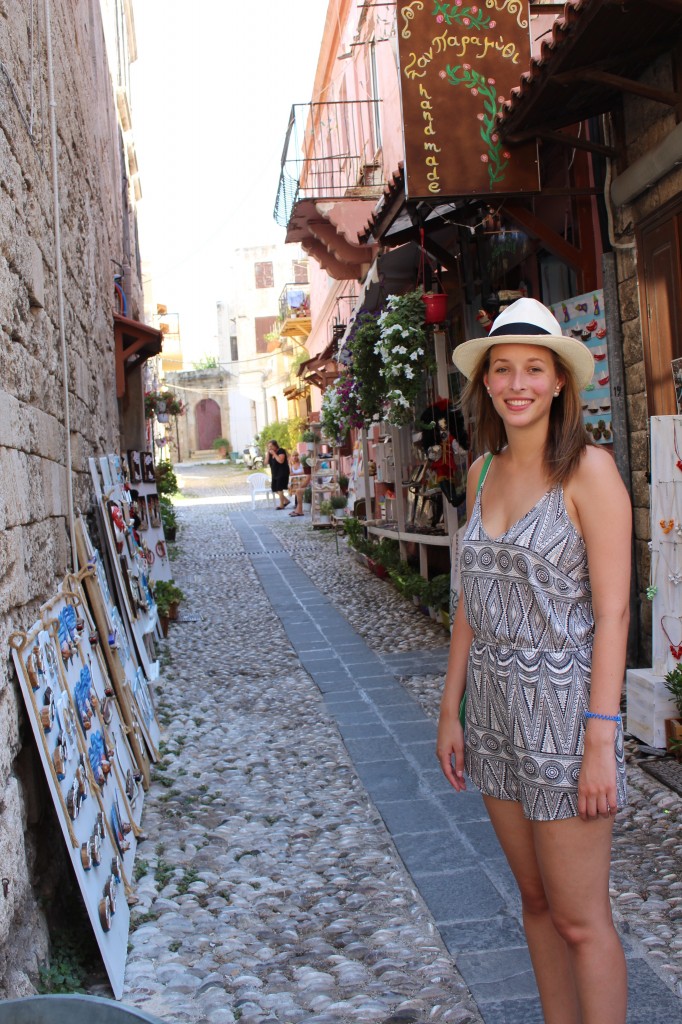 My touristic picture in the Medieval City of Rhodes.

Walking around the Medieval city can take a while depending on how distracted you are with the shops! 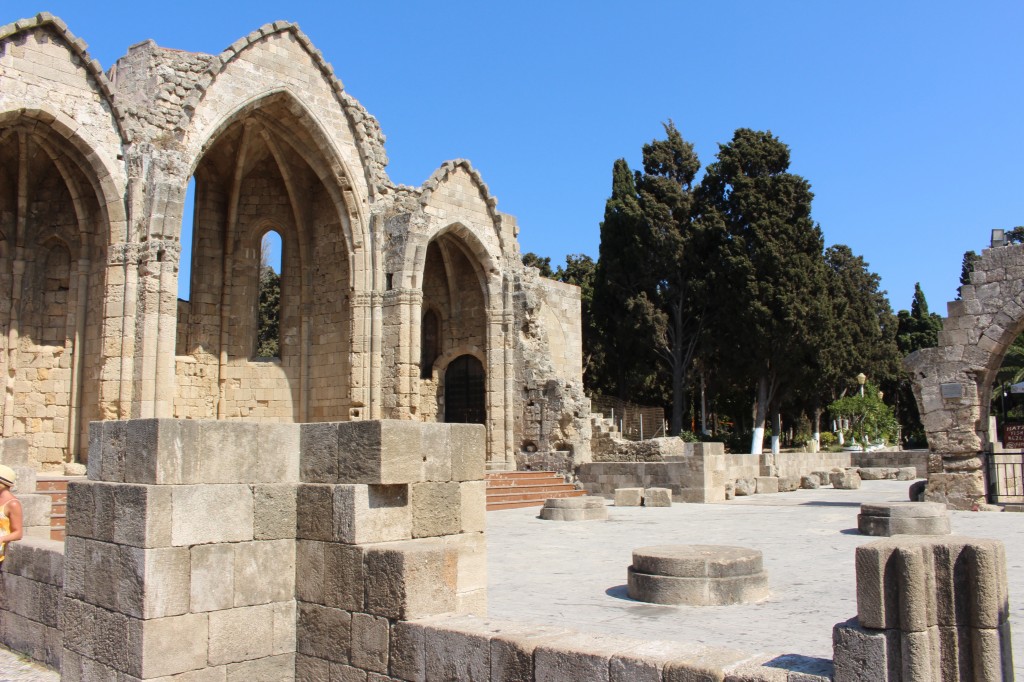 Ruins at the Medieval city of Rhodes.

The new part of Rhodes which I previously mentioned is where all the more known shop brands can be founds and more franchised café’s etc. I walked around it for a while but the medieval city is definitely the place to spend the most time on! The city can be reached either by taxi, approximately 11 euros from Ixia or by bus which can take you to cities further away such as faliraki!

Only a few minutes by car from the Old city of Rhodes you see the Acropolis of Rhodes. I wouldn’t recommend walking there, take a taxi!

The first thing you see when you arrive at the Acropolis is the temple of Apollo which is now being refurbished. 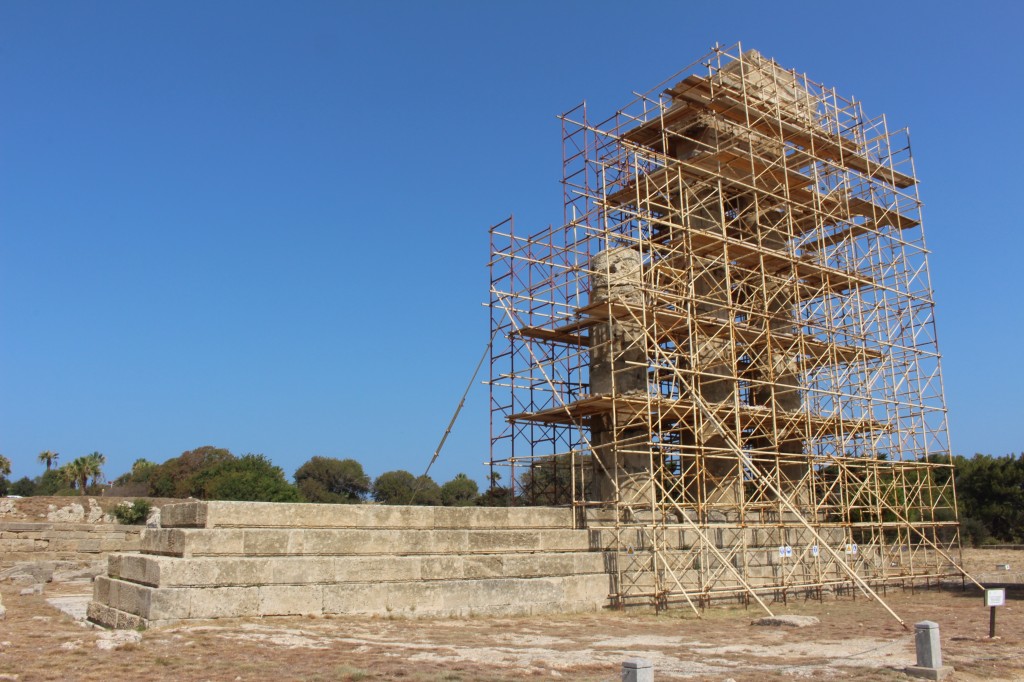 Temple of Apollo in the Acropolis of Rhodes

But do not stop there… walk towards the view of the city of Rhodes and when you look down you will be amazed to find an ancient theatre. 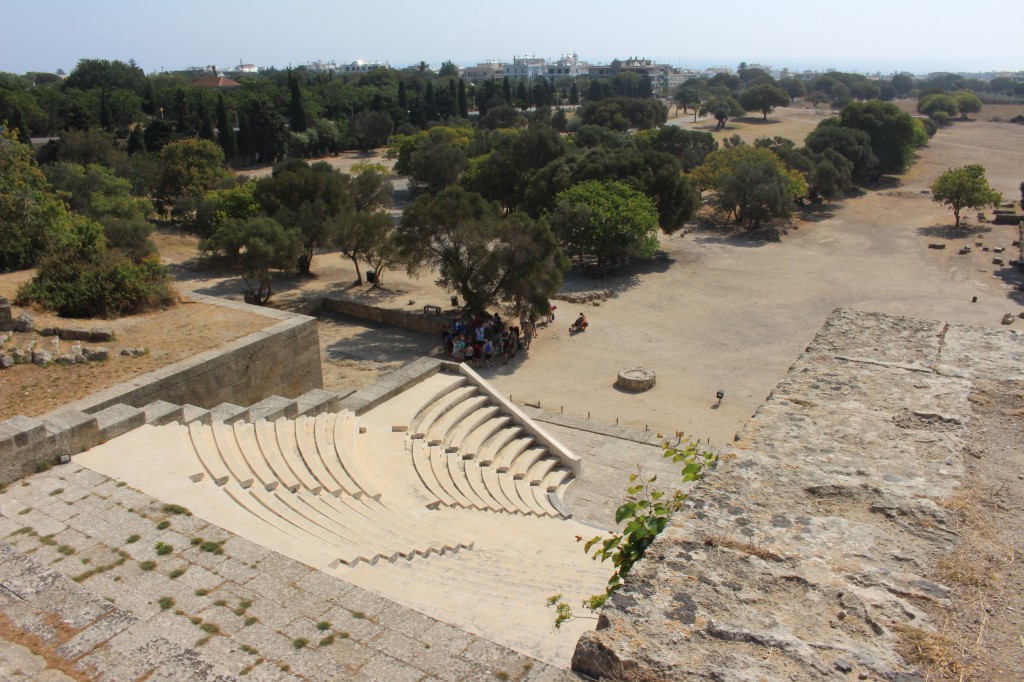 Ancient Theatre in the Acropolis of Rhodes

Follow the steps down to the theatre and on your right you will come across the ancient stadium. 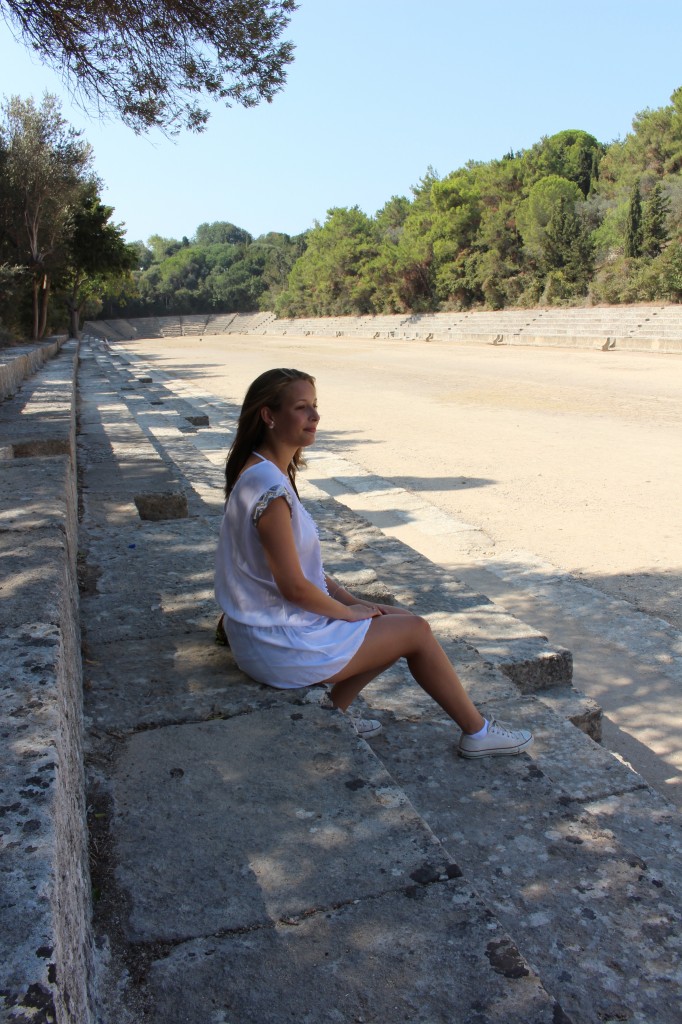 Ancient Stadium in the Acropolis of Rhodes

It is all very impressive and worth the visit!