Another weekend bring forth another opportunity to visit another Dutch City. If you read my previous blog post on Dordrecht you would know that my aim in the next year is to visit all the Dutch Cities! As I restricted of time I have decided to visit Delft, another city in South Holland and only a 20-minute drive from Rotterdam (and a 15 minute train ride from Rotterdam Centraal) (it is located between Rotterdam and the Hague).

After spending just a few minutes in the city I was already enchanted by its canals, boutiques and ambience. Delft is famous for its History, connection to the royal family (will deliberate on this shortly) and also known as a student city. 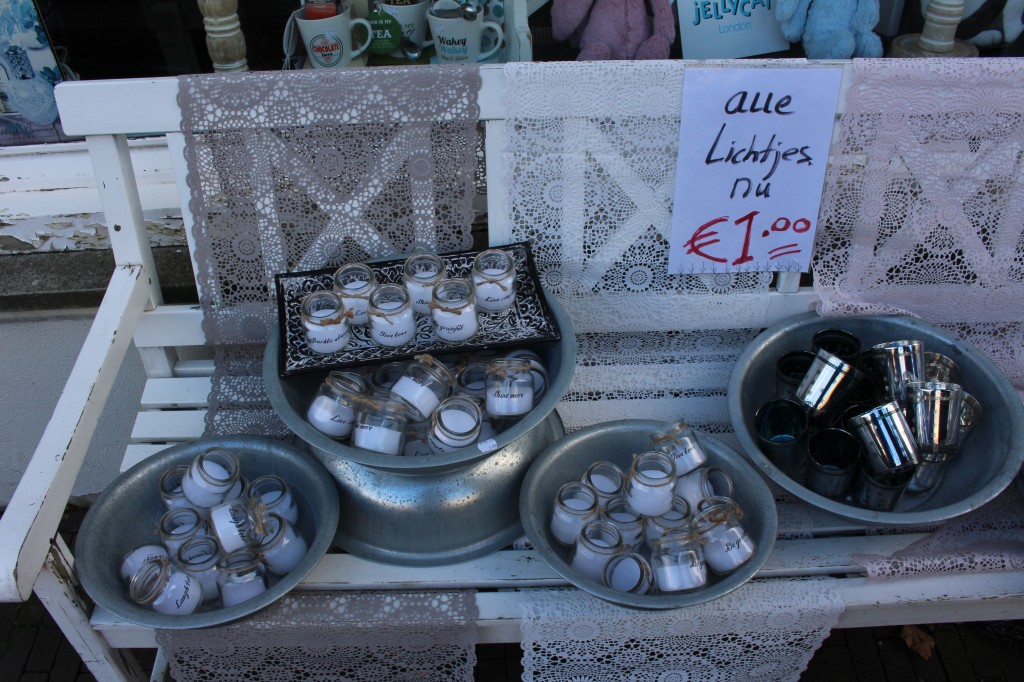 As I walked towards the center there were so many little shops with the most adorable and unique ornaments and things to buy. I couldn’t resist and buy a few Candles and Christmas presents on the way. 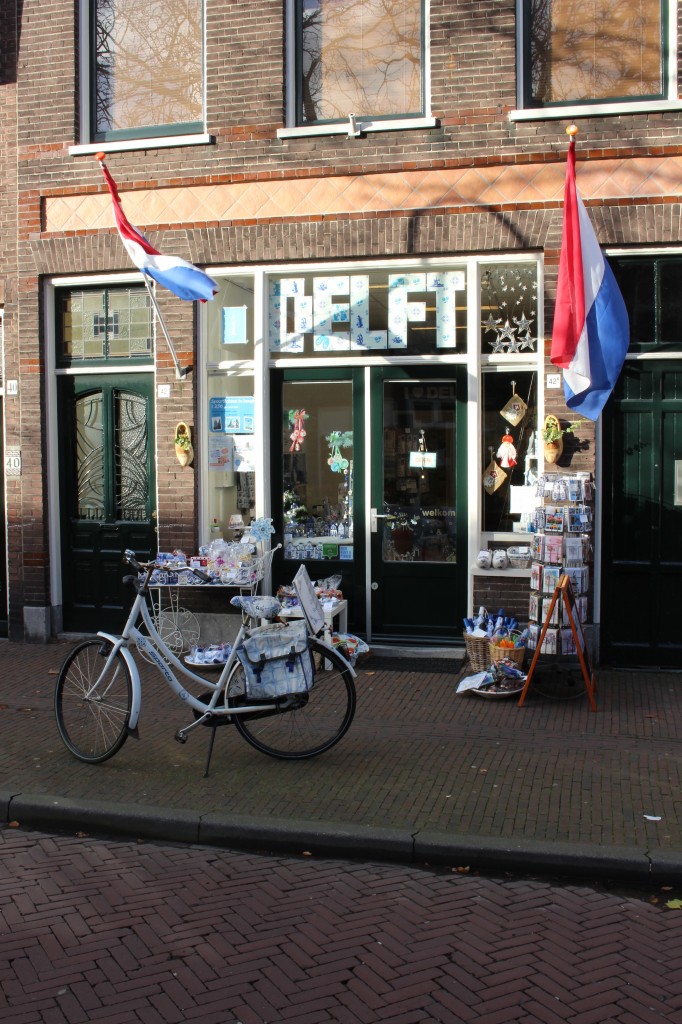 A little boutique shop in Delft, couldn’t help but take a picture!

They really sell everything, from souvenirs, to flowers, food, costumes, party decorations to almost anything else you could possible want! 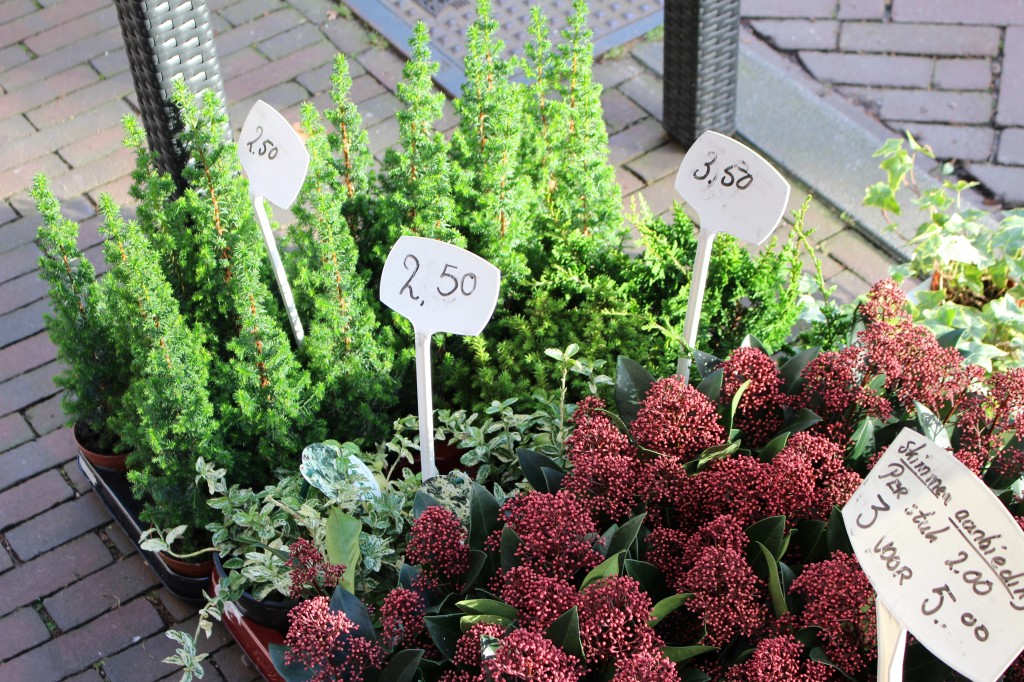 Shops selling beautiful plants along the street in Delft (some looked like mini Christmas trees!)

As we arrived at the main square called the Market I could see the City Hall in the distance. The Building is in the style of the Renaissance (designed by a Dutch architect) and was once where the city’s government operated from, currently it is the location of various civil weddings. 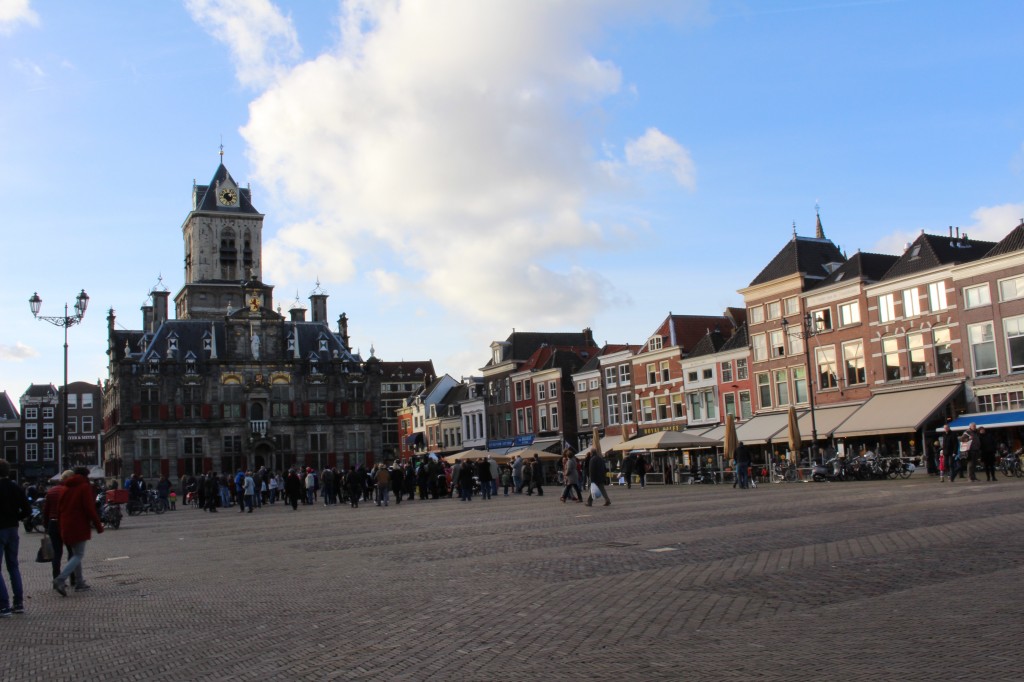 The Market square is ample with many café’s and bistros on either side; therefore one of the best places to have lunch as there is a big variety of choice. While walking around the square I came across several “Zwarte Piet” or in English “Black Piet”.  The celebration of Sinterklass or St. Nicholas is approaching in the Netherlands (on the 5th December) and we can already see it reflected in the holiday spirit. Traditionally on Sinterklaas, he arrives with several Zwartepiet from Spain who hand out cookies and candy to the waiting children. The most traditional cookies and some of my favorites are; pepernoten and kruidnoten.

On the other side of the MarketSquare you can see the NieuweKerk, which is translated to the New Church. This is a protestant church and the burial ground for the House of Orange-Nassau (the royal family). 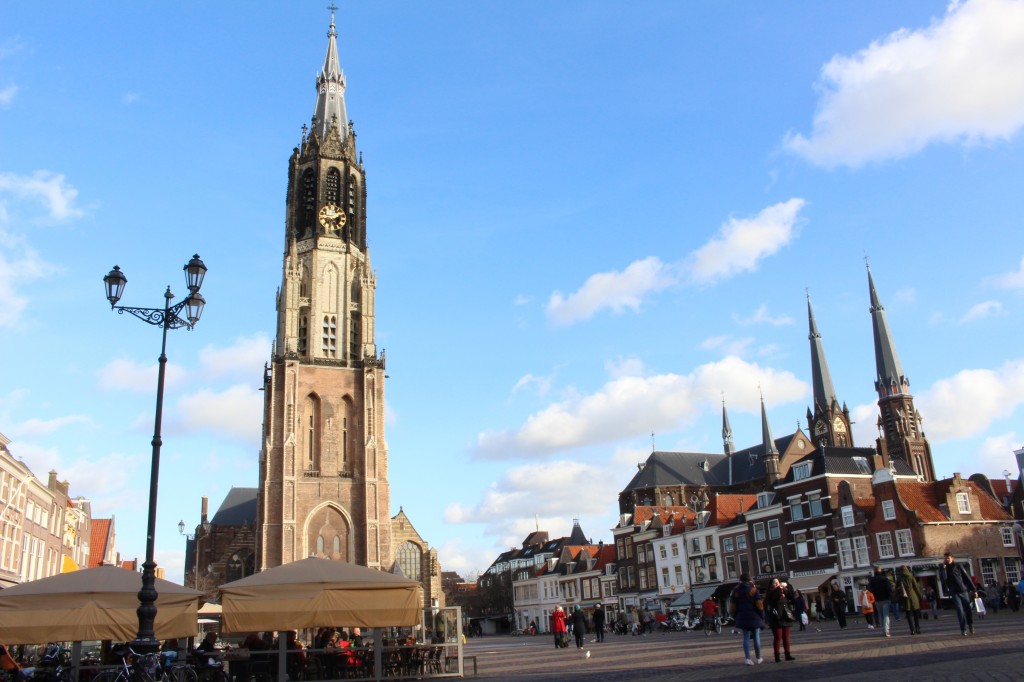 The NieuweKerk or New Church at Delft

The Church is open to visitors; you can purchase an admission ticket that is also valid for the Oude Kerk. The church is large on the inside and holds a lot of history; from old bibles and artifacts to the burial ground of the Royal family. 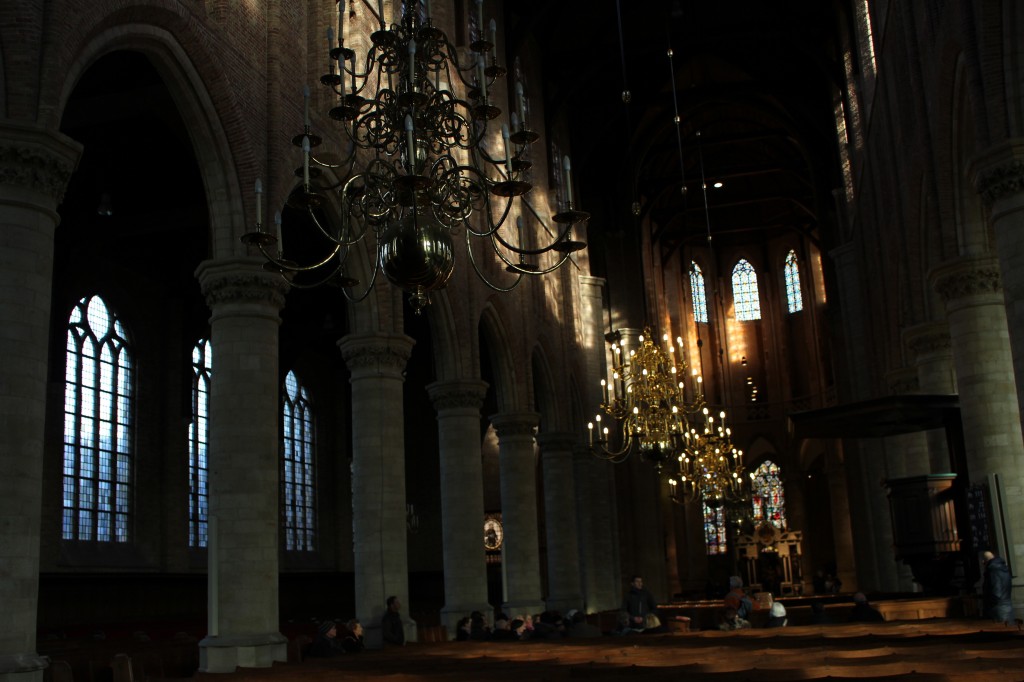 Inside the NieuweKerk in Delft

The Burial ground of the Royal family is sealed by 5,000kg stone and is only opened for the funeral of a member of that family. Only they are allowed into the tomb, which is covered by a rock. When the rock is lifter there are stairs leading to an open space (I saw this on a video that was playing next to it). 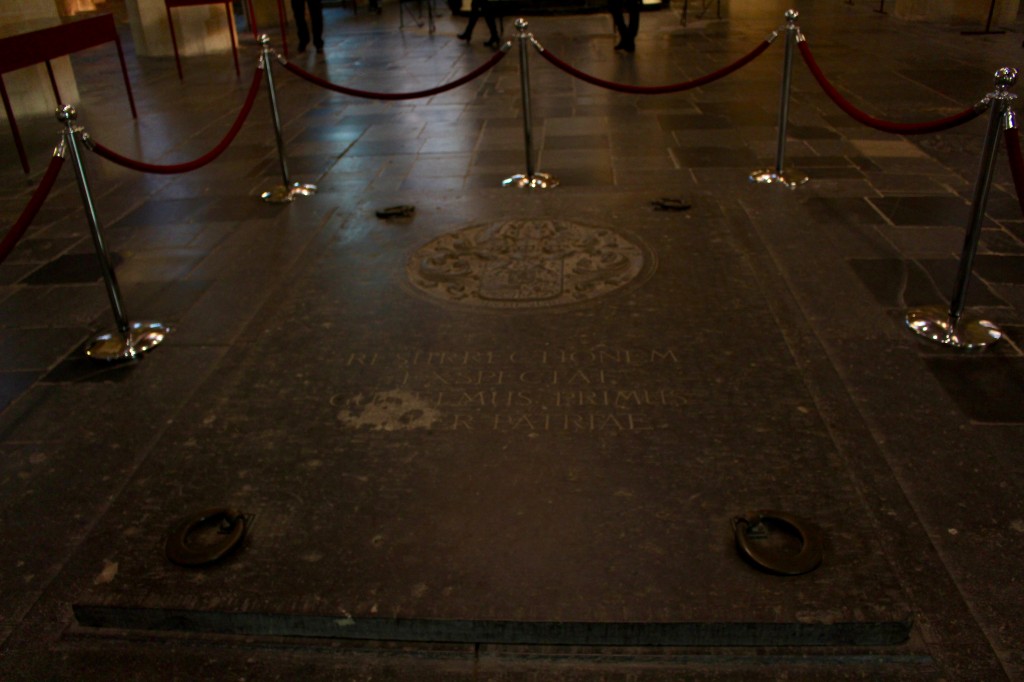 The entrance to the family crypt of the royal family

The Church also has a tower which is the second highest in the country after the Dom Toren in Utrecht (For more information visit that Blog!). The Church was actually called St Ursula in the 14th Century and was built between 1396 and 1496 by the same man who built the tower in Utrecht a few years later. The church is currently under restoration. 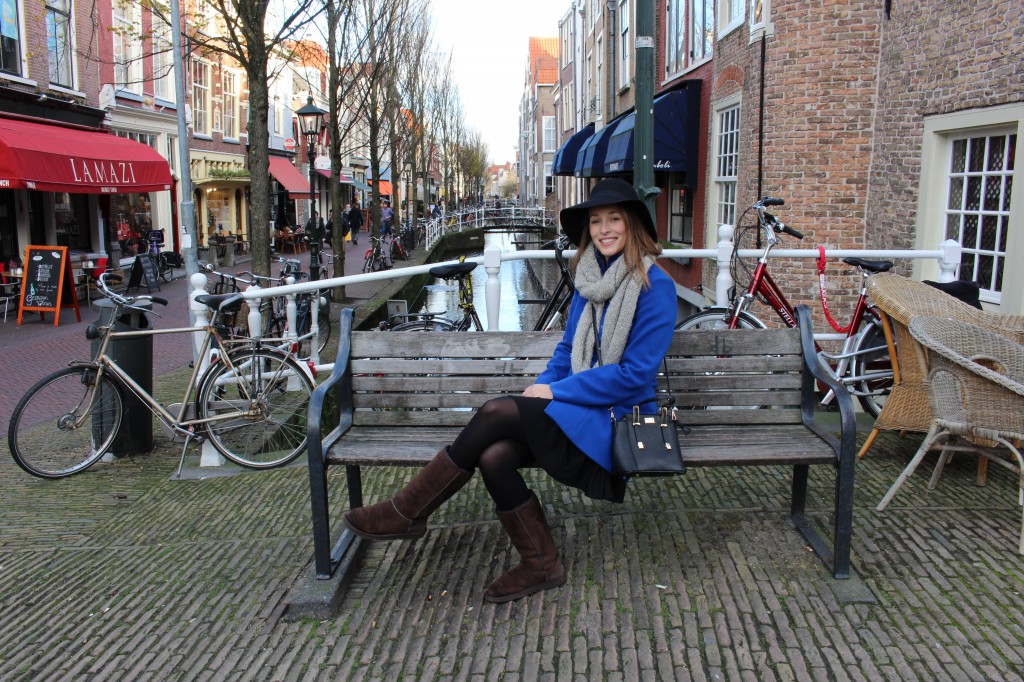 Me enjoying a chilly afternoon in Delft, South Holland

After the NieuweKerk we headed to the Oude Kerk or Old Church which is a few blocks away. 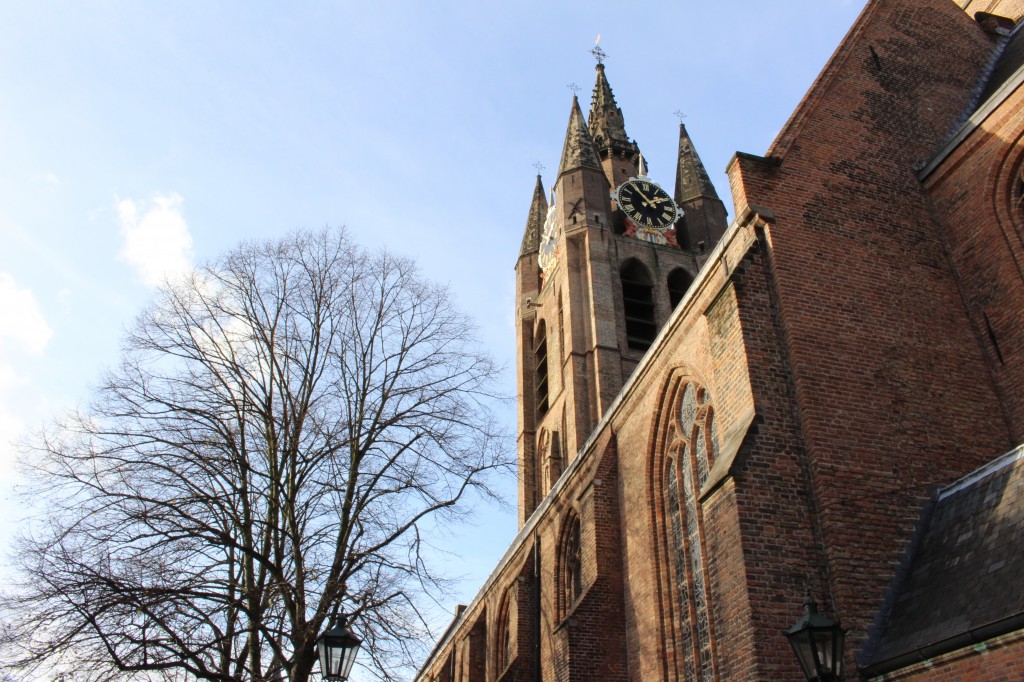 The Oude Kerk is also a protestant church famous for its slightly leaning tower (that is 75metres high).

The tower was not built this way on purpose but was the result of a weak foundation. This church holds the graves of or poets, heroes, painters and some other people who have made an impact on the Netherlands. It is furthermore home to a pipe organ and currently exhibits photography.

After having visited the Churches, shopped, and had some Kibbeling at a traditional Dutch seafood stand, we headed over to the market. The market is on Saturday’s (on the Brabantse) and you can find almost anything and everything fresh made and artisanal! There is also a flower market and a general market on Thursdays and an Antique market on Thursdays between April and October (too bad I missed the season!)

There are of course the French fries, which you need to try as they (in combination with the mayonnaise) are different in the Netherlands from any other place in the world. If you run across a stand that sells Oliebollen you must definitely try them, as they are popular in the festive season and more specifically a tradition for new years. Oliebollen are dough that sometimes contains raisins that is fried and served with a lot of powdered sugar (usually one is more than enough) and best eaten fresh and warm! 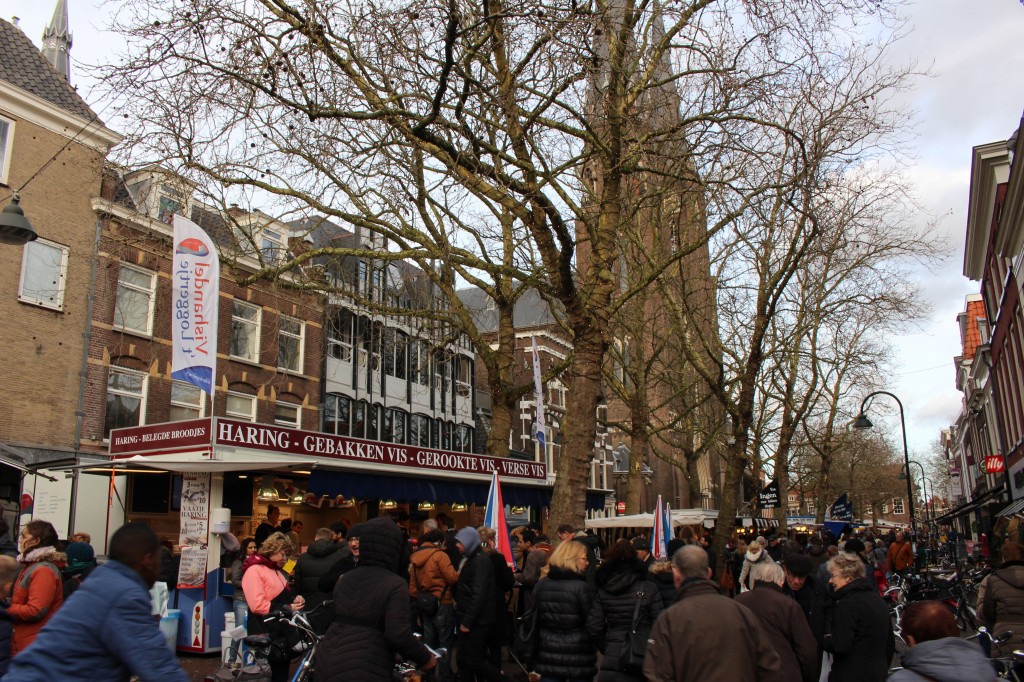 The Saturday Market at Delft with the NieuweKerk in the background

This time of the year the sun sets very early so it quickly became much colder as the sun began to go down and I headed back to the car. It was a perfect afternoon in Delft and will be back in spring to enjoy the many terraces and canals!

Looking for a hotel located in the center of Rotterdam? Book a room now.