With the summer days being consistent I decided to continue my Dutch bucket list of cities as time is running out and I will soon be heading towards South America! With already having seen most cities in the middle and south I decided to head East and went to Arnhem. It is part of the Province of Gelderland and is located on the banks of the rivers Nederrijn and Sint-Jansbeek. It is considered one of the larger cities in the country and I had no idea what to expect from it.

Walking from the central station towards the city centre

The first thing I noticed about Arnhem is that it seemed quite modern and fresh with several terraces and a modern looking train station. 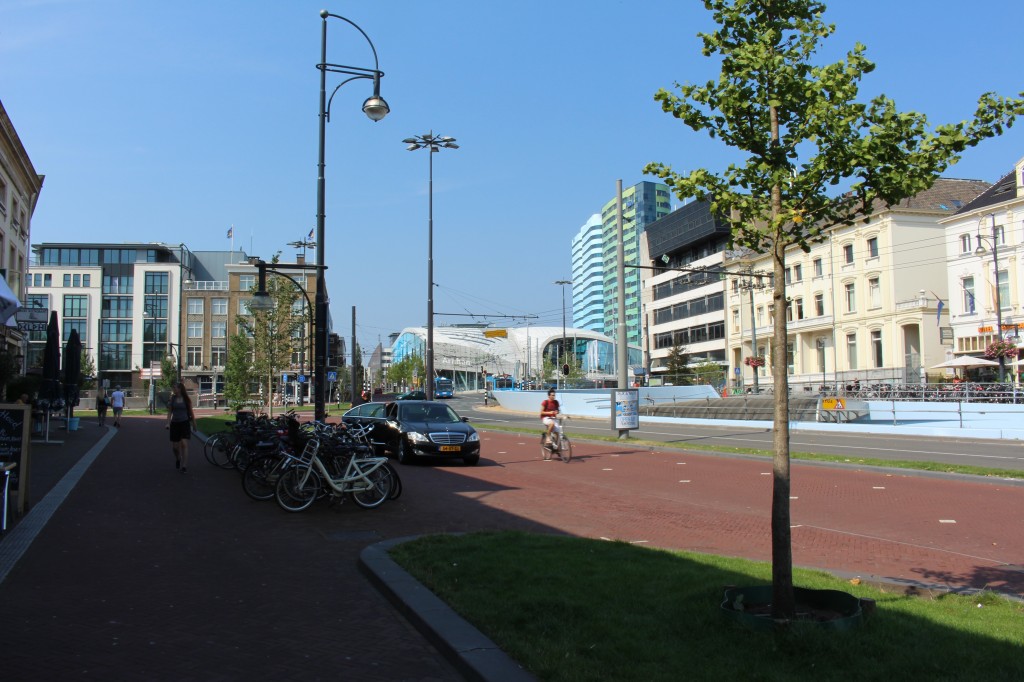 It took approximately 1 hour and 45 minutes by train from Rotterdam to arrive in Arnhem therefore I arrived around lunch time and settled down for lunch on a square called the Korenmarkt which was filled with restaurants, a cinema and a few shops. 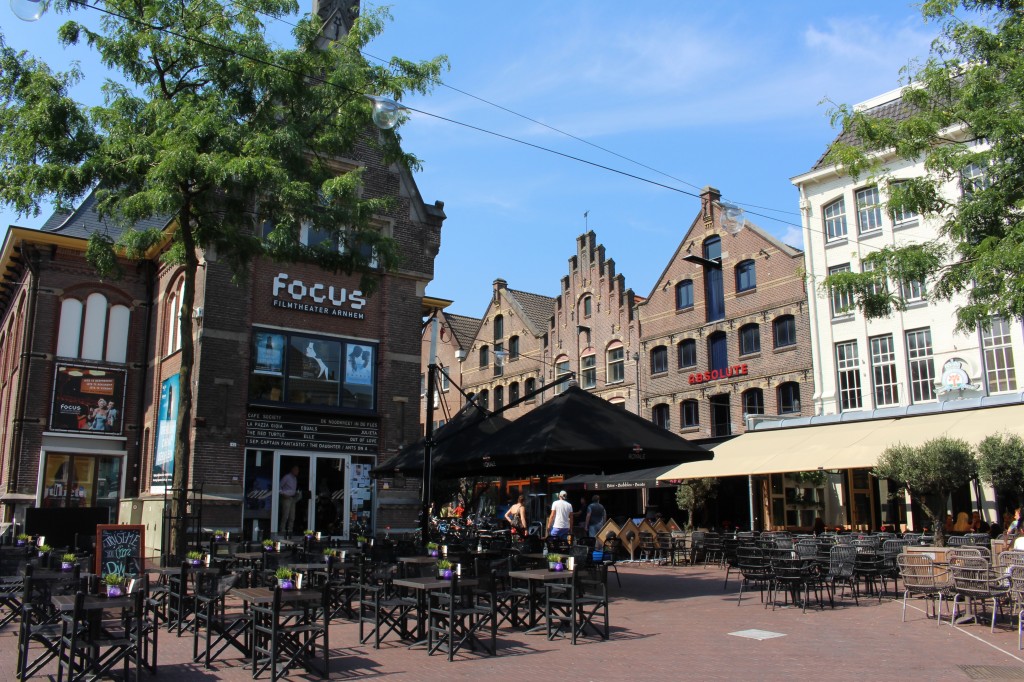 Korenmarkt in Arnhem on a summer day

I had a club sandwich and must say It was pretty delicious and I recommend it, good ambiance and close to both the city centre and also the train station.

After lunch I walked towards the old city centre guided by the sign posts located around the city, which make it really easy to find your way around. 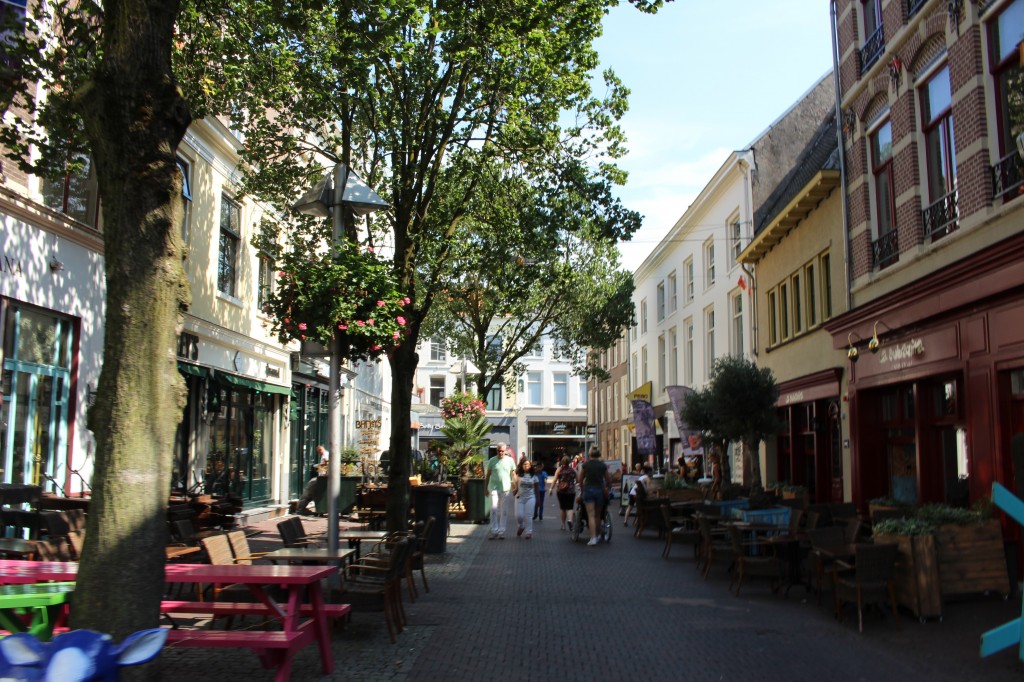 Streets of the city centre of Arnhem.

There are many popular squares with terraces and restaurants making it the perfect place to go on a summer day and go from one to the other. One of those squares is Jansplein. 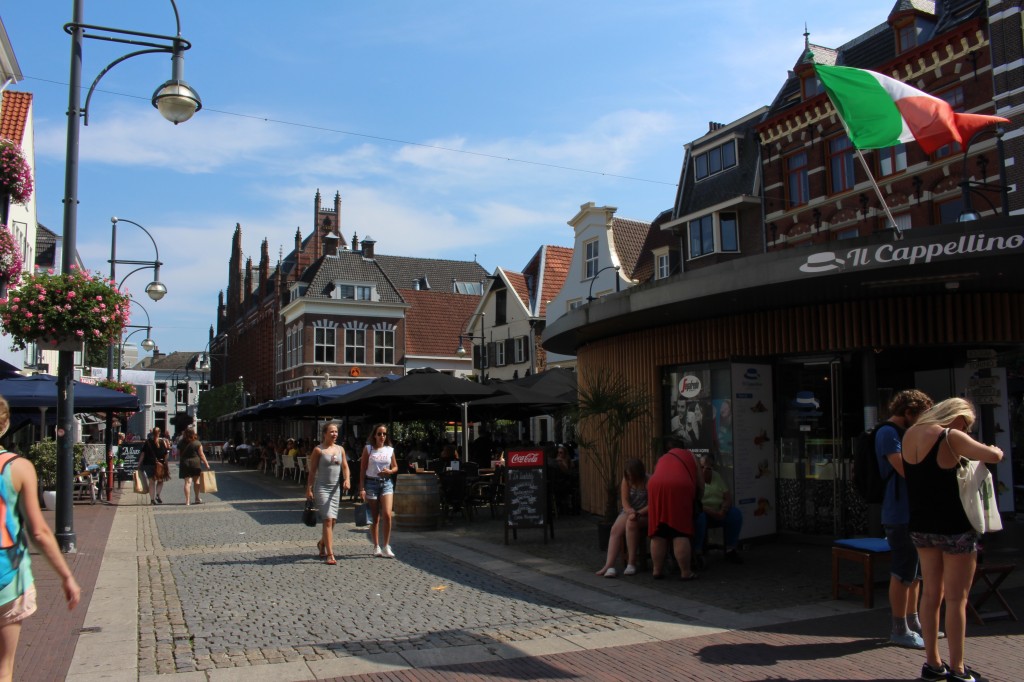 Jansplein in Arnhem, The Netherlands

Even the shops and offices are located in beautiful old buildings!! I couldn’t stop staring 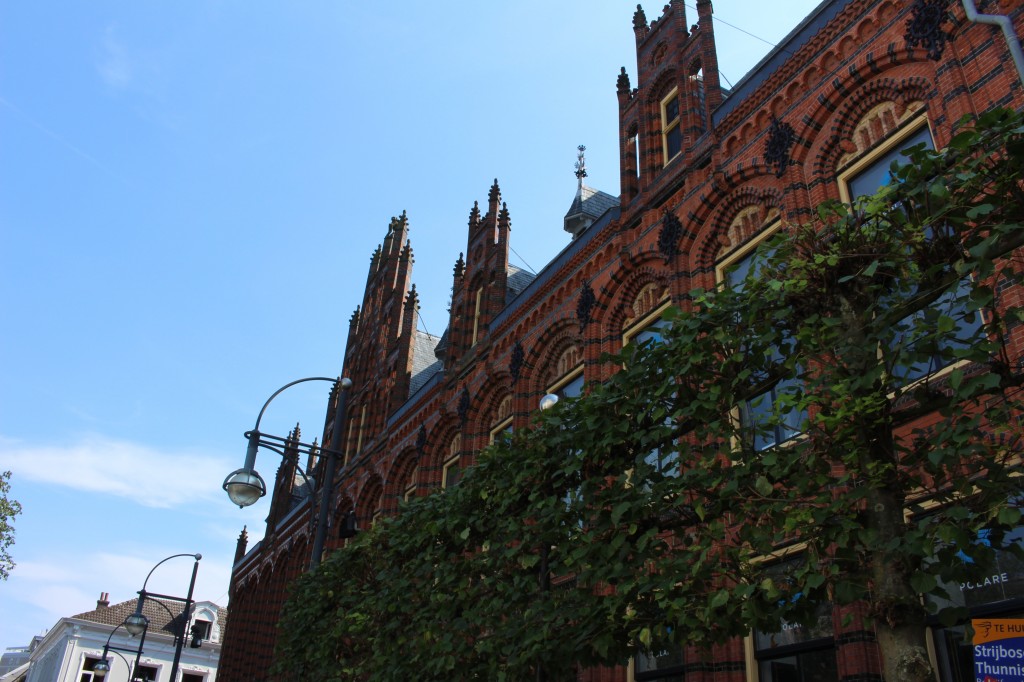 Shops on Jansplein in Arnhem, The Netherlands.

If you keep walking you come across the typical shopping street in most Dutch cities with the usual shops on both sides. 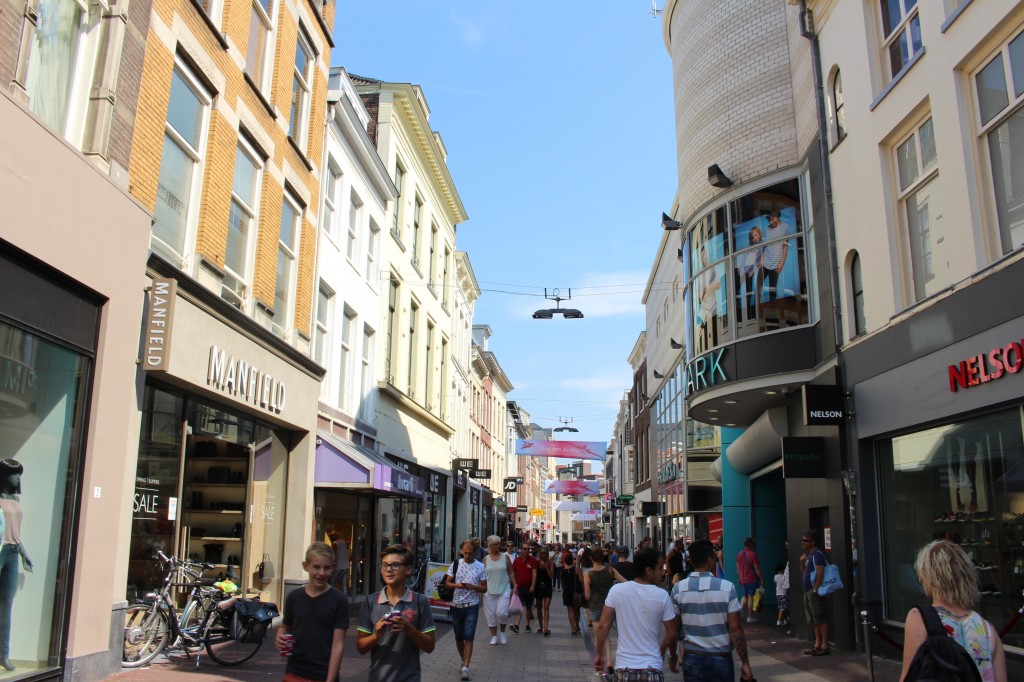 Only a corner away there is the Grote EusebiusKerk in Arnhem or just the Grote Kerk. St. Eusebius church is English is 93 metres high and is the highest and largest building in Arnhem, it can be spotted from almost any angle in the centre.  It is possible to visit the church and take an elevator to its highest point where the view of the city can be seen. Not only is the panorama an attraction but it is also possible to visit a crypt where full skeletons are kept. The church that can be seen was reconstructed between 1946 and 1961 after damage during bombing in the second world war causing the church tower to collapse. Since then the elevator was added in 1994 to allow visitors past the bells and to the views from the top. 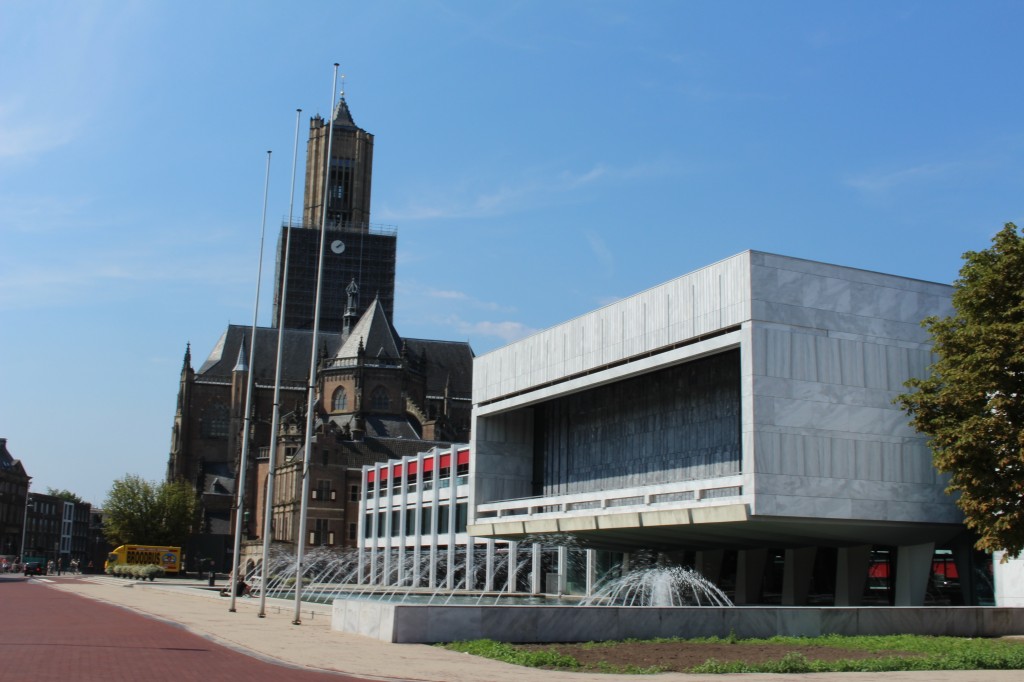 The Grote Kerk and Stadhuis in Arhmen, The Netherlands

Facing this church is the Stadhuis which can also be seen in the picture above. Unlike most Dutch cities the Stadhuis or town hall is modern and gives an interesting contrast between the church and its modern building with fountains.

Near the Stadhuis you also find the Duivelshuis which was built in 1518. It was bought by Maarten Van Rossem in 1538 after its previous owner died and is what we see now. It was then converted to be a part of the city hall since 1830. It is the only part of the original city hall that is still left standing after the second world war when the rest was damaged. 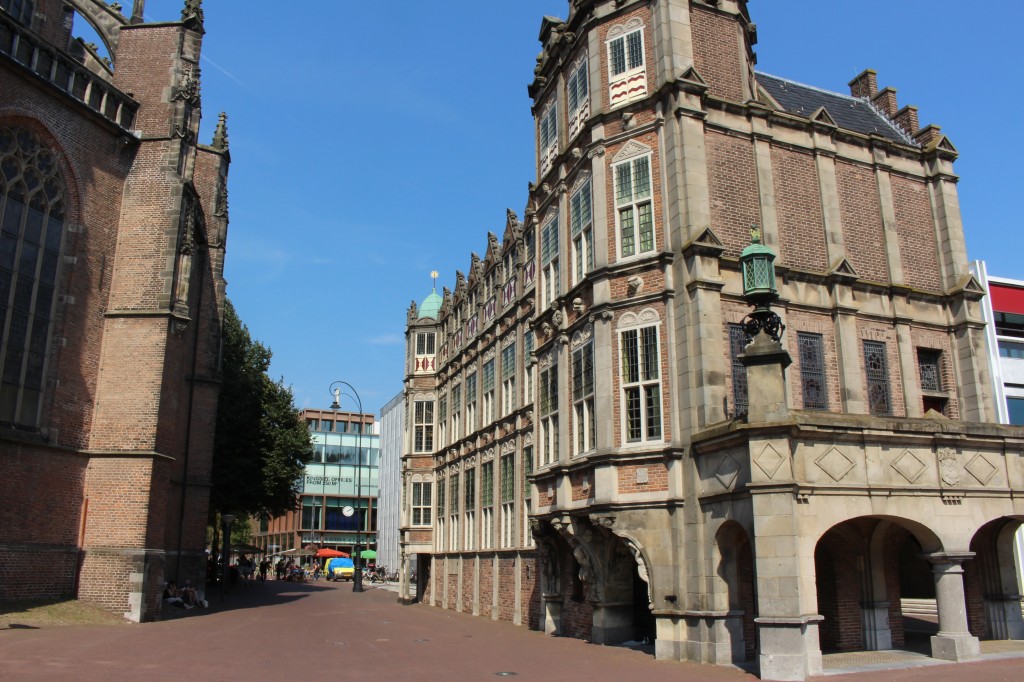 A few minutes’ walk from the Duivelshouse is the Markt or the Market Square of the city which is currently under renovation. Leading away from the market and towards the river is the Sabelspoort, the only city gate from the middle ages that was preserved.

This gate protected the city from the East and used to have a larger distance with the river Rhine than it does now. During its early years this gate was taken over by different people allowing them access to the city. The gate also had more purposes such as being a toll house and its vault became a prison. The prison located in the vault was unlike modern prisons and was said to be a place where torture took place. After being used as a prison it was also where “crazy” people were locked up. 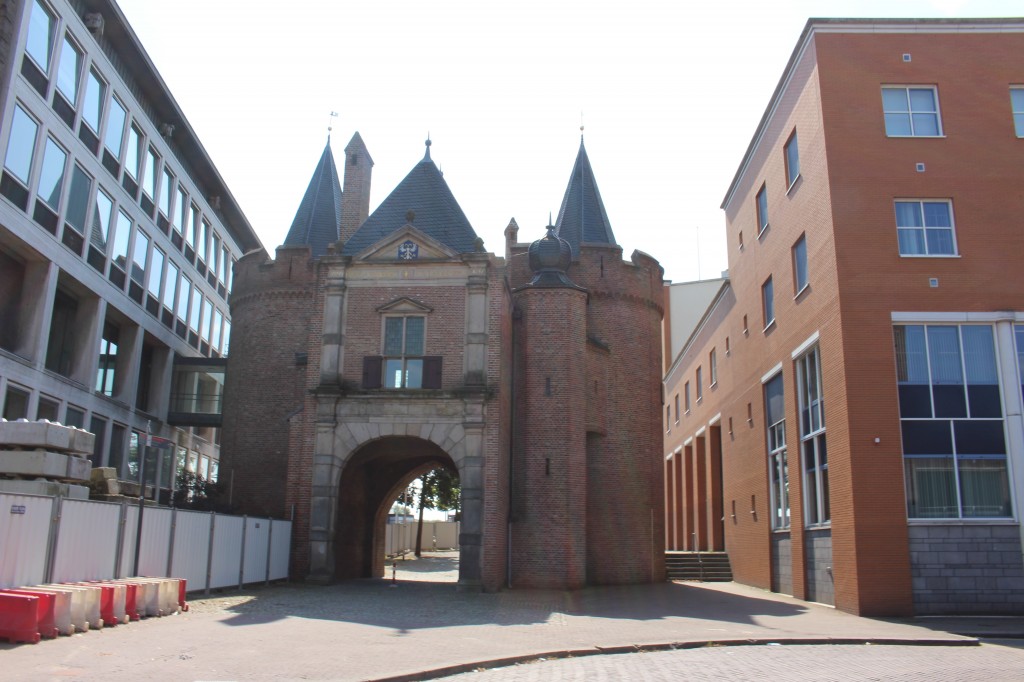 It is quite overwhelming to think of all the horrific things that must have taken place here. On the other side of the gate is the Rhine river and the famous and iconic John Frost Bridge.

This bridge is probably the most famous thing in Anrhem and is named after the British General that defended the bridge during the battle of Arnhem against the Germans (during the Second World War).  The bridge was bombed by mistake (the original target was the other bridge). Most of the bridge was destroyed but then was reconstructed to what we see today.

This bridge was actually featured in a movie called “A bridge too far”!

When looking at the other side of the river I could see beaches and people swimming! It didn’t even look like Holland to me as the vegetation is so different. 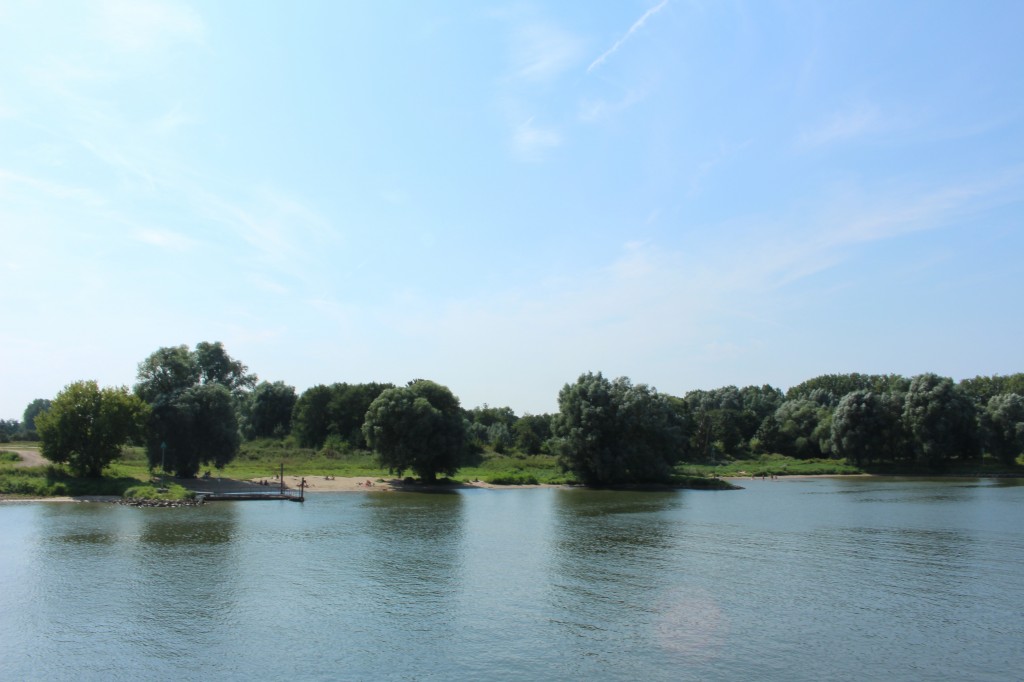 Beach at the river Rhine in Arnhem

Along the river is a street full of colourful terraces and café’s another ideal place for a summer day. 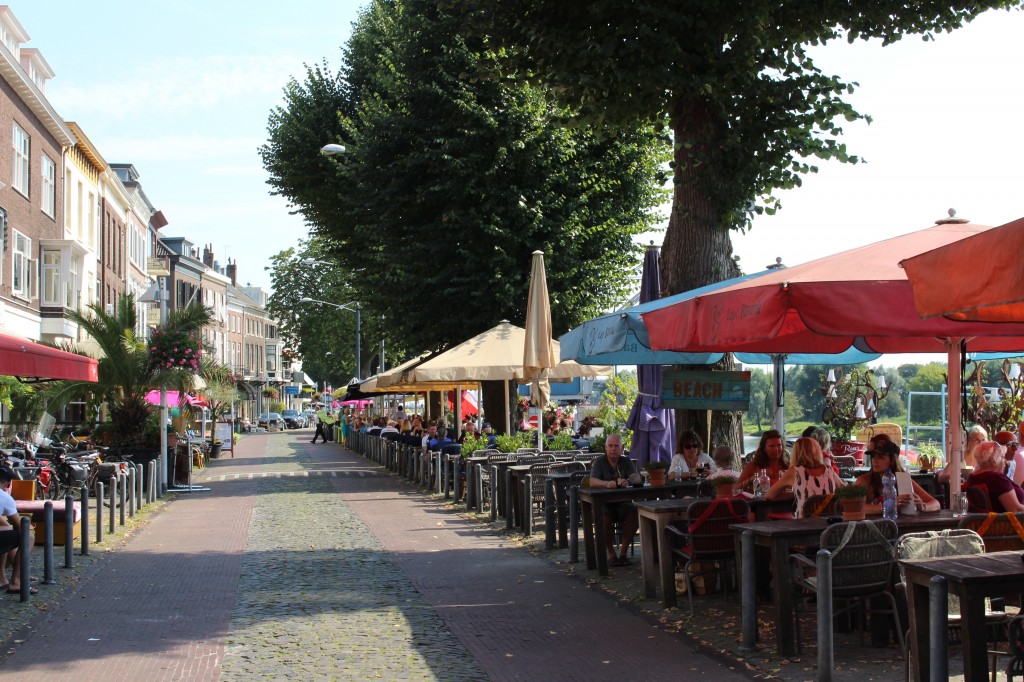 Rijnkade along the Rhine river in Arnhem

It took only about 30 minutes from one side of the city to the other, it was not very big but full of all kinds of things to see and a nice place to visit with friends for a dynamic day. A tip is that it is usually warmer here than on the coastal cities on Holland! I went on a Saturday and it was 30 degrees.