During my time in Rhodes (Greek Island) this summer I spent a lot of time lounging on the beach but at some point you also want to get up and do things. Know that feeling? Well luckily Rhodes has quite a bit to offer other than beaches and sun and fantastic weather. I was there with my family and we rented a car for the day and decided to drive to Lindos, a town located approximately a 45-minute drive from where we were staying in Ixia. If you can, rent a car as this gives you the freedom to stop at places along the way although it is also accessible by bus and taxi or even boat.

Lindos is an archaeological town located on the East side of the Island of Rhodes, its main attraction is the acropolis!

The scenery on the drive to Lindos

The drive was really nice with nice scenery and very little traffic. We had a map of Rhodes but let ourselves be guided by the road signs, some are only in Greek however you start recognizing the letters after a while.

Almost before arriving at Lindos there is a really great spot where you can stop the car and take a picture of the town at a distance, make sure you stop! It’s worth it.

When we arrived at Lindos around midday there were many people arriving at the same time and a bit challenging to find parking despite the availability of both paid and free parking. The free parking areas are all at the bottom of the hill therefore I highly recommend the paid parking which was only like 4 euro a day and you don’t have to walk too far to reach the entrance to the town.

On the short but warm and slightly uphill walk from the parking to the entrance of the town there is a very Greek looking restaurant where we sat and had some refreshments before taking on the town! 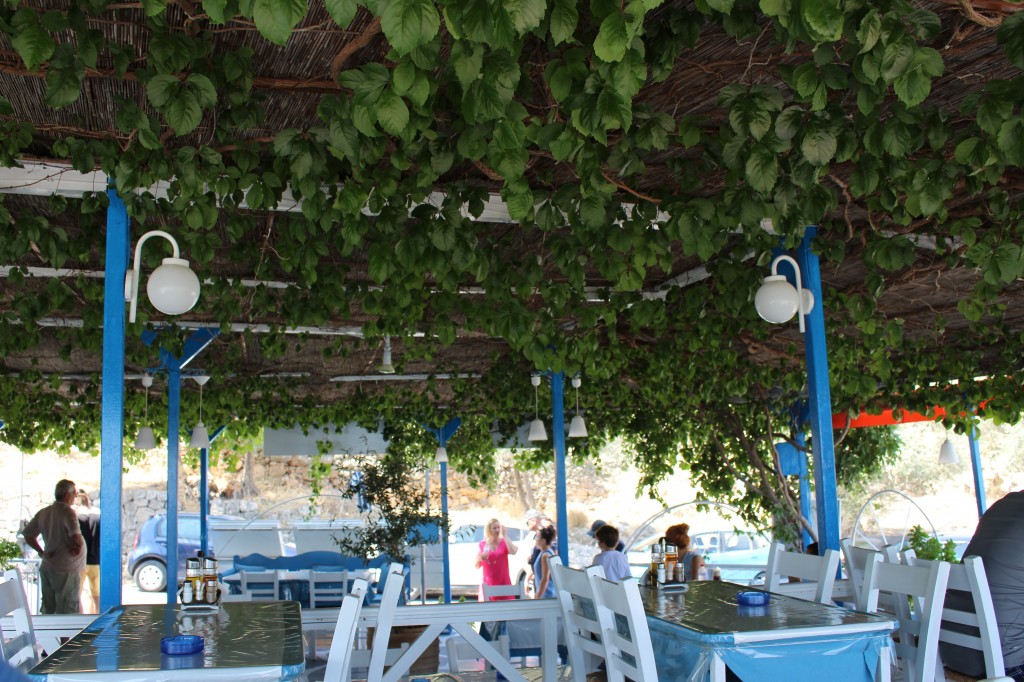 A restaurant at the entrance to Lindos in Rhodes, Greece

The entrance to the town was packed with people, no matter at what time you arrive its busy! 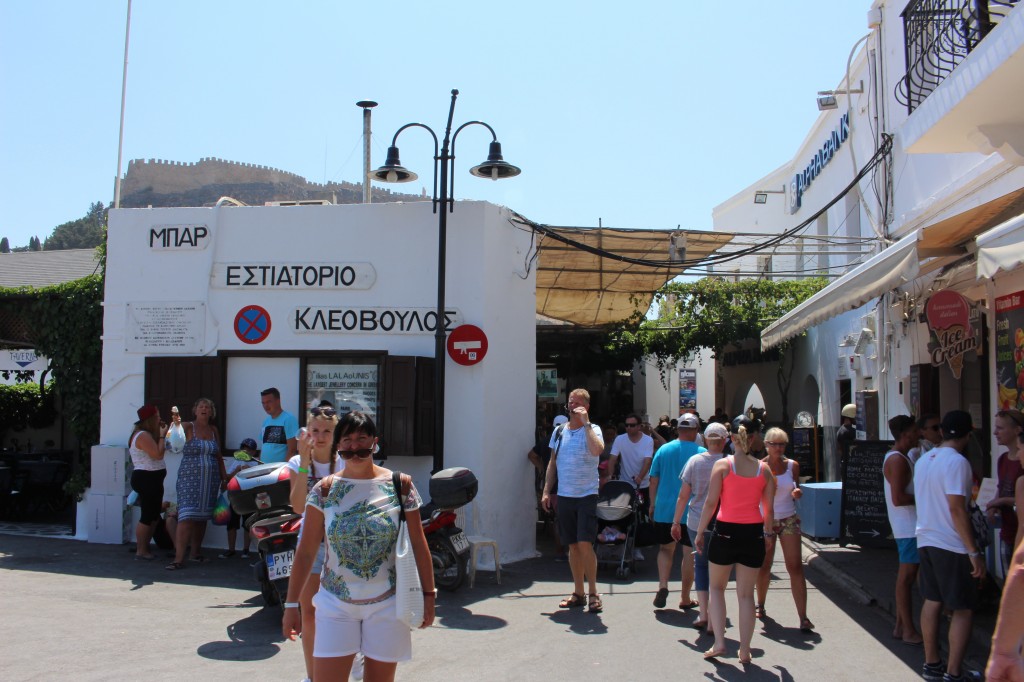 Entrance to Lindos in Rhodes

When entering the town you come across a donkey stand area where you can go by donkey up to the Acropolis of Lindos. Do not doubt it, take the donkey! It costs 5 euro one way and takes approximately 15 minutes (I did feel bad for the donkey though). The climb up to the acropolis is challenging because of the extreme heat (And there was absolutely no breeze). 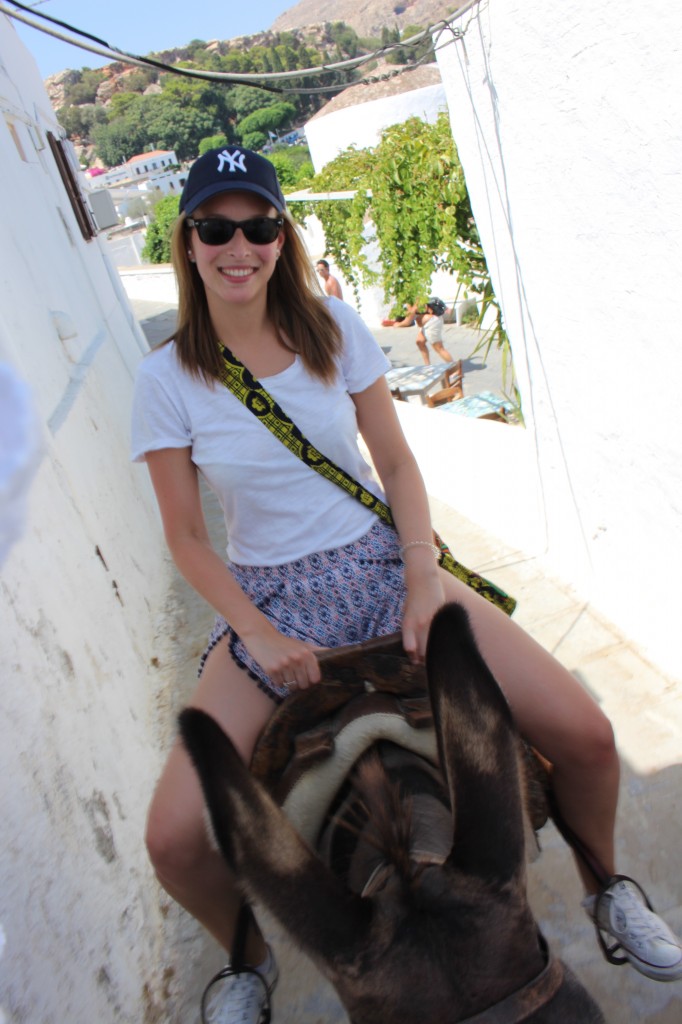 Riding a donkey up to the Acropolis of Lindos

The donkey ride up to the Acropolis of Lindos

When you finally reach the top all you have to do is go up some steps, pay the entrance fee of 12 euro per person and you are in! Without even having seen the main areas of the acropolis, I was already impressed with the view. 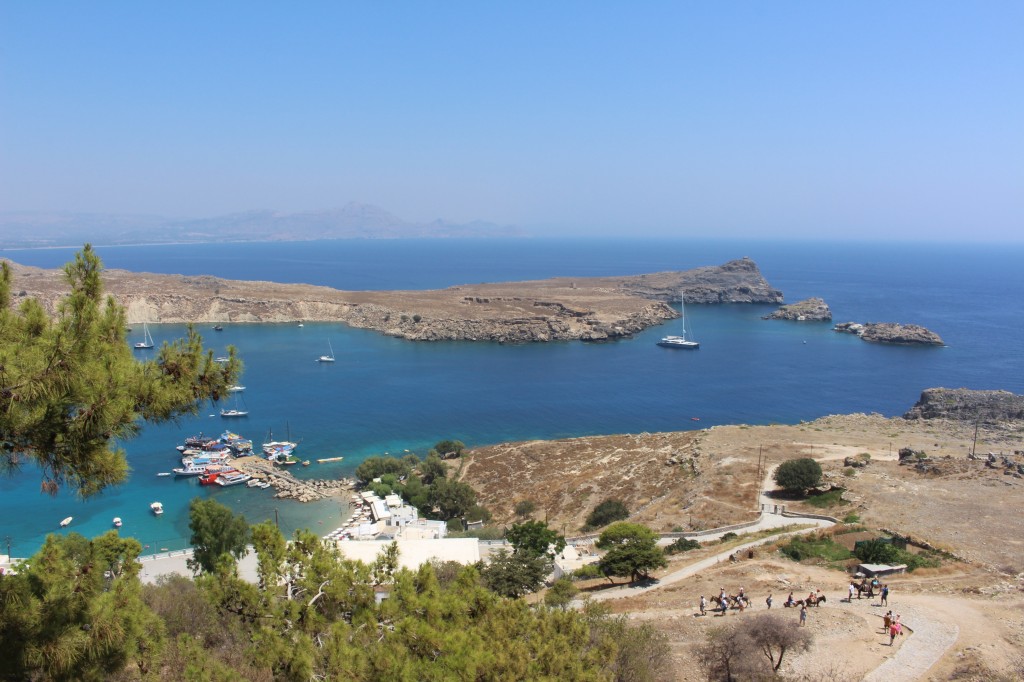 View from the Acropolis of Lindos

You will have to go up several more steps to enter the acropolis and when you do you will be surrounded by ruins and by history! 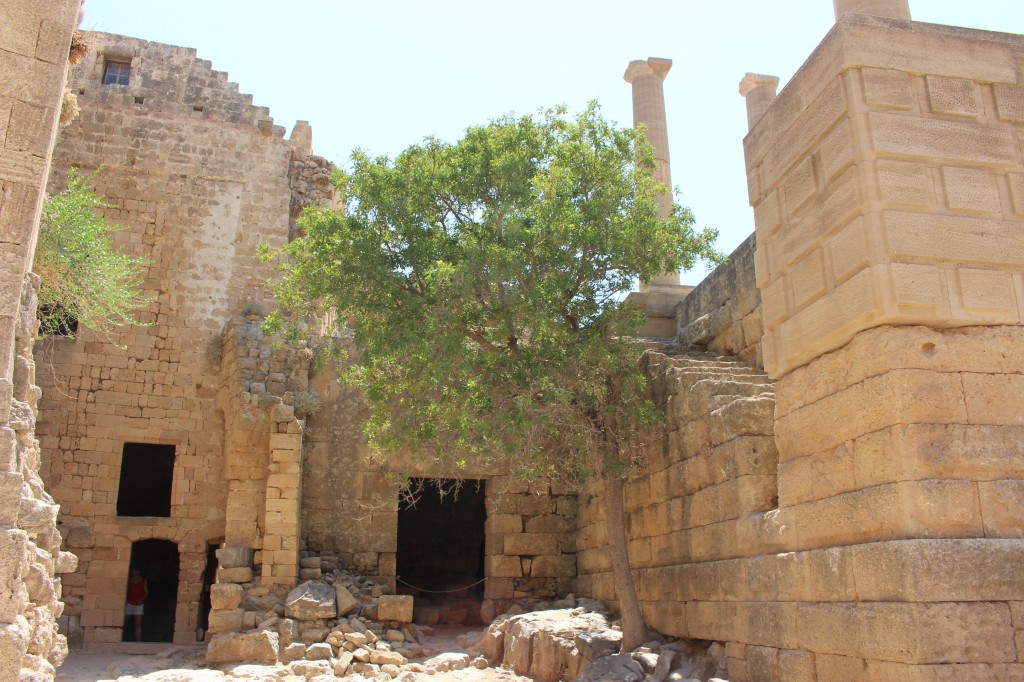 Ruins at the acropolis of Lindos in Rhodes

You can walk upwards either through the inside or the outside although beware of not tripping over stones! 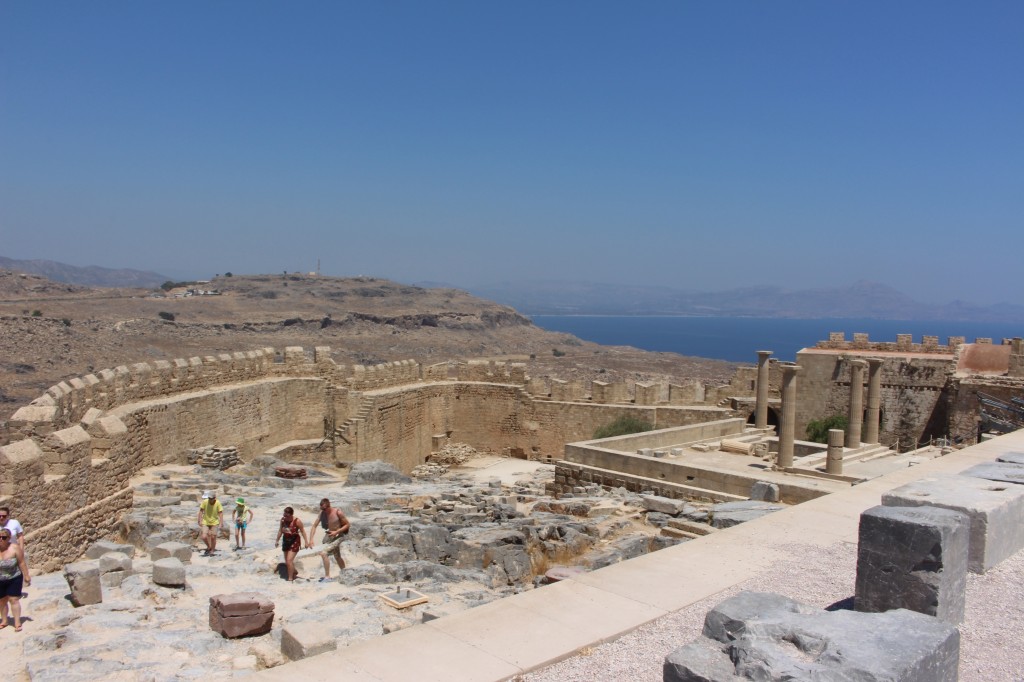 The Acropolis of Lindos, Greece

As you continue you will come across a temple… 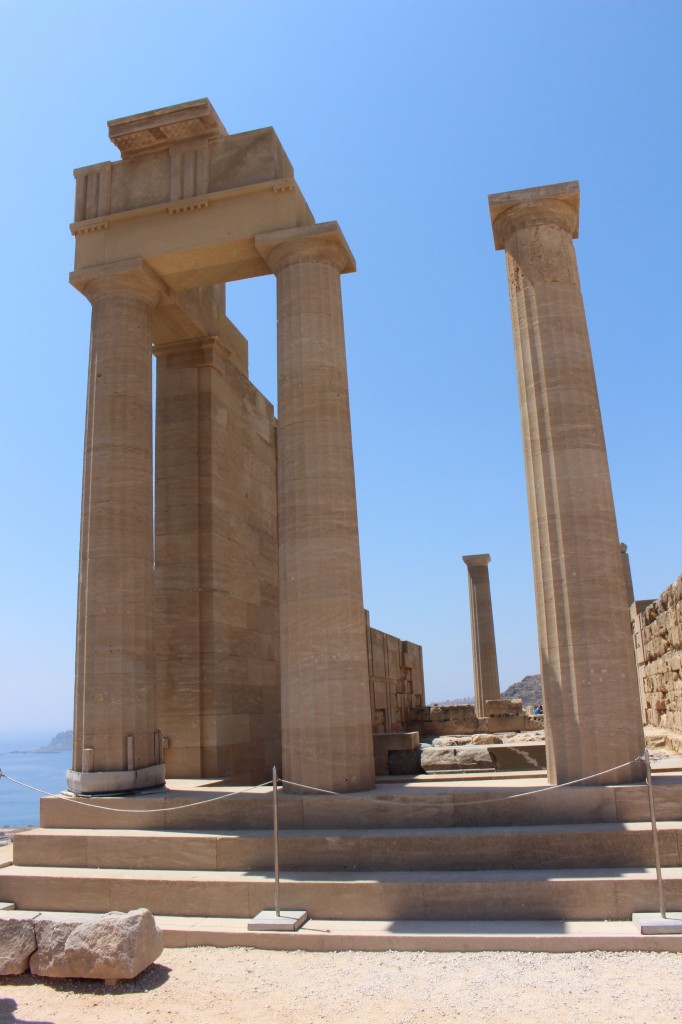 Temple at the acropolis of Rhodes

And an absolutely breath-taking view! 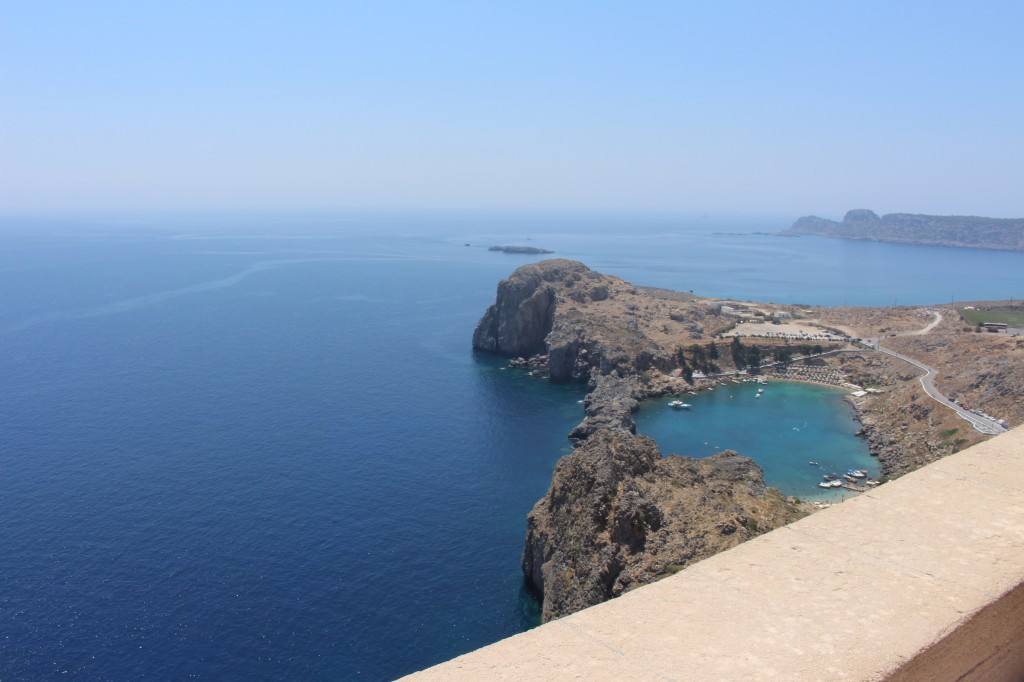 So many shades of blue, how beautiful is Greece!?

As you keep going it is simply astounding the contrast between the sky, sea, the ruins and all the history. 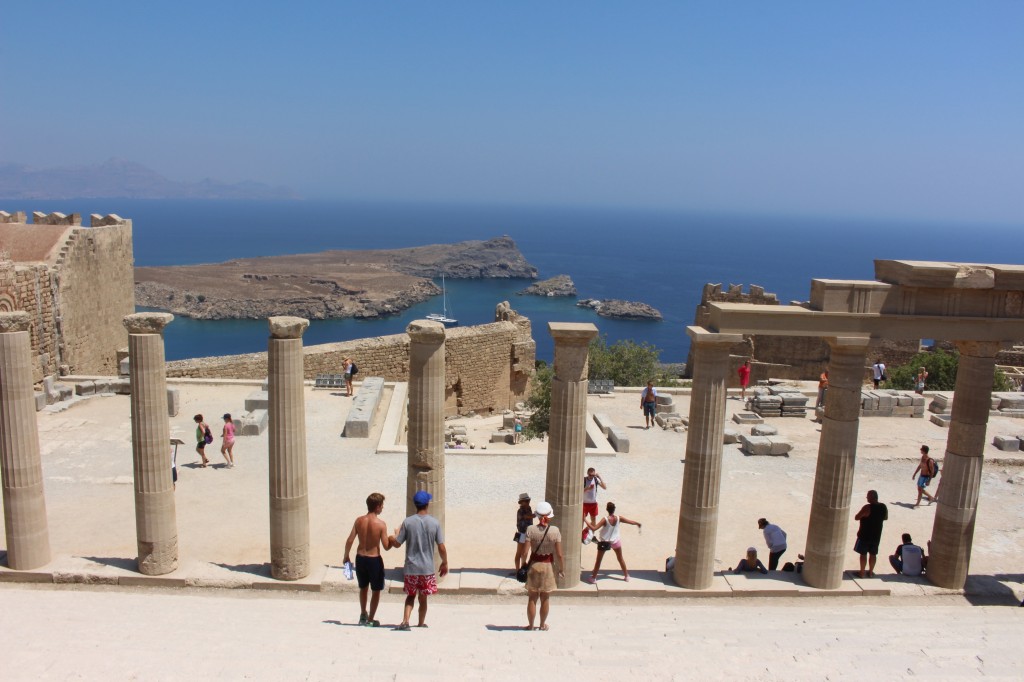 Acropolis of Lindos in Rhodes, Greece

This citadel that was fortified by the Greeks and many others dates back to the years BC. There are several parts that can still be distinguished within the acropolis such as the Doric temple, a sanctuary, the Hellenistic stoa and its columns, the Hellenistic staircase, remains of the Roman temple and the castle of the knights of St John. 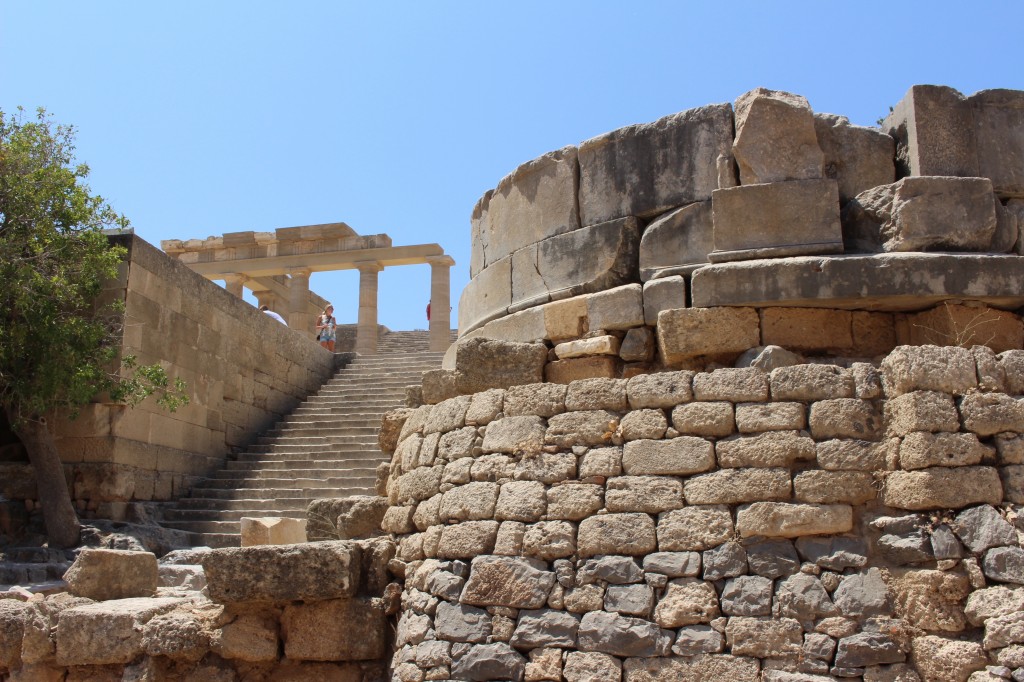 Ruins in the Acropolis of Lindos

It takes approximately 30 minutes to walk around the acropolis although if you want to look at every aspect in detail and read its history it will take longer. 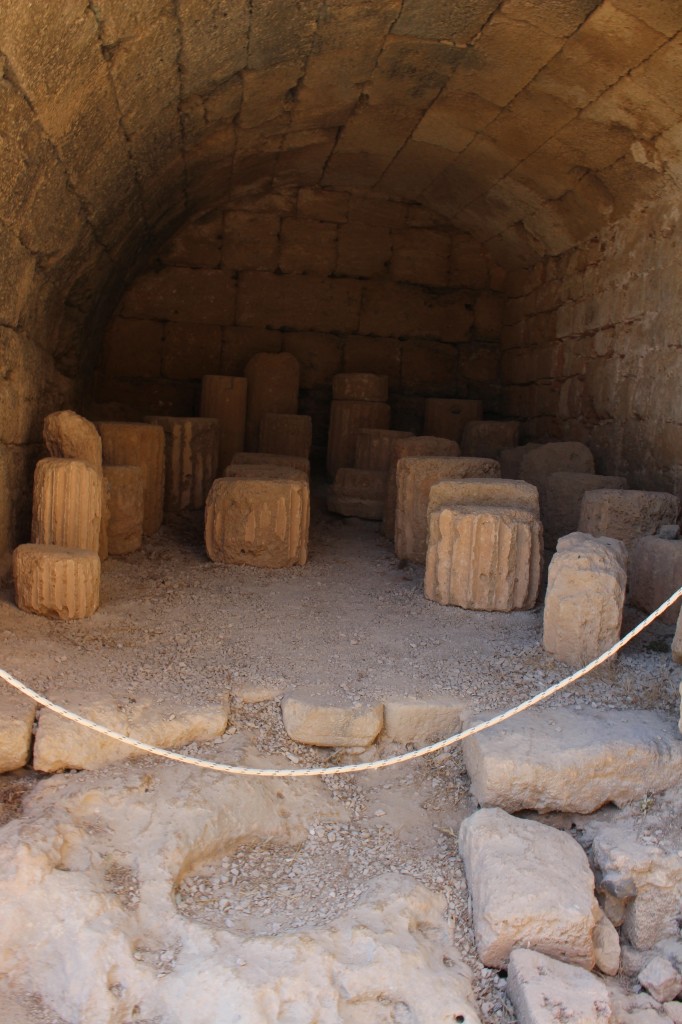 The Acropolis of Lindos has so much history! Its incredible to think how long it has been around.

I must say that I have never quite felt so overwhelmed by the heat and sun as I did while in Lindos. I highly recommend you take some water or ice tea with you when going up to the acropolis and wear a hat, sunglasses and sunscreen! It is famous for being one of the hottest spots in the island and you often see people trying to find shade, which is very very rare in the acropolis. Also wear comfortable walking shoes as there are loose stones and you could easily twist your ankle while walking around.

When you are done seeing the acropolis don’t take the donkey downhill but walk instead. Be warned the stones are a bit slippery but it is a nice walk where you get to see more of Lindos. 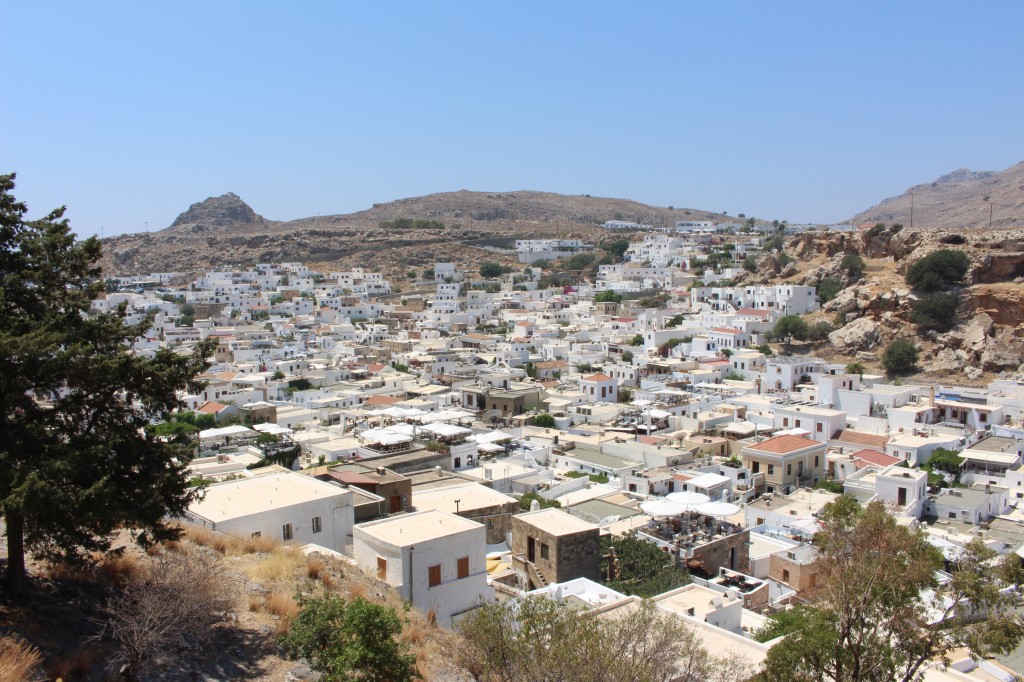 The view of Lindos while walking down from the Acropolis

Most of the way is also shaded and at some point you reach the town with all the little shops with all kinds of beautiful jewellery, clothes, carvings, etc. 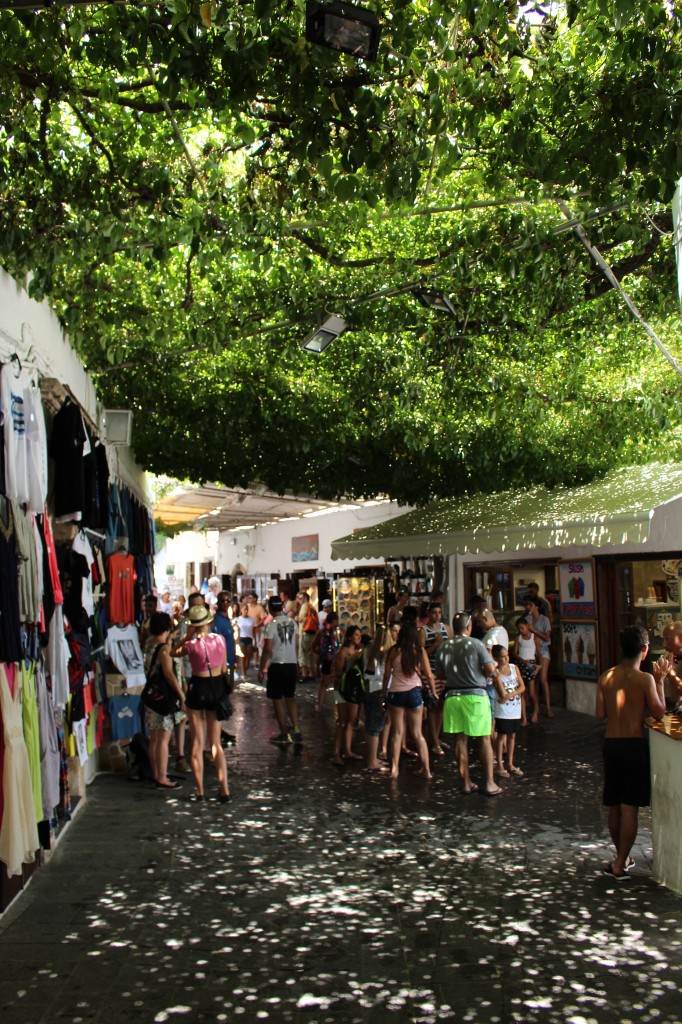 Lindos is a place that simply must be visited when in Rhodes! It is very different to the town of Rhodes and is not far away! For lunch you can either stop here or at a restaurant in the towns along the way back to see some more as Lindos is very busy! 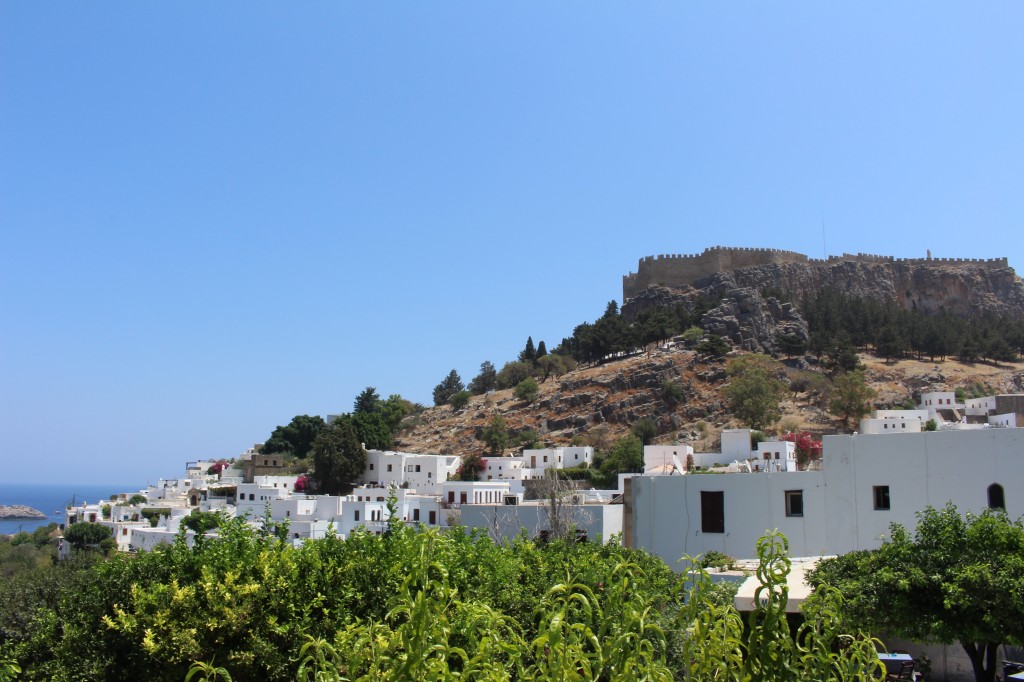 Lindos with the acropolis located at its top.