Unfortunately my time in London has come to an end – well, for now at least. Next stop: The Netherlands. Did I mention that I come from Rotterdam? Although it is my city, I have never had a chance to properly get to know it, however I have had a busy weekend and for those of you who like architecture the following are my recommended top 10 to see!

1. Rotterdam Centraal Station
The new station was recently opened in 2014 after beginning construction in 2003 – it took 11 years! I must say that for a city with so much architectural diversity the station finally does the city justice! This is a key point in the city with national and international railway services, trams, metros and buses. If you visit you will most likely arrive and leave from here.

The station is so large it is hard to capture in one photo!

2. Euromast
The Euromast is one of the most popular monuments in Rotterdam, with originally 100m in height providing a 360-degree view of the city. The Euromast was built in 1960 to commemorate an international flower and garden exhibition and for some time it was the tallest building in Rotterdam. It was soon overshadowed by surrounding buildings which is when the space tower was added, taking it up to 185m and gaining its former status as the tallest building (a bit too high for me to be honest) in the city. Not only is there an observation deck but also a restaurant at 100 metres where you can eat, drink and enjoy the view. The Euromast is further known to be a place to do extreme sport such as zip lining… 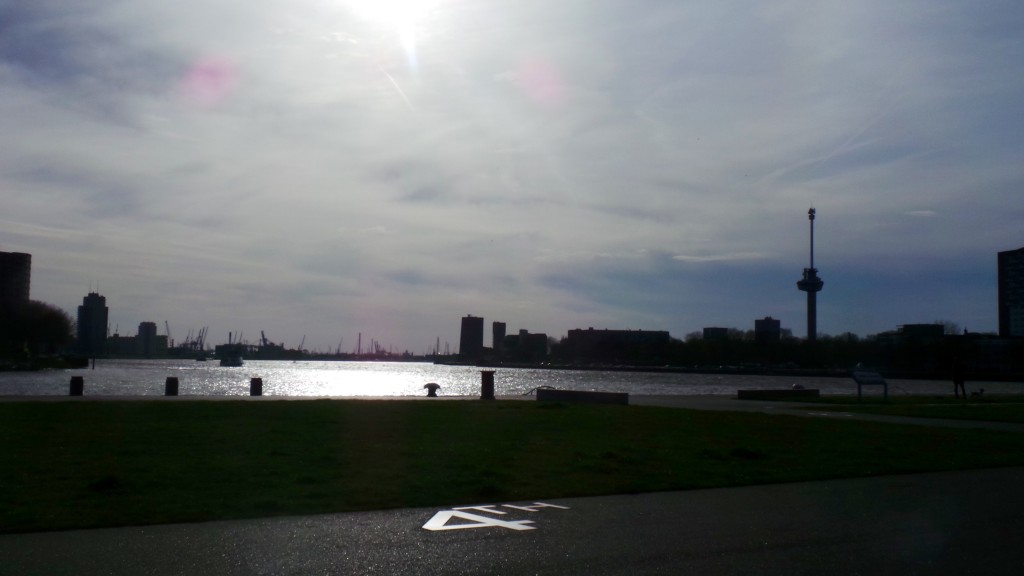 The Euromast can easily be distinguished amongst the Rotterdam Skyline 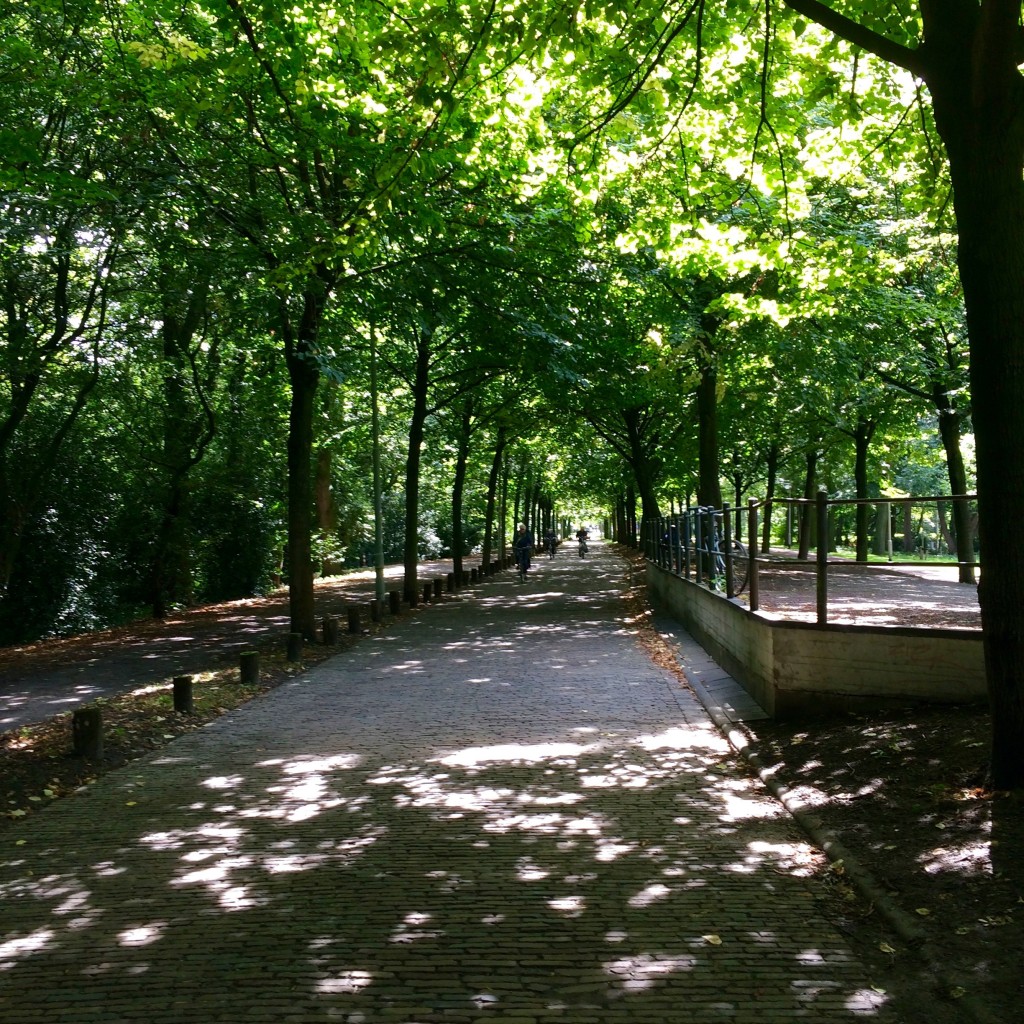 The Euromast is surrounded by Het Park or “The Park”

Going up! Did I mention I am afraid of heights? 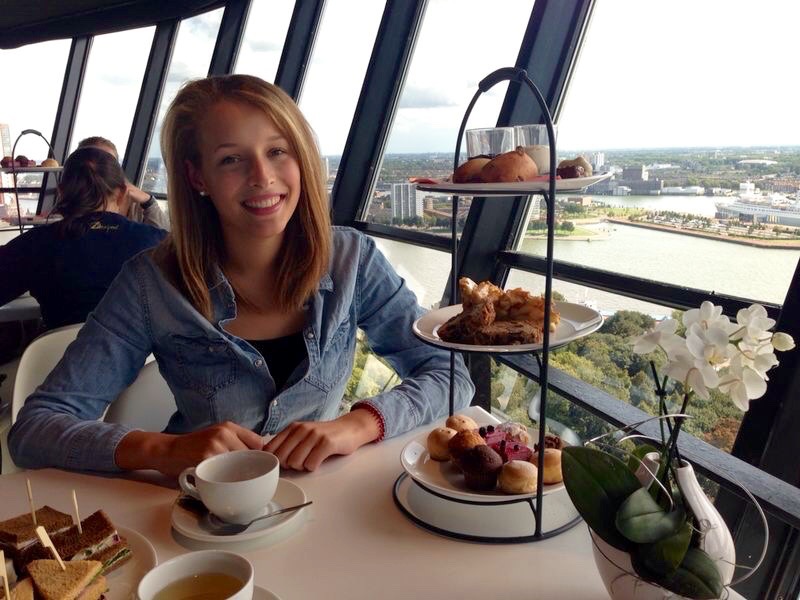 Couldn’t resist having some tea! 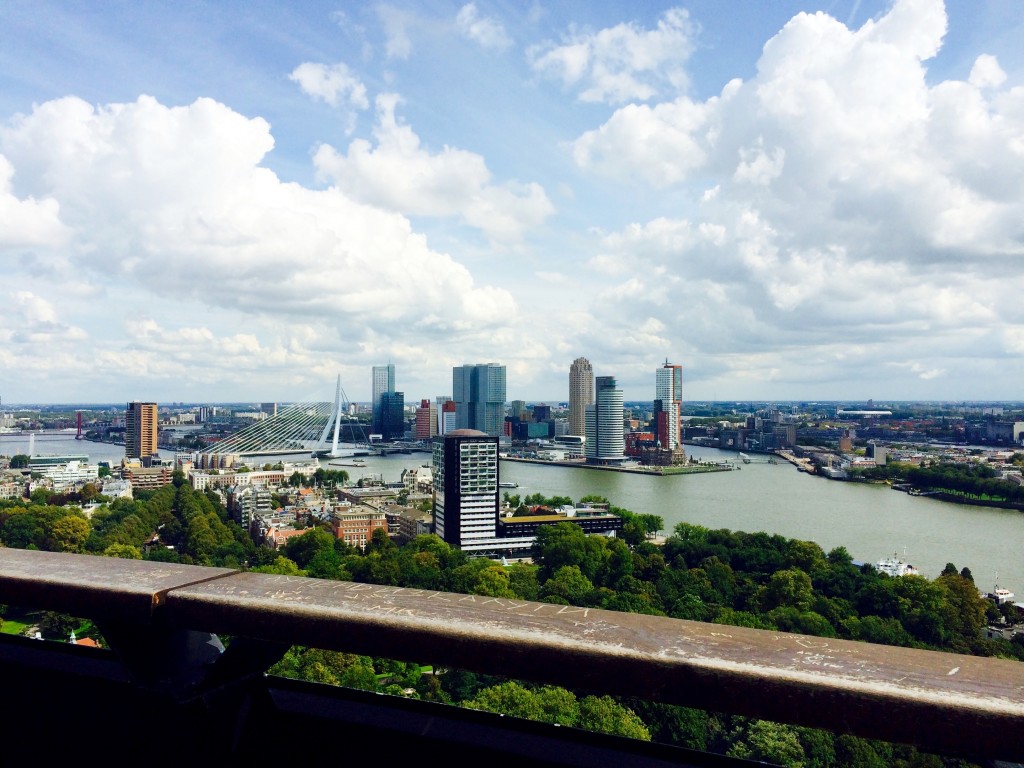 What a view! Totally worth it.

Mostly clouds and my friend but you can also see the Port of Rotterdam.

Another very popular site to visit that I was really intrigued by are the Cubic Houses. There are 38 houses built at a 45-degree angle and all are attached to each other. I never imagined that people actually lived in these houses and curiously went to the TheKijk-Kubus (Museum House). The house was fully furnished and it was quite unexpected. 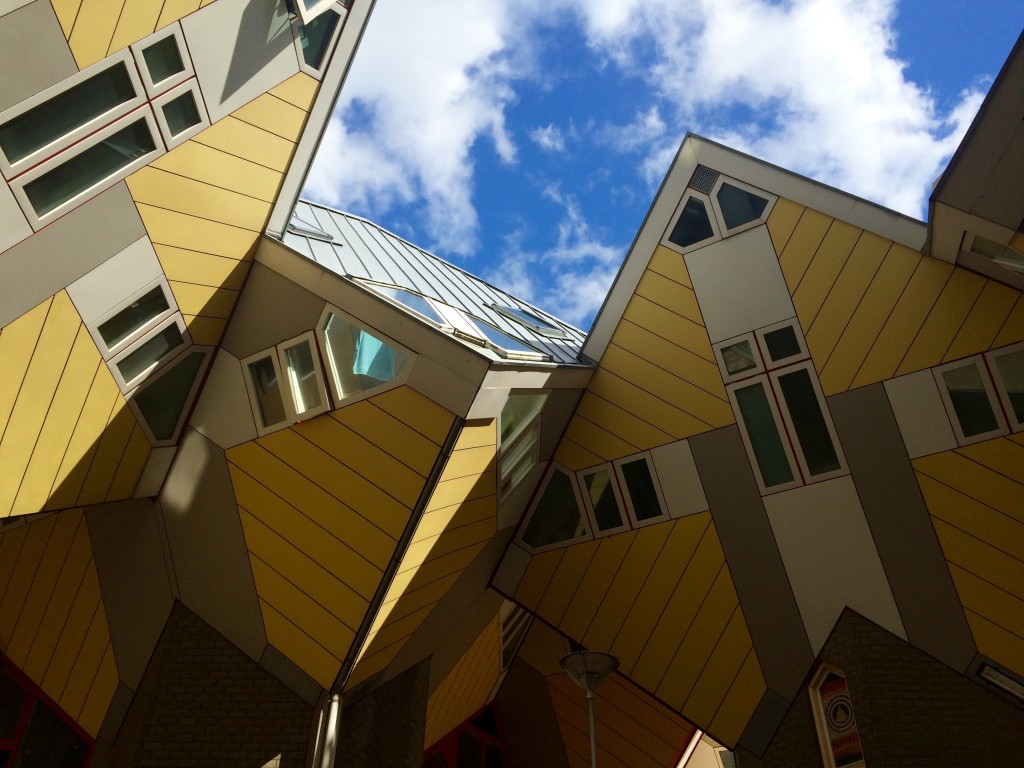 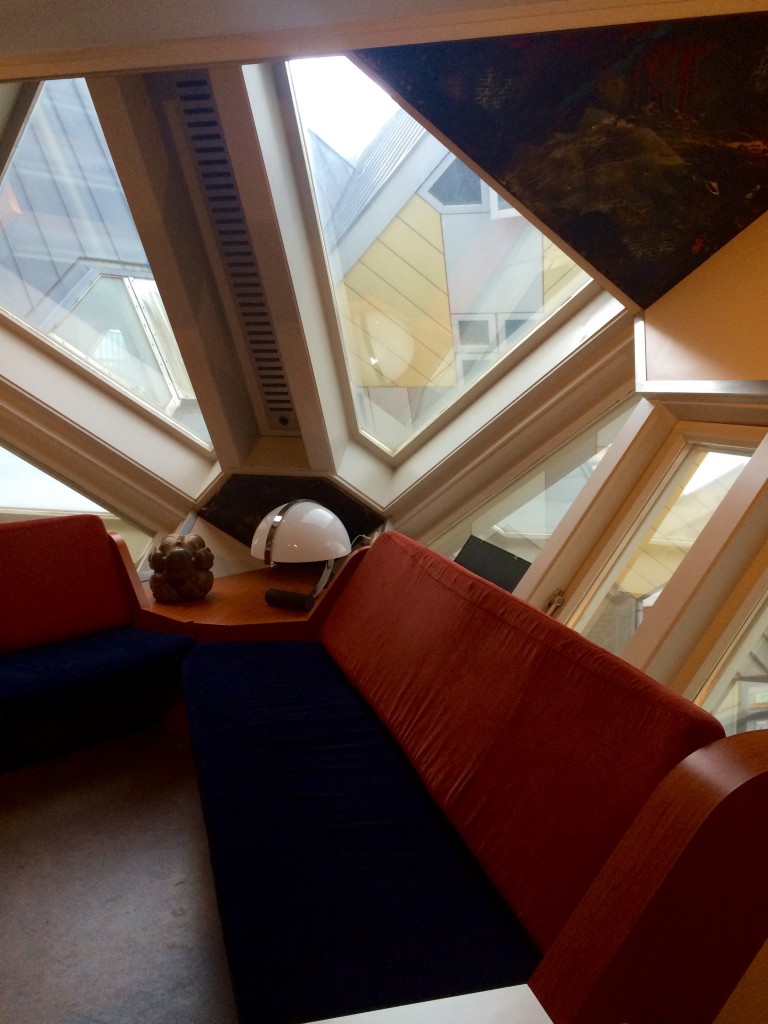 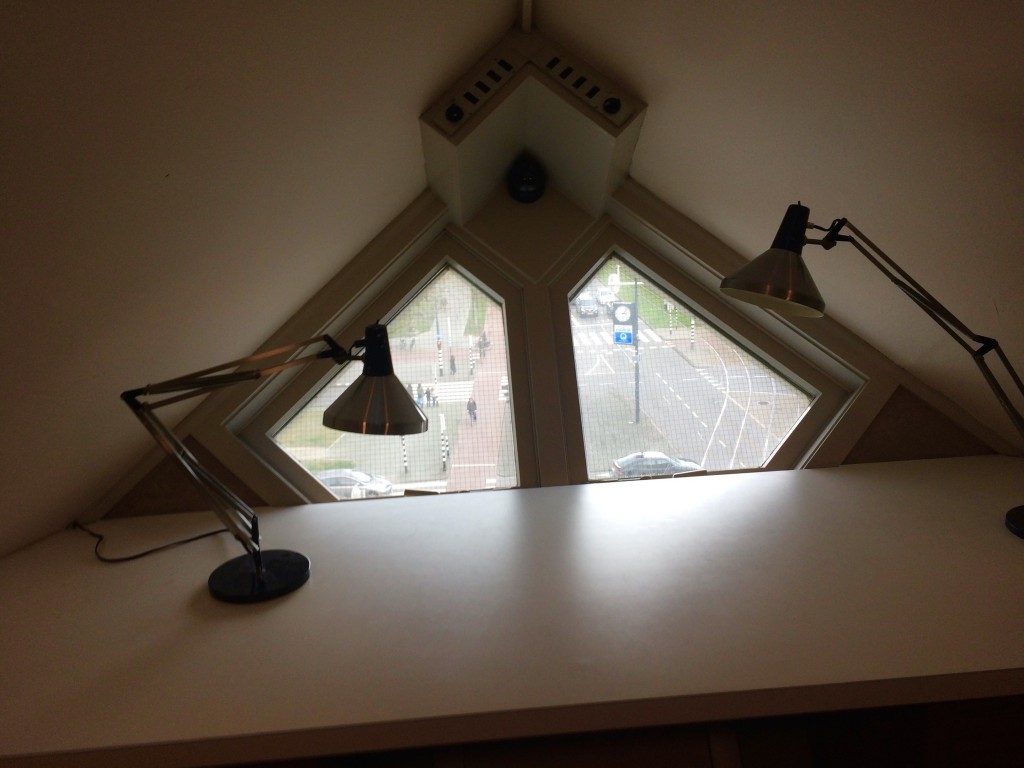 My favourite of all the bridges in Rotterdam is the Erasmus Brug or as they also call it “The Swan”. It was inaugurated in 1996 by Queen Beatrix and connects the north and the south of Rotterdam. Not only is it majestic but like many of the Dutch bridges a section of it rises to let boats through – this never seizes to amaze me. The Erasmus Brug is often seen on television and I was lucky enough to see the Rotterdam Marathon 2015 as runners took part in the event. 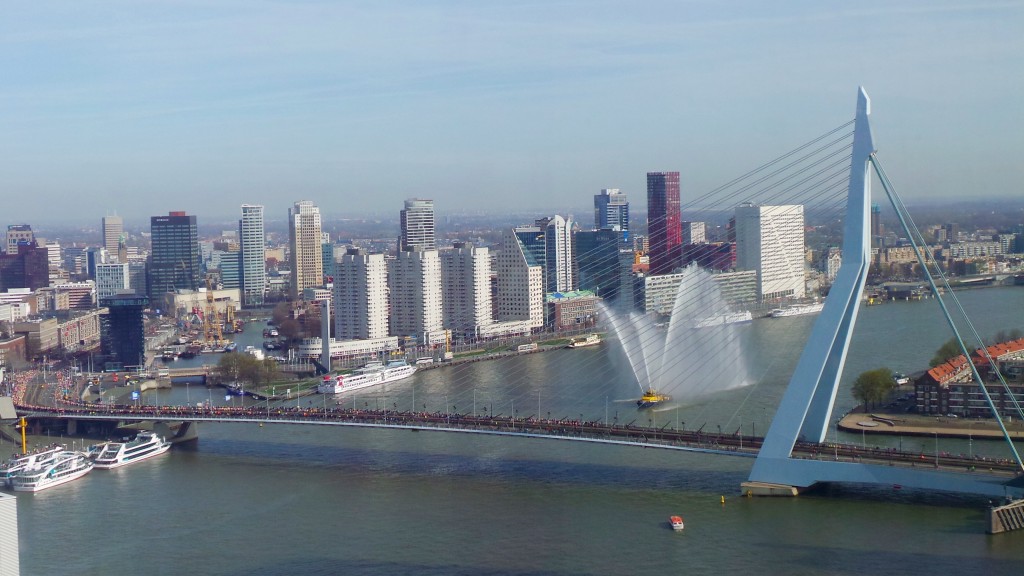 The Rotterdam Marathon at the Erasmus Brug

This is also where fireworks are displayed on New Year and where the ‘Tour De France’ began in 2010. 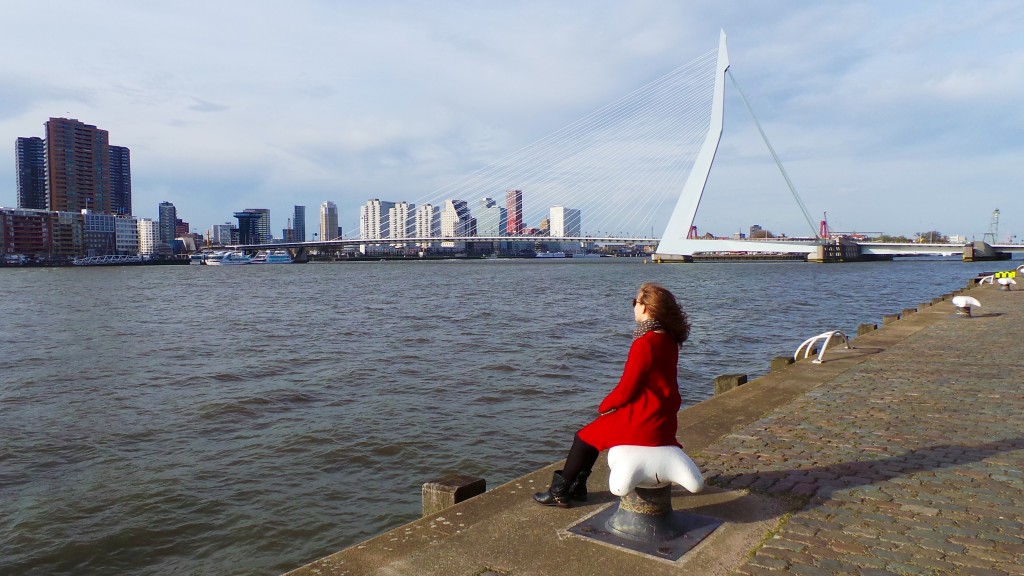 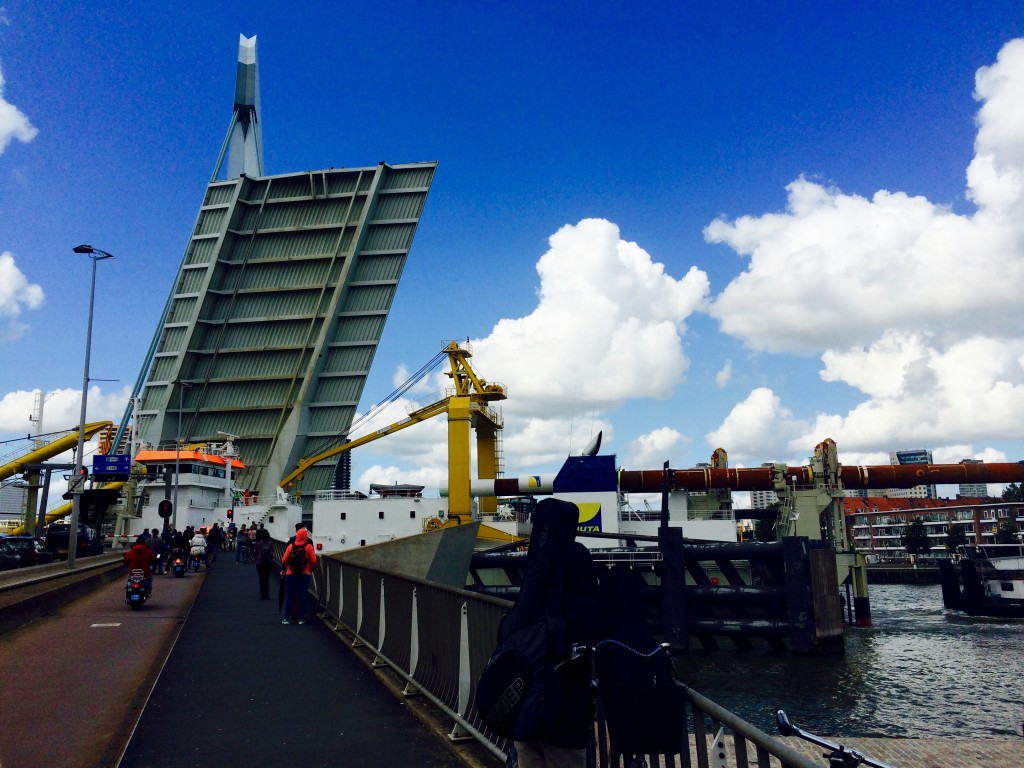 Section of the Erasmus Brug opening to let a boat through

A quick tip! From the Erasmus Brug you can see the KPN office building which looks like its leaning on a pole! 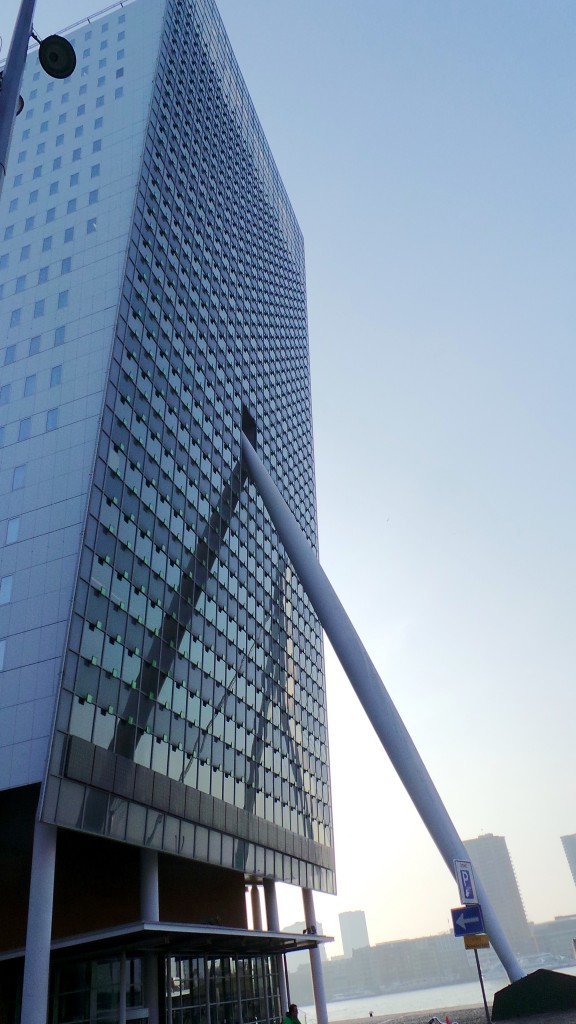 I have no words to describe the size and design of this building! This is my absolute favourite and not only because of what is on the inside. The Markthal or “Market Hall” was inaugurated on the 1st October 2014 by Queen Maxima. Not only is it a food market, it holds 228 apartments, 96 food stands, 20 restaurants and 1200 parking spaces. It is no ordinary place, it is a whole destination. I love this place so much I will dedicate another blog post to give more details on the food market part of it – stay tuned! 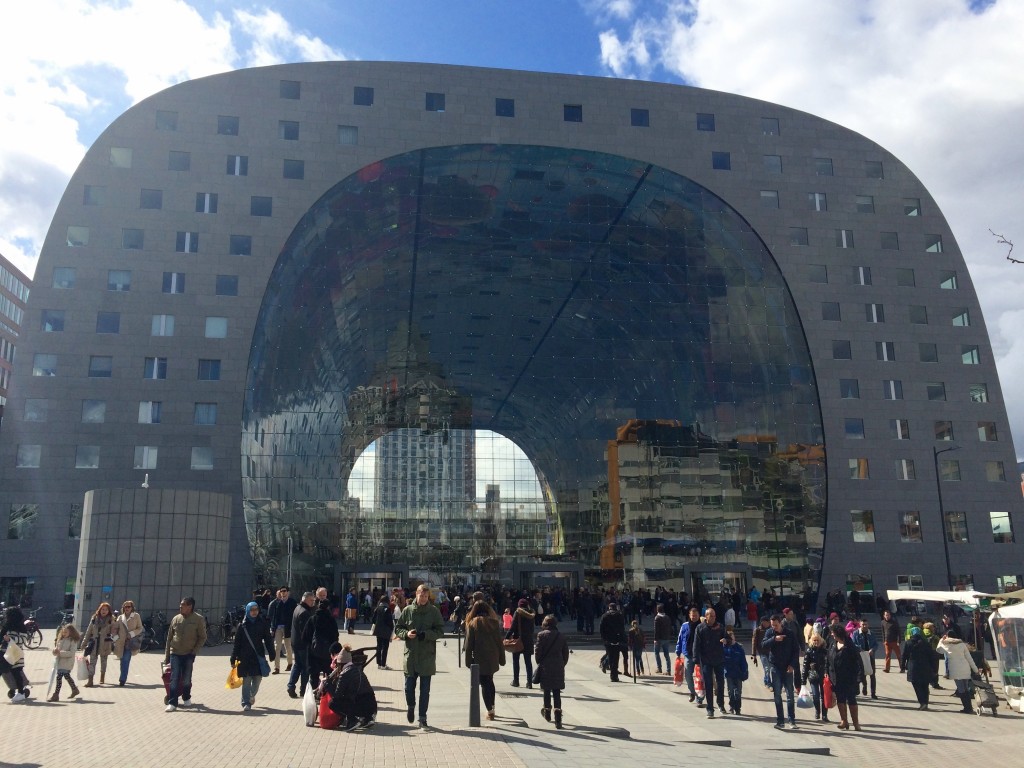 What a spectacular building! 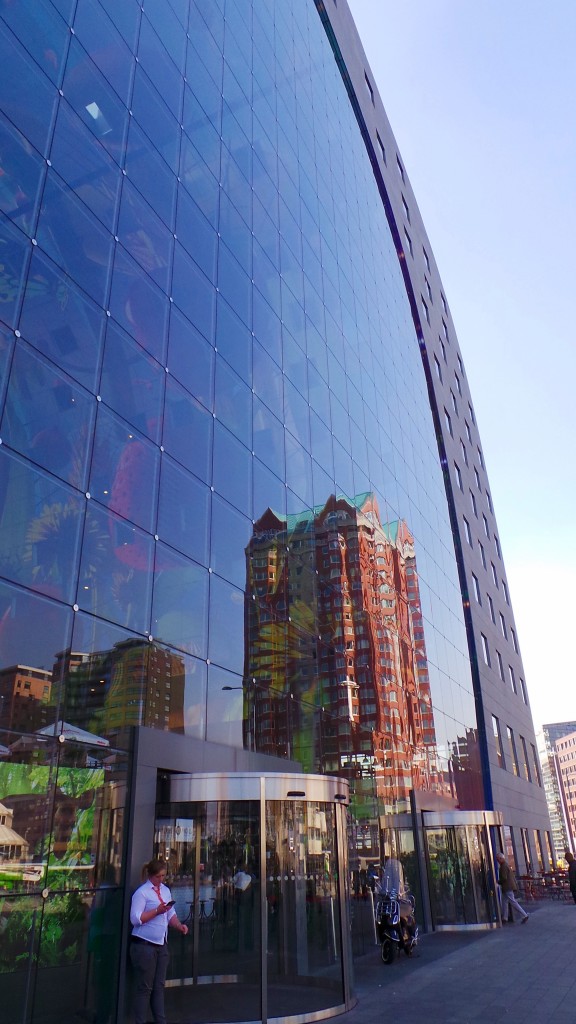 The Rotterdam located on the Wilhelminapier, often known as the Vertical City, was finalised at the end of 2013. The building is made of three towers and is one of the largest buildings in The Netherlands. This building has a café, a hotel, offices and apartments, which gives it grounds for the name “The Vertical City”.

The best place to see it is from the Erasmus Bridge because if you get too close you can hardly capture it in a picture due to its size! 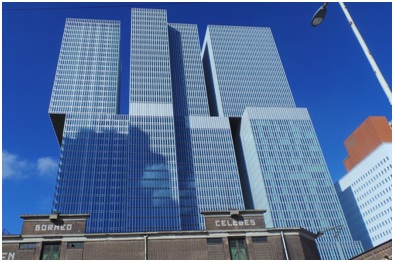 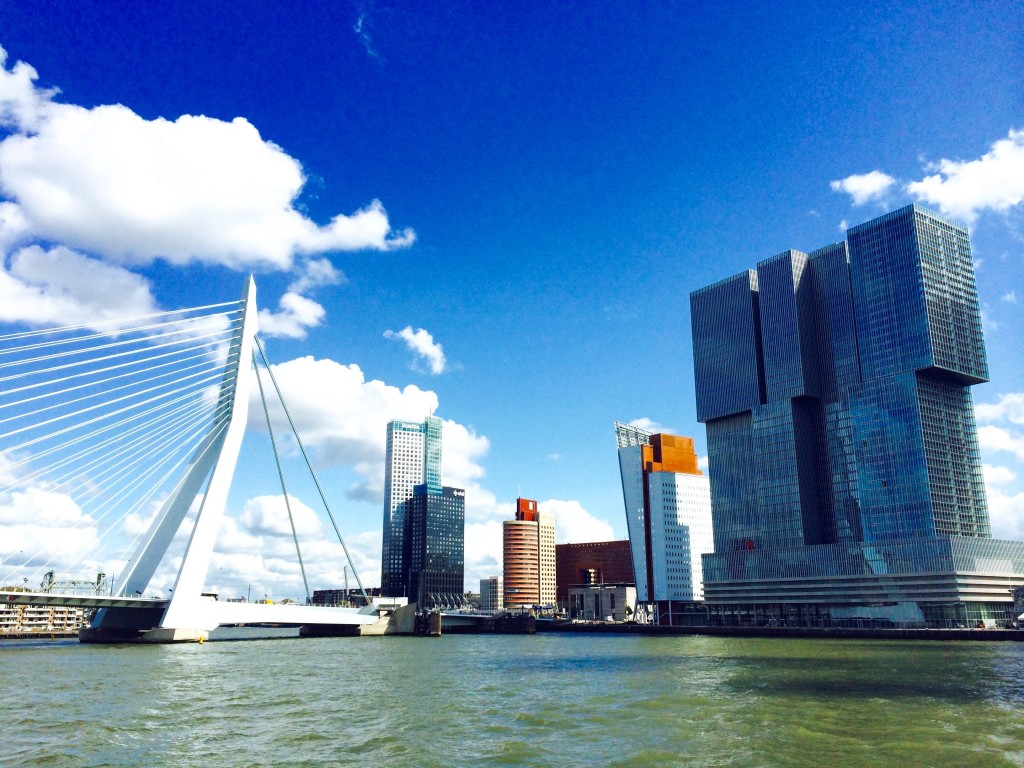 This skyscraper is located in front of the central station and is hard to miss with its 131 metres in height. It is now used for offices, a health studio, apartments and the renowned Manhattan Hotel. With a prime location and the buildings stature, it is worth a visit. 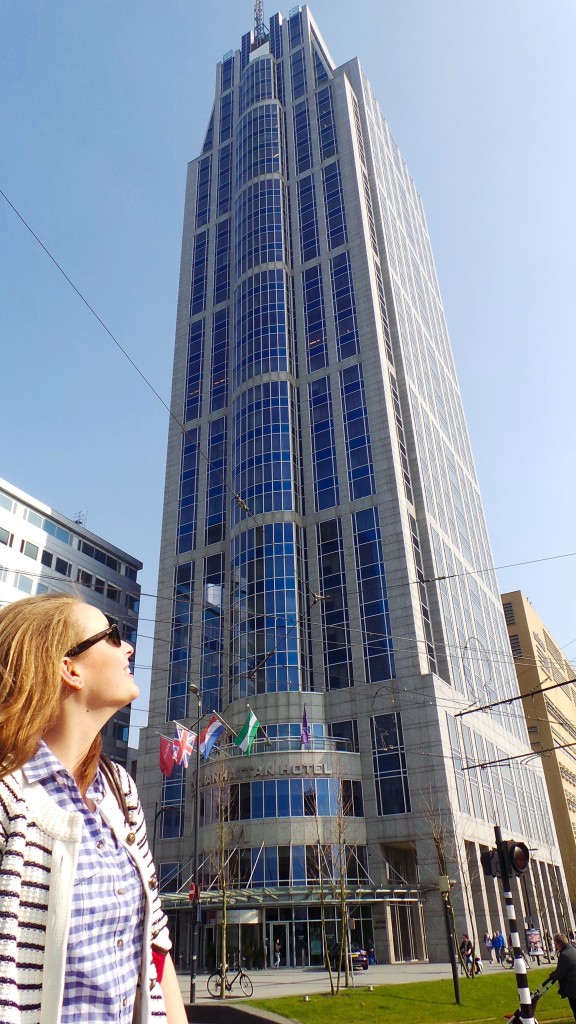 Barely fits in a photo! 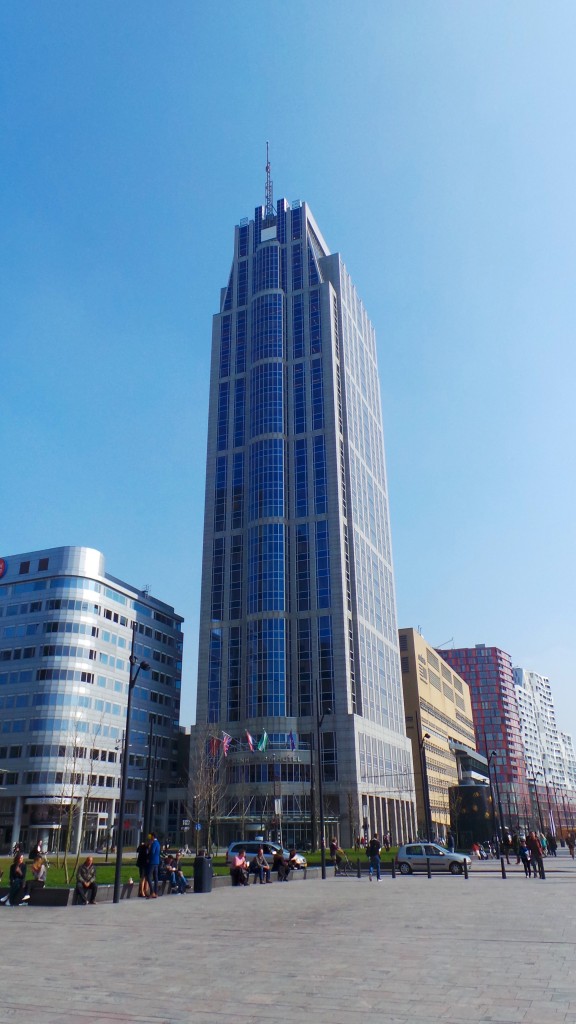 Het Potlood or “The Pencil” is located in between the Markthal and the Cubic Houses. Its shape is different from any other building in the city and is easily recognisable. This building was completed in 1984 and is now used for apartments and the lower levels have shops. 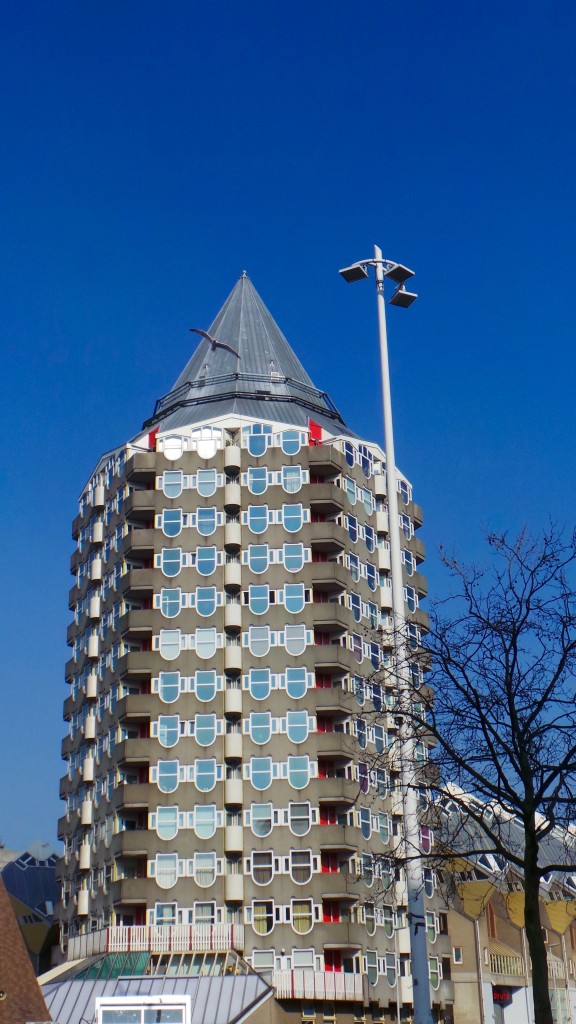 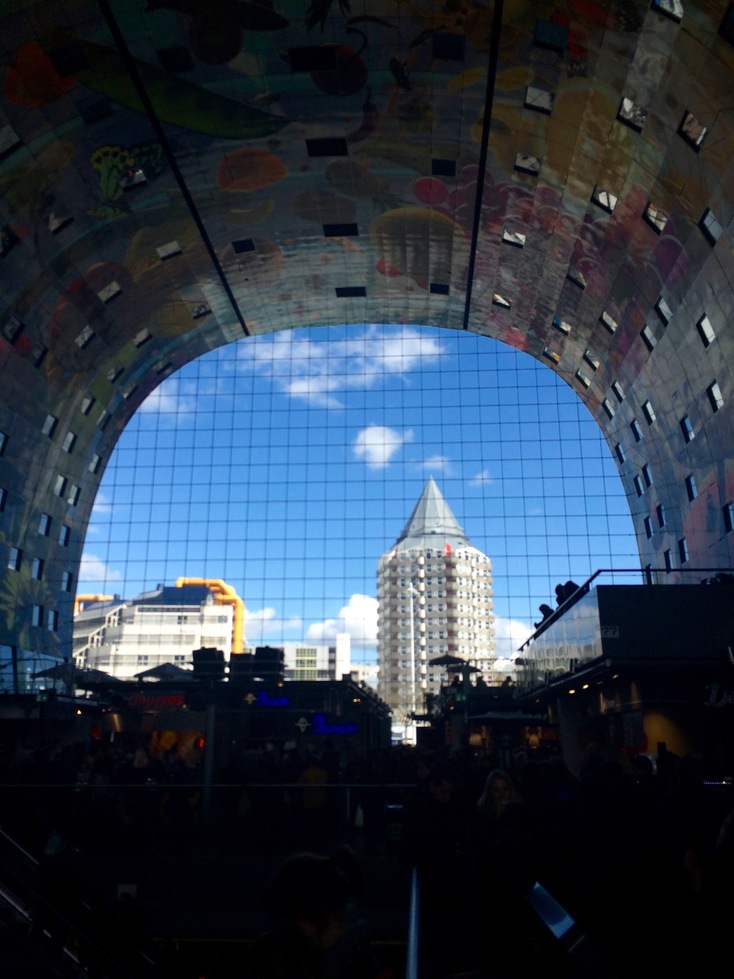 View of Het Potlood from the Markthal

The World Port Centre, located on Wilhelminapier is 124 metres high and this landmark is the head office of the Port Authority of Rotterdam. Did you know that it is the largest port in Europe? The Building, completed in 2000, was designed by a British architect and was one of the first new and ‘modern’ buildings in the area. 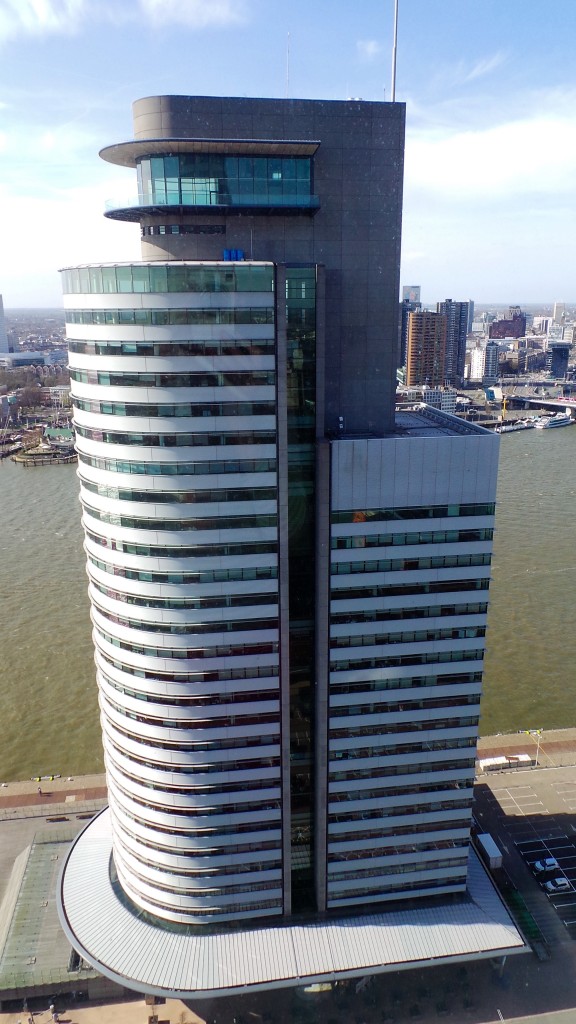 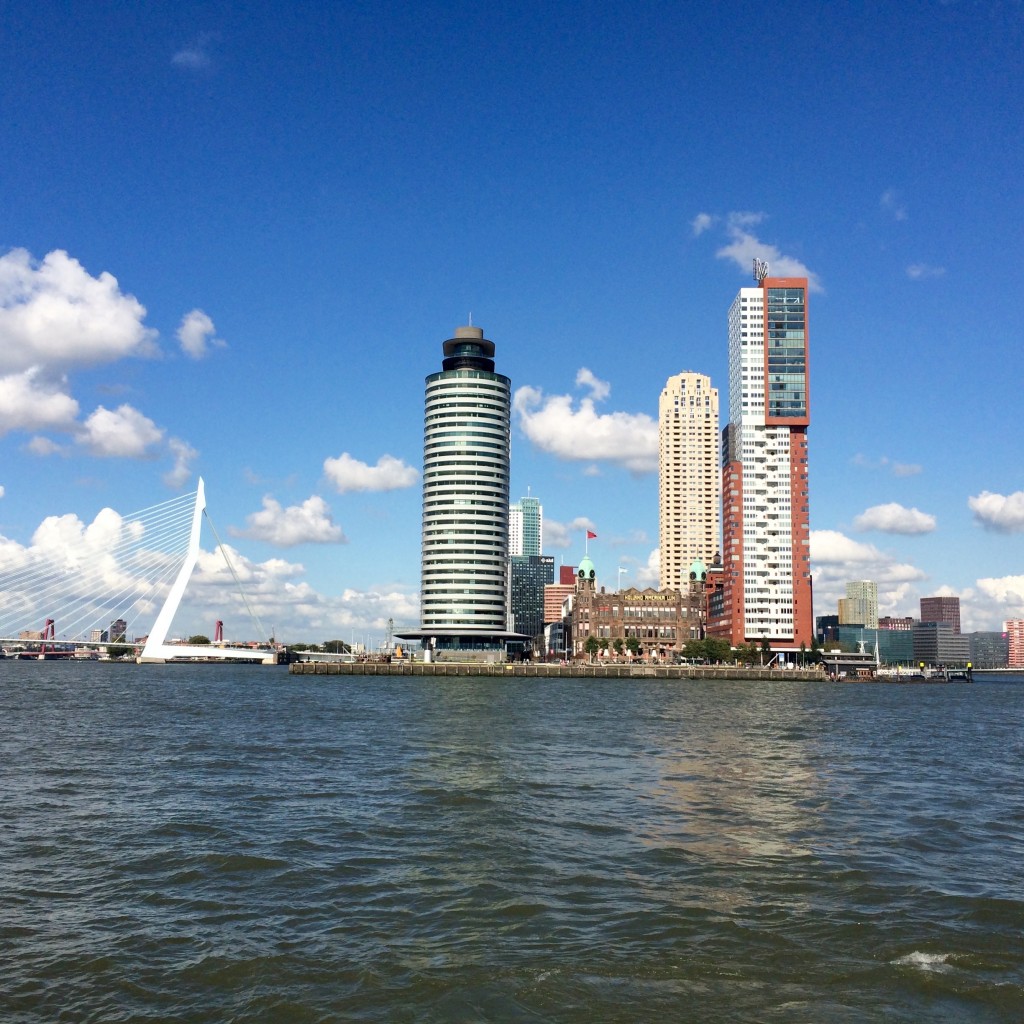 Staduis or “Town Hall” was constructed between 1912 and 1920 and was restored between 2008 and 2010 as it was one of the only buidlings in the centre of Rotterdam to survive the bombings in 1940. 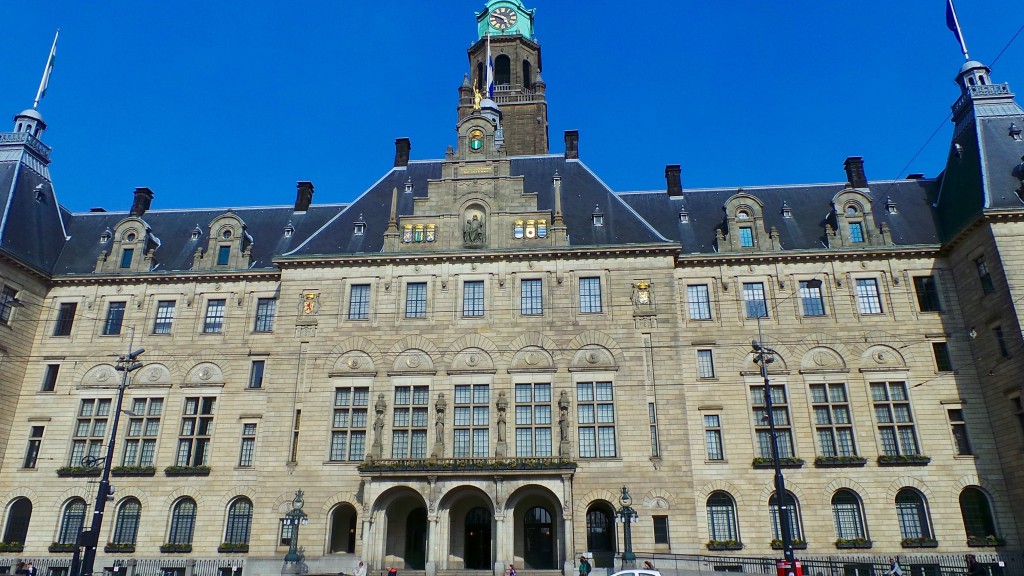 Stadhuis…something so beautiful about it!