After a few weeks of intense studying, everyone needs to be able to let off some steam. My friends and I decided it was time to take a break and clear our minds. Can you think of a better way to do that than a road trip? Craving some sun and pasta, we decided to start our adventure in Milan and end our trip in Cinque Terre before facing reality back at home.

The Duomo in Milan

Our first stop was in Milan (the second biggest city in Italy) and where else would you go but to see the Duomo? It is the heart of the city. Since we arrived near lunchtime we headed over to La Rinascente to do a little window-shopping before lunch. 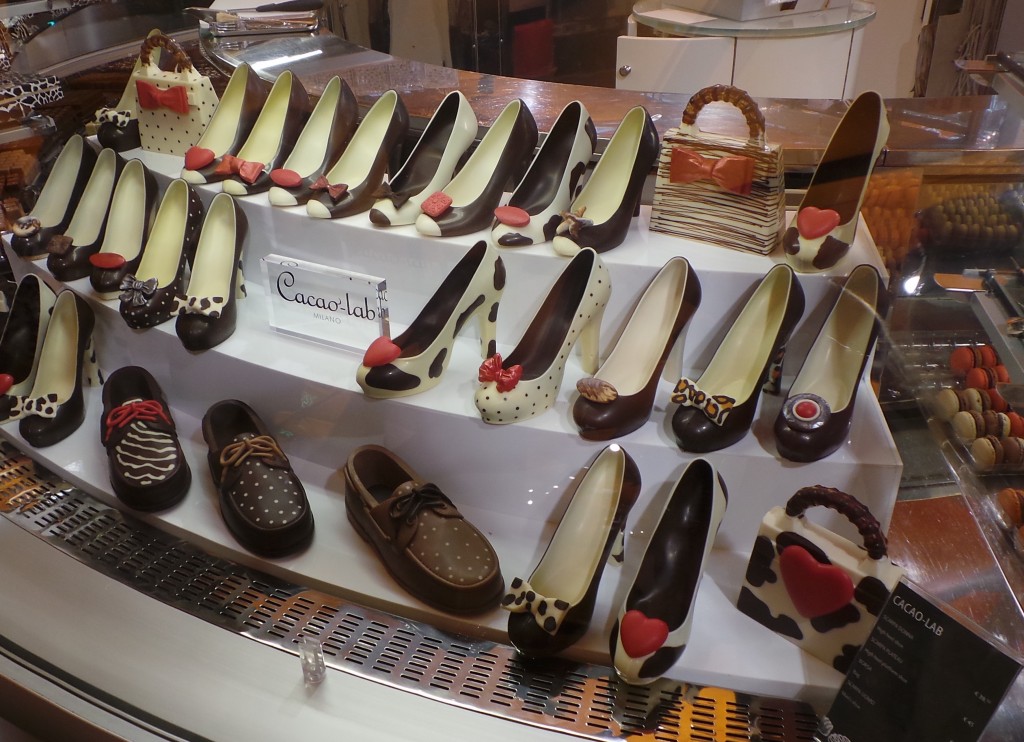 They even had chocolate heels!!

It is a great department store and not too long after we were hungry and had lunch on the rooftop terrace with a view over the Duomo. 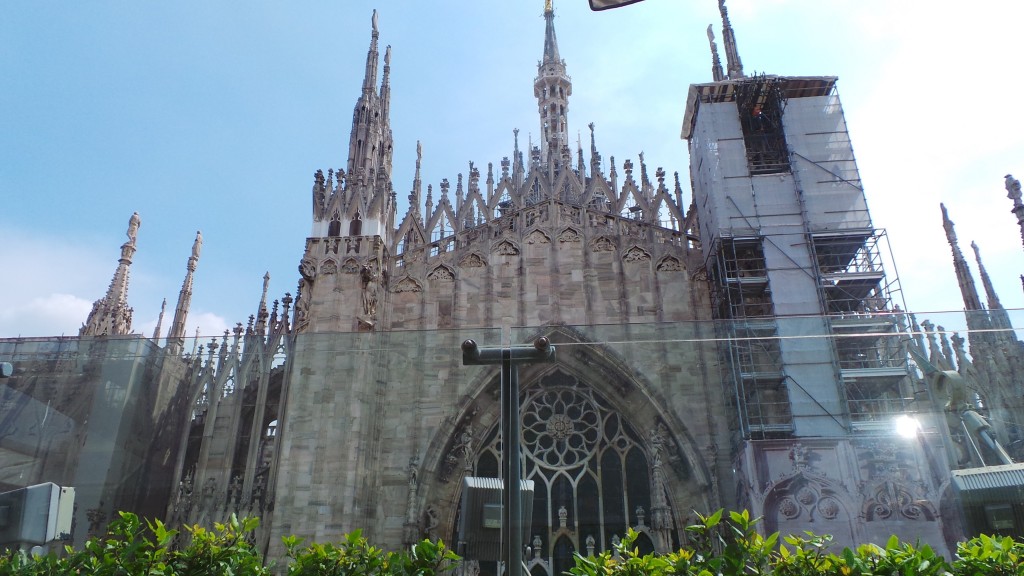 And after a quick walk around we headed back to the car to continue on our journey. 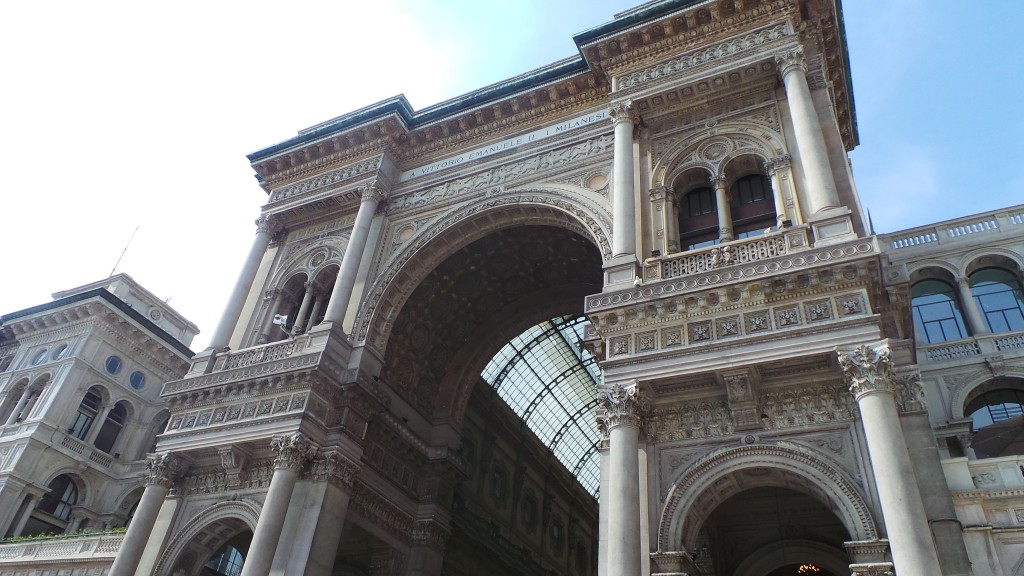 Nearly three hours south of Milan we began to worry because we did not see the beach we so dearly craved. But after several more minutes of vast mountain terrain we saw an opening and found the little city of Viareggio.

Viareggio is part of northern Tuscany, facing the Tyrrhenian sea. Not being able to hold our excitement, we quickly checked in to our hotel and went to explore. What we found was exactly what we were dreaming of.

In that moment, I don’t think I could have been happier

Our hotel faced the sea and the first thing we did was head over to put our feet in the sand! 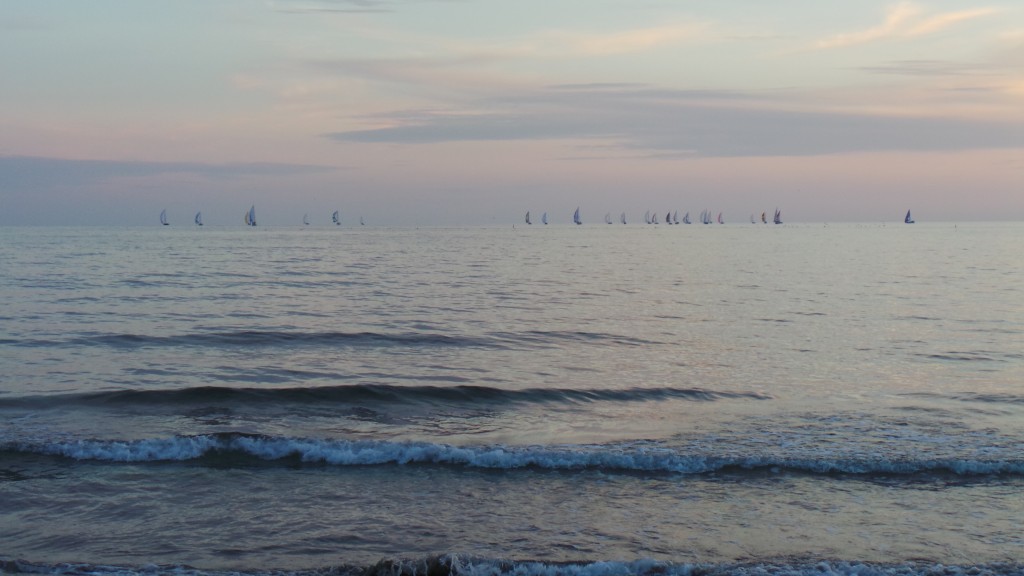 We sat on the sand and enjoyed our first day of peace as we watched the sunset. 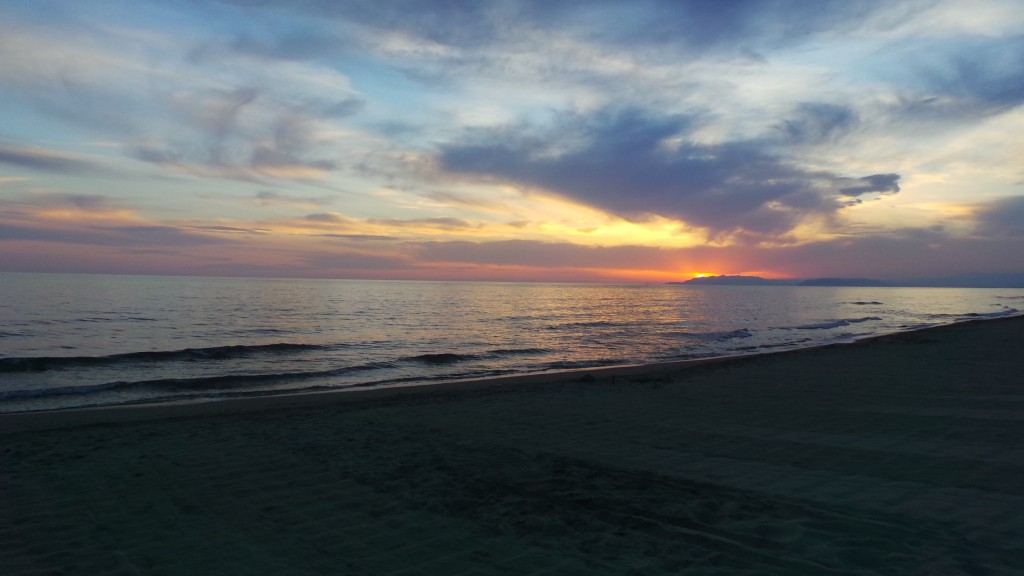 Later that evening we walked along the boulevard and stopped at an Italian restaurant to enjoy one of the most delicious meals I have ever had. 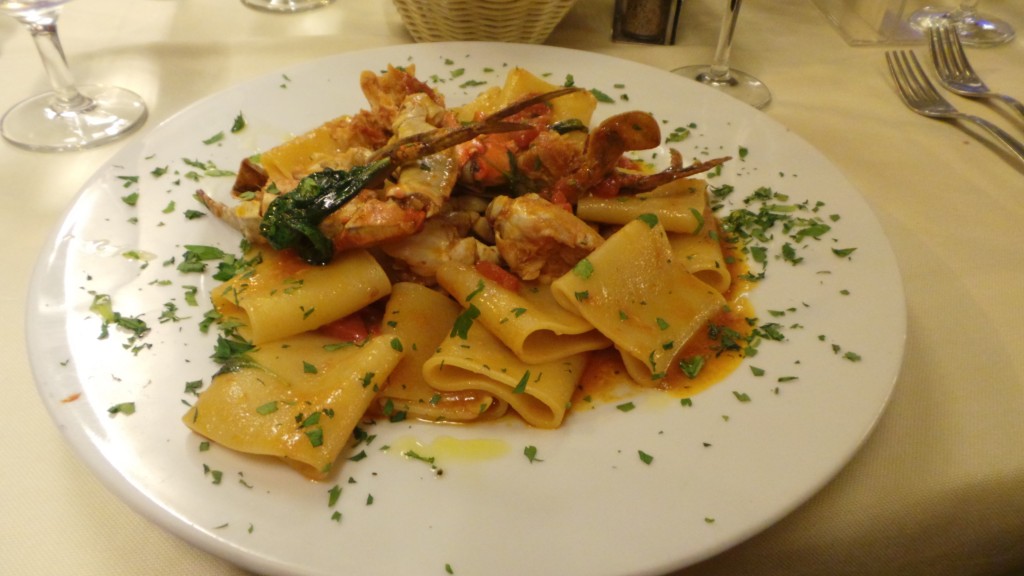 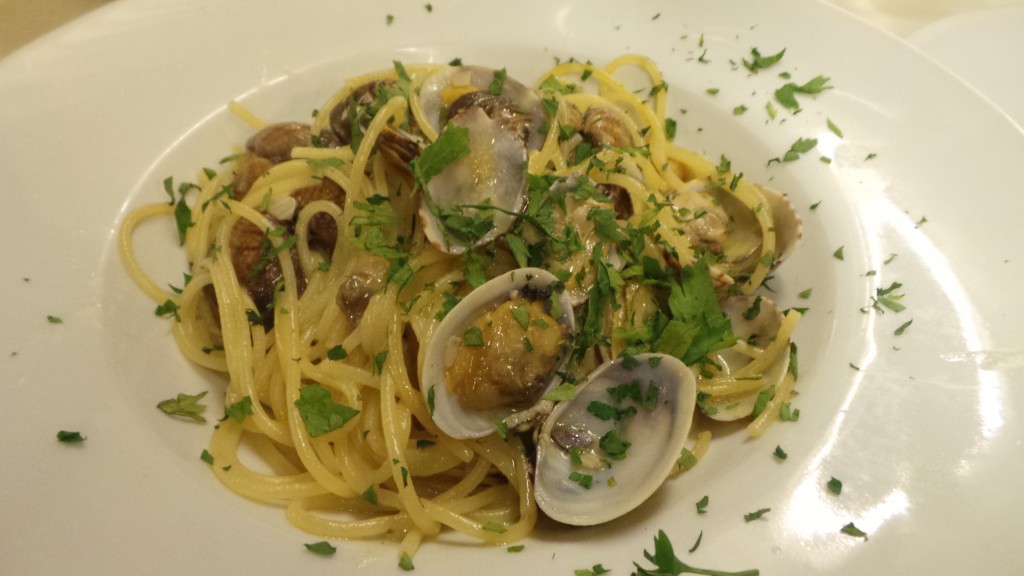 Spaghetti a la Vongole (my favorite) 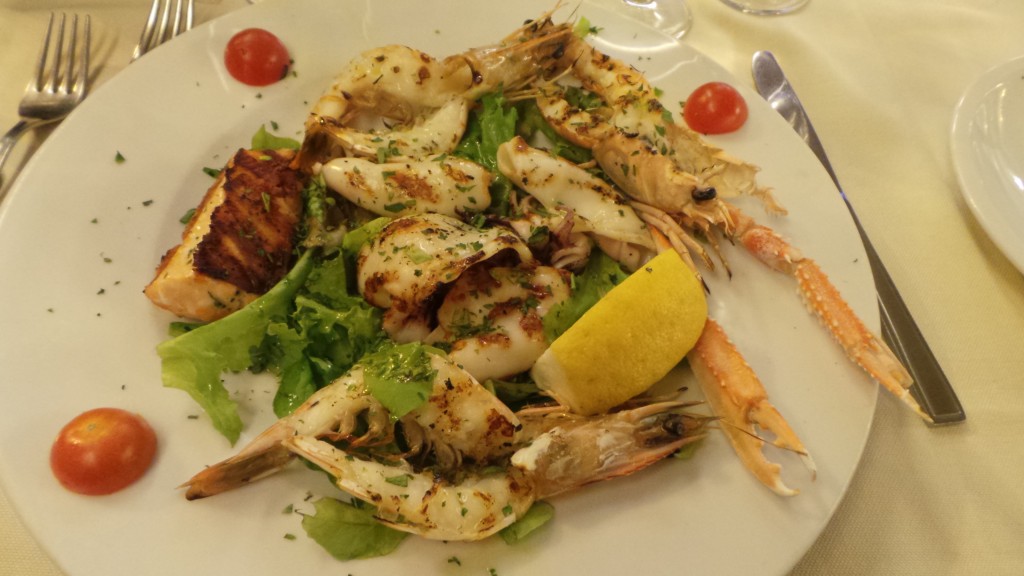 After our meal and white we were surprised at the great nightlife. If you go to Viareggio, I recommend heading north towards the nightclub Twiga as there are many bars!

After a late breakfast we drove approximately 45 minutes to the city of Pisa. Pisa is of course famous for the Leaning Tower of Pisa! The Leaning Tower is a bell tower that is tilted. 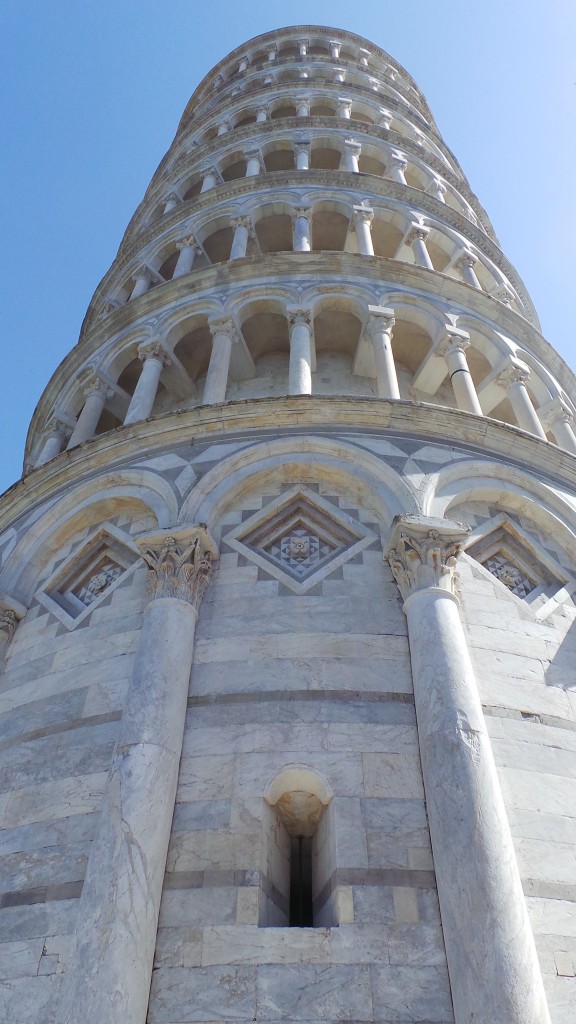 The Leaning tower of Pisa is 55.8 meters high (Although you can’t yet see its tilt)

I have always wanted to see the tower, which I imagined to be much bigger than it actually was. A bit of background on the tower: it is located in the Piazza del Duomo and is the third oldest structure in the square. It was not intentionally built to be tilted but during the construction there was a problem with the foundation, which was softer on one side, and the tower kept tilting until it eventually stabilized.

Everyone must take his or her tourist picture with the tower. 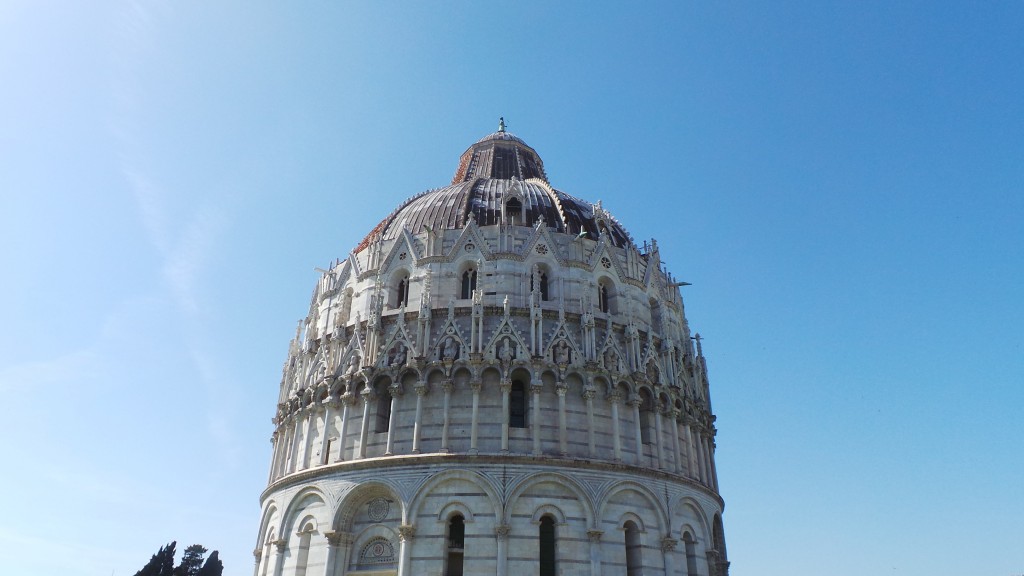 The Pisa Bapistry and the perfectly clear blue sky

The baptistry is the largest one in Italy and is a Roman Catholic building constructed in 1152.

The heart of the Piazza del Duomo is the Pisa Cathedral, also known as the Primatial. The cathedral is medieval and titled to Santa Maria Asunta (St. Mary of the Assumption) and began its construction in 1064. Inside the cathedral you can find the Pisa Griffin (a mystical creature) which is a large bronze sculpture, it has been there since the Middle Ages though it is of Islamic origin. The cathedral is also the location of several tombs including that of Pope Gregory VIII. 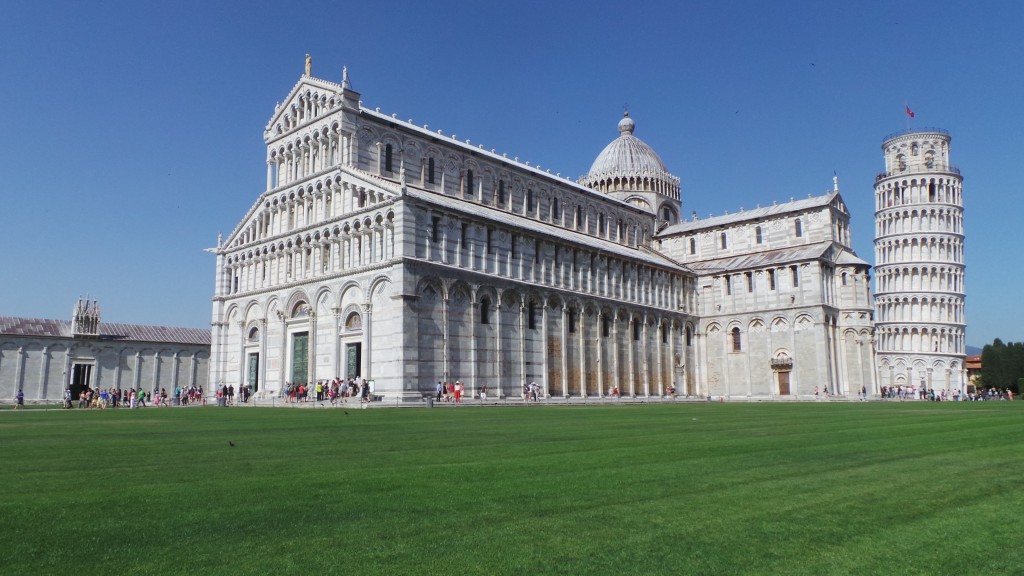 The Pisa Cathedral and the Leaning tower of Pisa

After a long day of exploring we went back to Viareggio for another delicious meal and an early night. 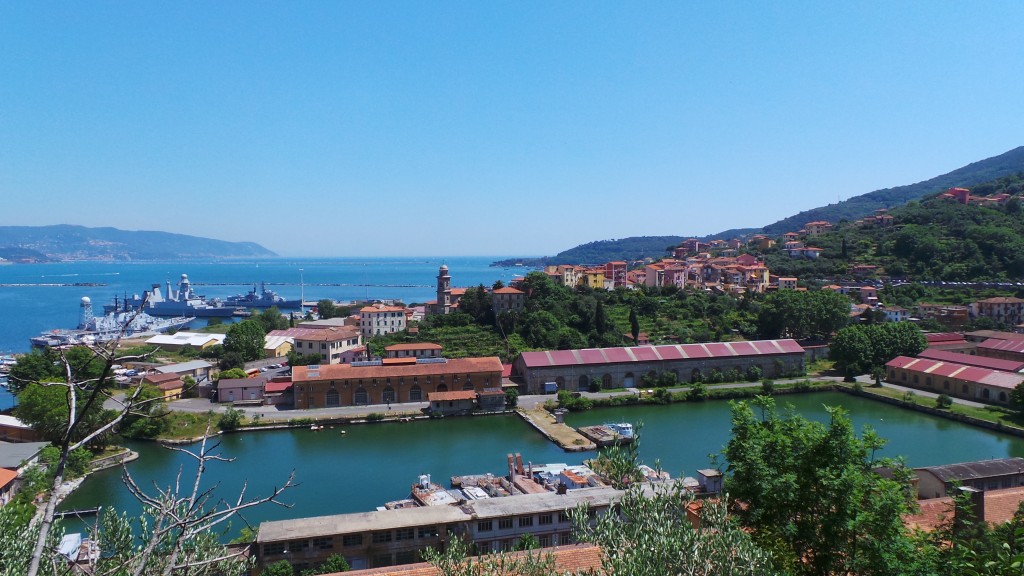 The beautiful scenery on the drive from Viareggio to Cinque Terre

On our final day we drove approximately an hour northwards towards Cinque Terre. Cinque Terre or “Five Lands” is comprised of five old seaside villages: Monterosso al Mare, Vernazza, Corniglia, Manarola and Riomaggiore. All five villages are classed as UNESCO World Heritage Sites. This is the perfect destination for a honeymoon or for people looking for some tranquility, good food and the sea.

A very popular way to visit the towns is to walk along the walking trails however as we did not have unlimited time we drove; however we saw many tourists hiking. Unfortunately something happened to my camera and I was only able to access pictures from our final stop: Monterosso al Mare. 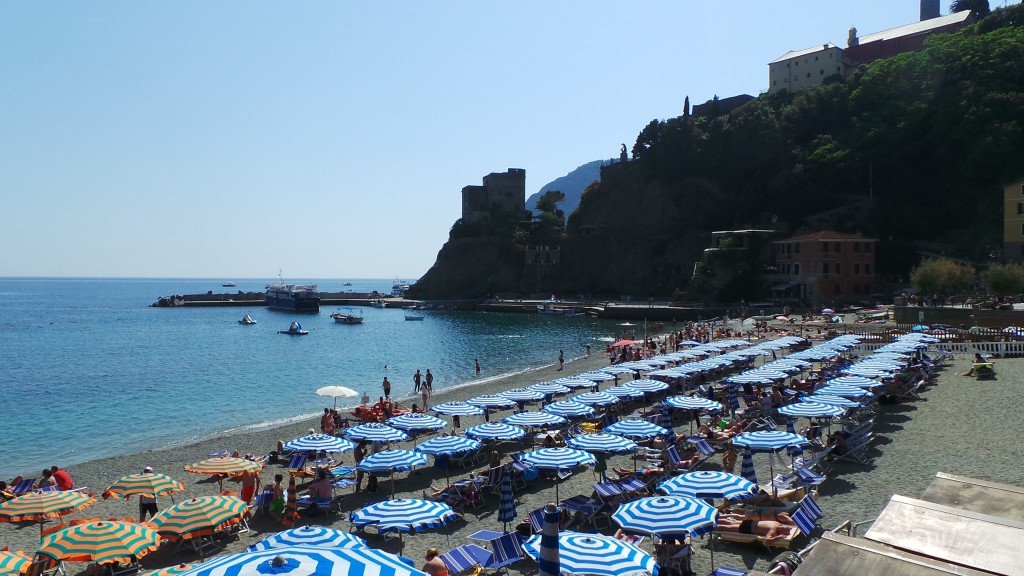 Monterroso al Mare is located in a small gulf in the province of La Spezia (northern Italy).

Once again we arrived around lunchtime and enjoyed our last meal in Italy. 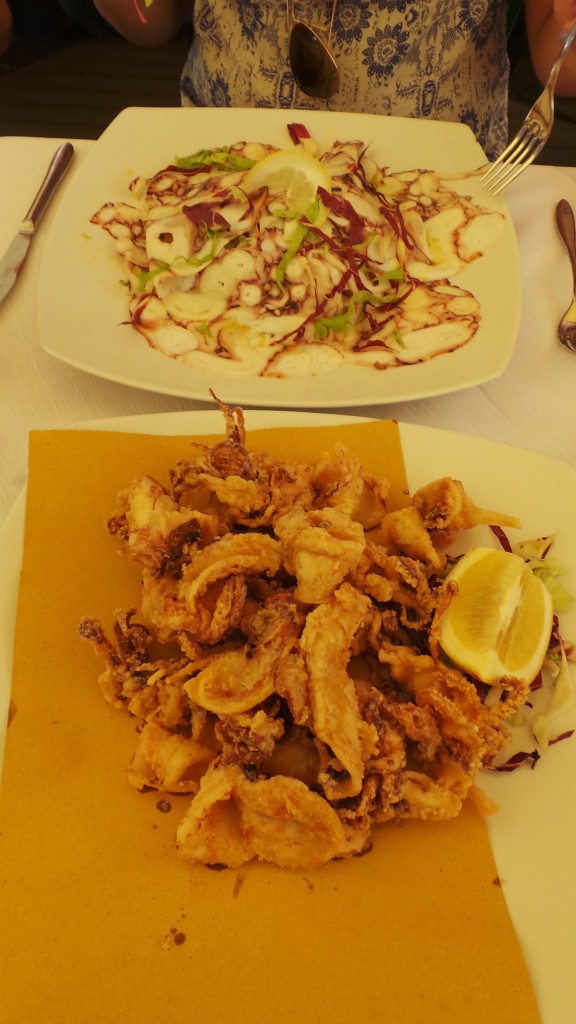 After lunch we walked around the scenic village and did a bit of shopping and obviously… ate some gelato. 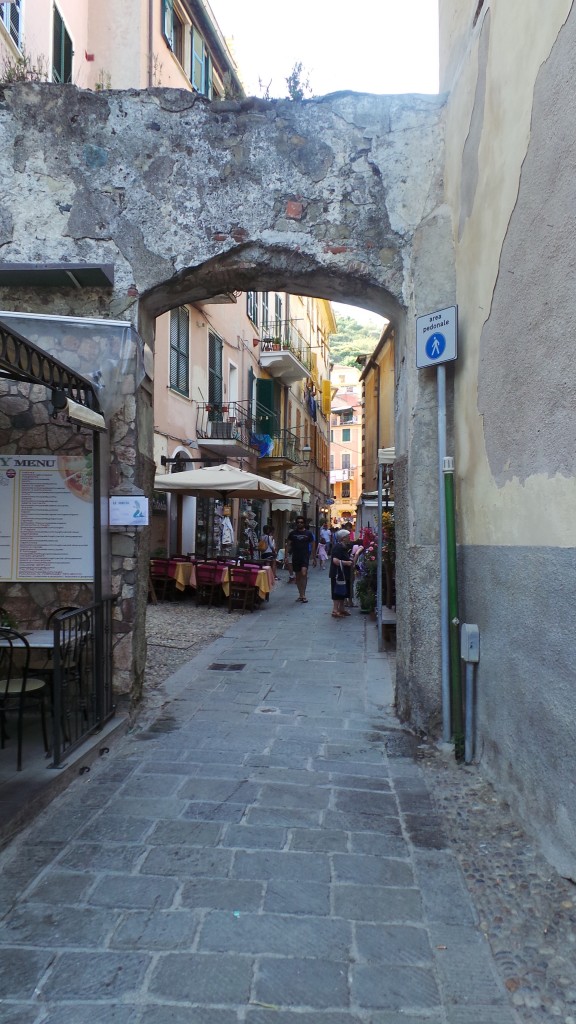 It seemed like since we began our trip on Friday morning we only blinked, and it became Sunday afternoon and it was time for our weekend road trip to end.

Are you planning to visit Italy? Book Luxury hotels in Milan Italy.