Unfortunately summer is coming to an end and this will be my last post about Panama. When I am asked where I am from and I state Panama I usually receive the same response: “Oh, where the Panama Canal is!” I tend to visit the locks every time I visit Panama and this year I also visited the expansion, an activity I highly recommend.

The Gatun Locks at the Panama Canal in Colon

First let me give you some brief history and information about the Canal. The Panama Canal is 80 km long and connects the Pacific to the Atlantic Ocean.  The building of the Canal began with the French in 1880 but due to financial troubles and tropical diseases such as malaria and yellow fever, they stopped. In 1901 Panama, in accordance to the Torrijos-Carter agreement with the United States, handed over the project to the US. Building the Canal was one of the toughest engineering projects ever undertaken, with around 40,000 people working on it originating from approximately 50 different countries. They also took over the Canal Zone that eventually creating tension between the countries. The United States managed the Canal and paid the Panamanian Government a fixed amount (almost insignificant in comparison to its revenues) every year until December 31st 1999, when the Panama Canal Authority (ACP) and the Panamanian people took over the management and control.

View of the Panama Canal and Miraflores Locks from Cerro Ancon

Now that you know a bit more about its history, how exactly does the Canal work? The Canal is a “shortcut” from the Atlantic (Caribbean Sea) to the Pacific Ocean through the Isthmus of Panama. In 2010 the millionth ship crossed the Canal since its opening in 1914. It is crucial to many countries throughout the world that depend on it to save time (not having to go around South America) and saving costs.

The Canal works by using locks that act as water elevators and takes ships from sea then above the isthmus and lowers them again on the other side. There are 3 locks; Miraflores (located the closest to Panama City), Pedro Miguel and Gatun (near Colon).

I usually visit Miraflores but this time I went to the Gatun Locks in the province of Colon (on the Caribbean side), which is located close to the expansion. 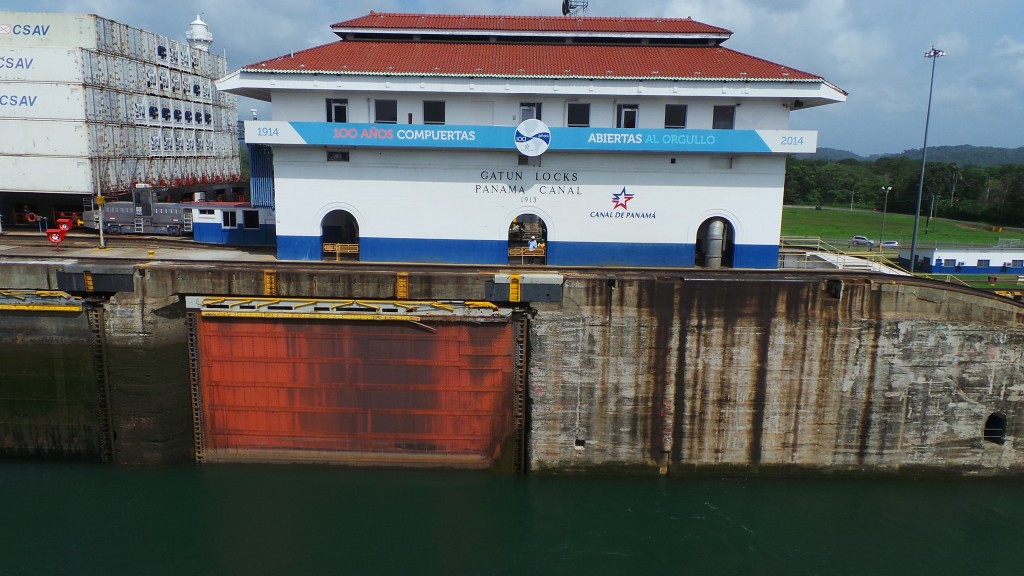 Gatun Locks at the Panama Canal

I arrived at the Gatun locks around midday and was lucky to be able to see a ship passing through. 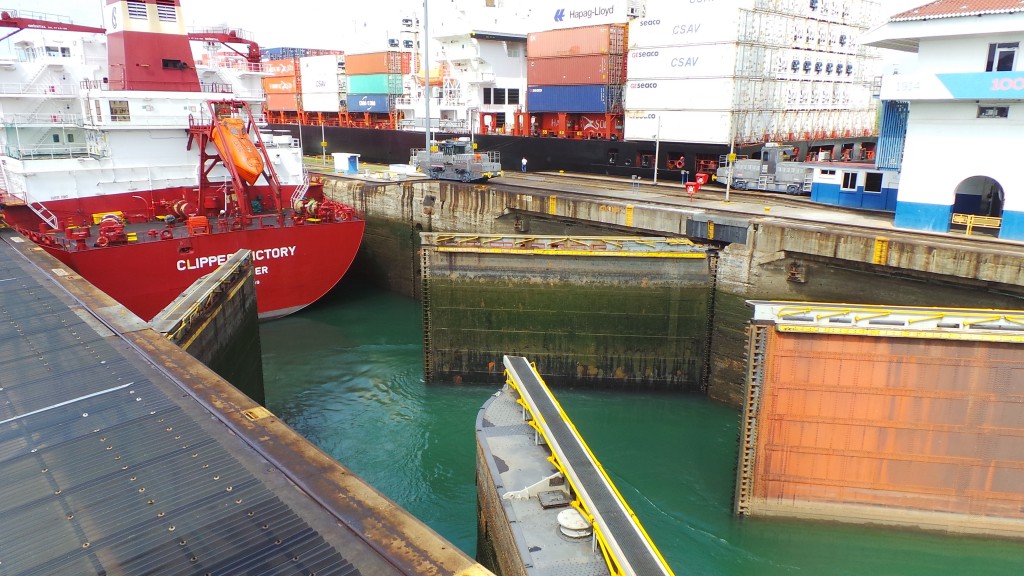 After the ship passes the locks, the locks close (as you can see in the picture above) and then the water level (using gravity) decreases on the ship’s side to lower it to sea level. The water being used in the Canal comes from the artificial Gatun Lake that is located 26 meters above sea level. At the time that it was created (in 1906) it was the largest man-made lake in the world. 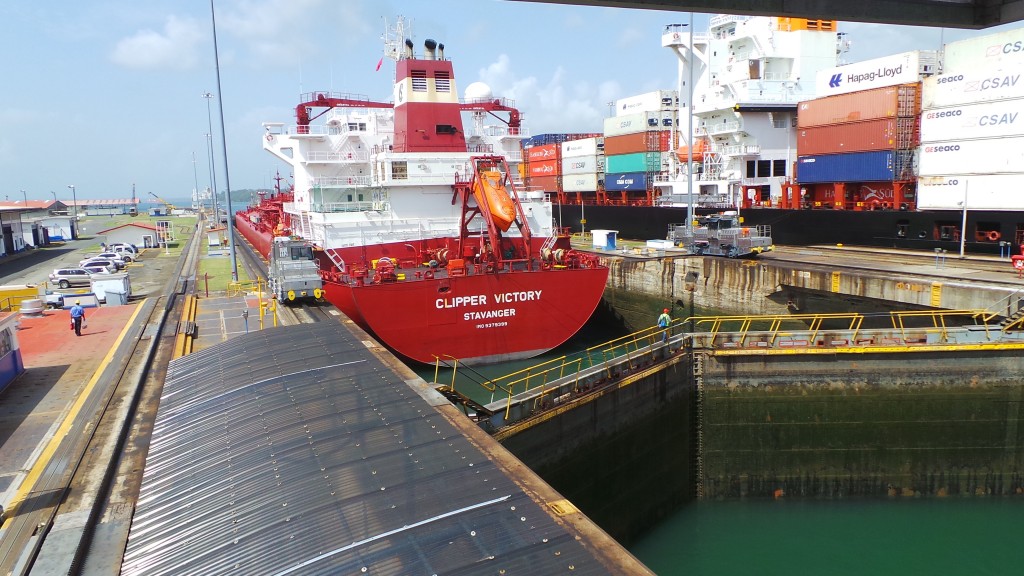 Ship Passing through Gatun Locks at the Panama Canal

As you can see on the image above, the ship is pulled forward by synchronized carts until it reaches the other side where it is released. The journey from one side to the other of the Panama Canal can take between 8 to 10 hours.

Currently the Panama Canal transports approximately 14,000 ships a year, forming a part of 144 trade routes connecting 160 countries and 1,700 ports around the world. The Panama Canal has a dedicated work force of over 10,000 people. 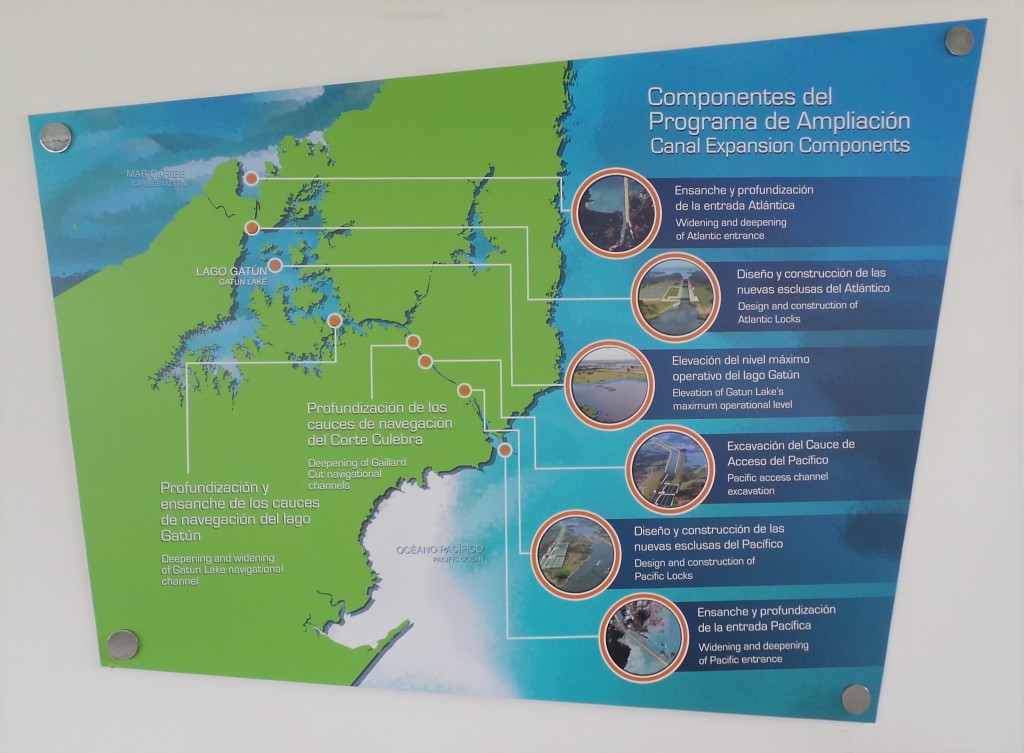 To learn more about the expansion of the Canal that generates a big portion of Panama’s income, I visited the viewing point of the Expansion that is open to visitors. When you arrive on the left you can see a restaurant in the background with information about the Canal leading to it. The restaurant is managed by Hotel El Panama and I recommend it for lunch, as there are not many alternatives with such a view anywhere nearby! 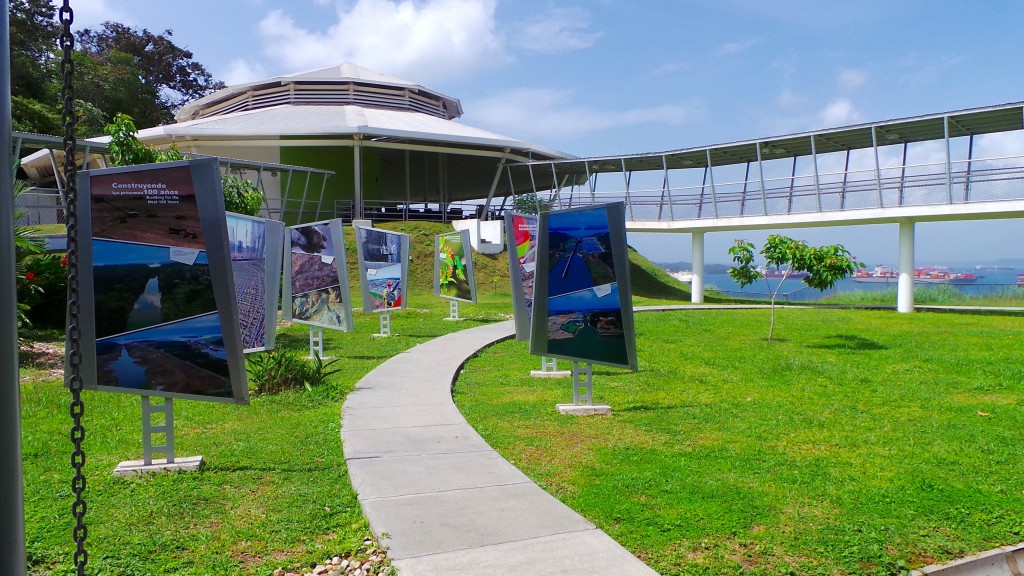 It has a beautiful view and you cannot even imagine how the fresh breeze feels on such a sunny day! This is an ideal destination for all ages; there are facilities for families with young children such as picnic tables and playgrounds. They also have a small kiosk selling snacks and drinks. 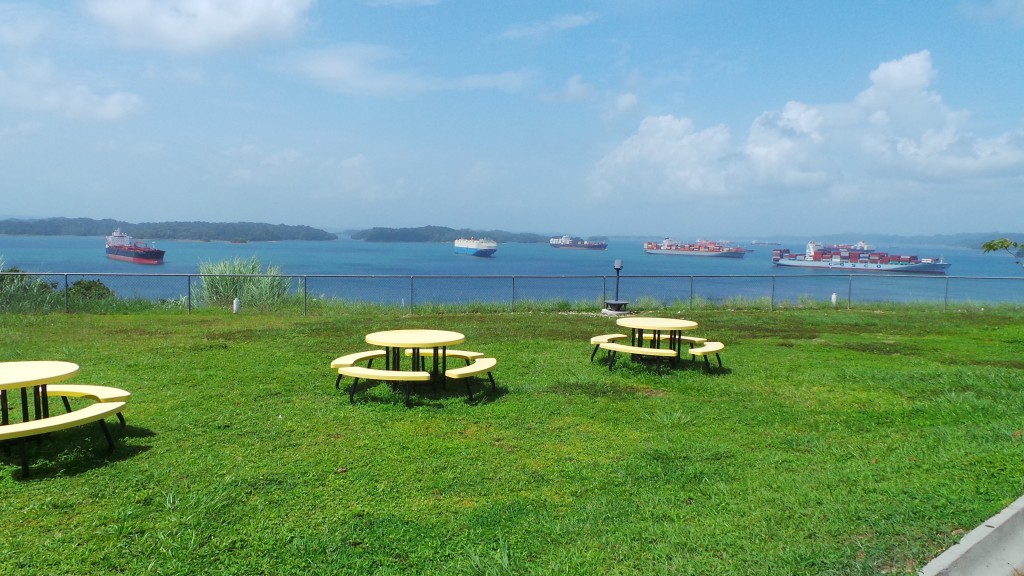 View of the Ships waiting to cross the Panama Canal

There is also a screening room where movies in both English and Spanish are shown every few minutes to explain the history of the Panama Canal and its future plans. Do not miss the video, it was extremely interesting! 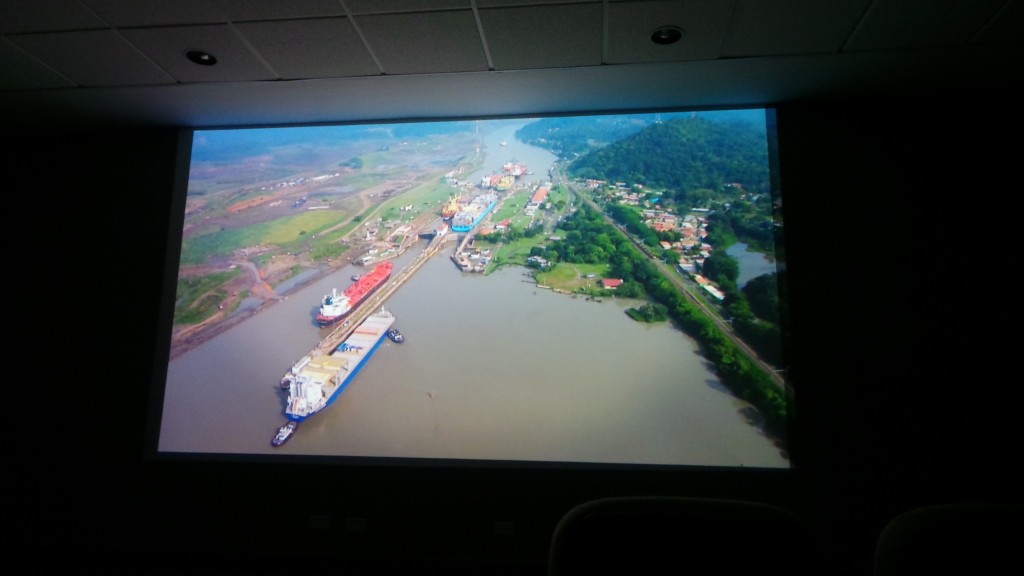 Video about the Panama Canal and its expansion

After the video I went to the viewing point which overlooks the construction of the third lock to see the progress on the expansion. I recommend visiting during the week as there are not too many people. 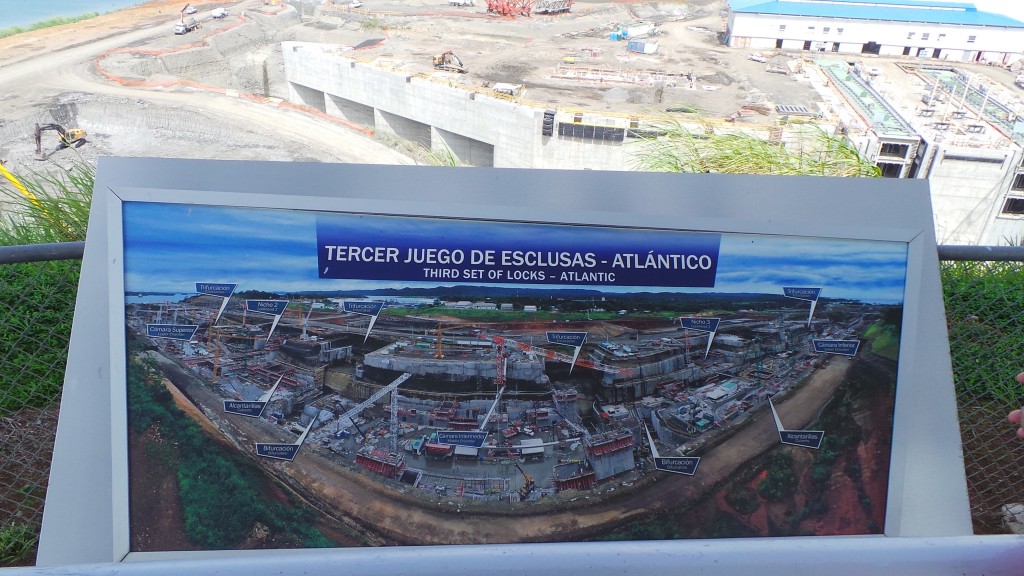 It is hard to describe the impressive view over the work! Although I am not in Panama all the time, I have been told that for the expansion there have been many events created to give the Panamanian people the opportunity to visit and be a part of history in its creation. I was told that when the lock doors arrived from Italy there was a big celebration as they were lifted and lowered into their compartments. I am extremely proud of my country!

After the decision to expand the Panama Canal, many environmental studies were made to ensure that the expansion would not affect the wilderness, amongst many other factors such as reforestation and archaeological rescue.

One of the toughest parts of the expansion lies at the Culebra Cut, the stretch between the Pedro Miguel Locks and Gatun Lake that is one of the Canal’s narrowest parts. This area was excavated and a fun fact: it is said that with the material excavated they could have built 63 pyramids like the ones in Egypt. Shocking!

This visitor’s center for the expansion is a must-see and to this date it is 93% completed! With staff members that look forward to telling you all that they know about the Canal and its expansion, as well as the beautiful setting, don’t miss it! 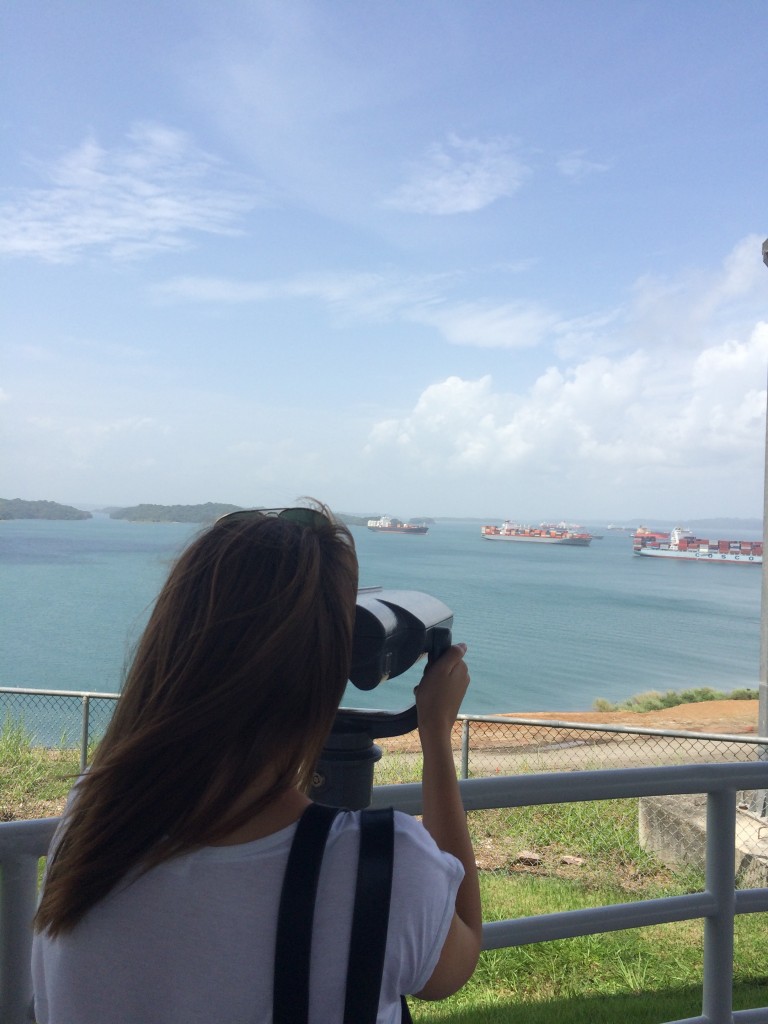 Enjoying the beautiful view over the Panama Canal

For more information about the Canal’s progress do not hesitate to visit: http://micanaldepanama.com/expansion/

Additional Information about the Area:

If you go for a day trip to Colon to visit the Gatun Locks and the expansion of the Canal, I also recommend you visit some of the beaches in the area such as Isla Grande and Portobello. There are so many beaches in the area that you can just decide to stop at any along the way; however I went to Portobello, which is approximately 1 hour’s drive from the Canal, in order to enjoy the rest of the afternoon.

If you decide to go I recommend taking bottled water and some snacks, as there are a few local restaurants but not too many options. At Portobello there is also a famous church where you can see the famous black Christ. Unfortunately when I visited the Christ was being restored, but I was curious to see it because there are many stories about it and how it came to the town. No one knows exactly what happened or when it arrived although it is rumored that it was during the 1600’s. On October 21 they celebrate the Christ and thousands of people come to the small Caribbean town of Portobello (53 miles from Panama City) for the festivities.

Planning to visit Panama? Stay at one of our properties in the heart of Panama City -Riu Panama