Although Easter is not usually a holiday I get really excited about, I thought I’d do something different this year and go on a trip. I have a few friends in Brussels, and I’d heard a lot of people tell me how fun and lively the city was, so I booked my tickets, and I was off to Belgium.

I arrived on Friday evening, after a quick 1-hour flight and took the bus to the city. I was surprised to arrive near the city centre – place flagey – in about 40 minutes. I was on my way to my friend’s place when we stumbled upon each other on the street.  A few of our common friends were in Brussels for the weekend as well to celebrate Easter, and they were all on their way to dinner. I joined them, and I am glad to say that my first meal in Brussels was a large portion of delicious fries at Frit Flagey, supposedly the 2nd best fries joint in Brussels. I was not disappointed. They were amazing and you could tell from the line outside that people were willing to wait a while before getting their warm potato goodness. After catching up with everyone, we headed back for the apartment where we continued our friendly conversations. We’d brought back some of the famous Belgian “Duvel” beer along with all your basic spirits, so the night got very inebriated, very fast.  It was really great seeing everyone, learning what they were up to, how their careers were going etc. We finished relatively early. We’d reserved our Saturday afternoon for our sight-seeing/tourist activities so to save some energy, we all headed to bed. 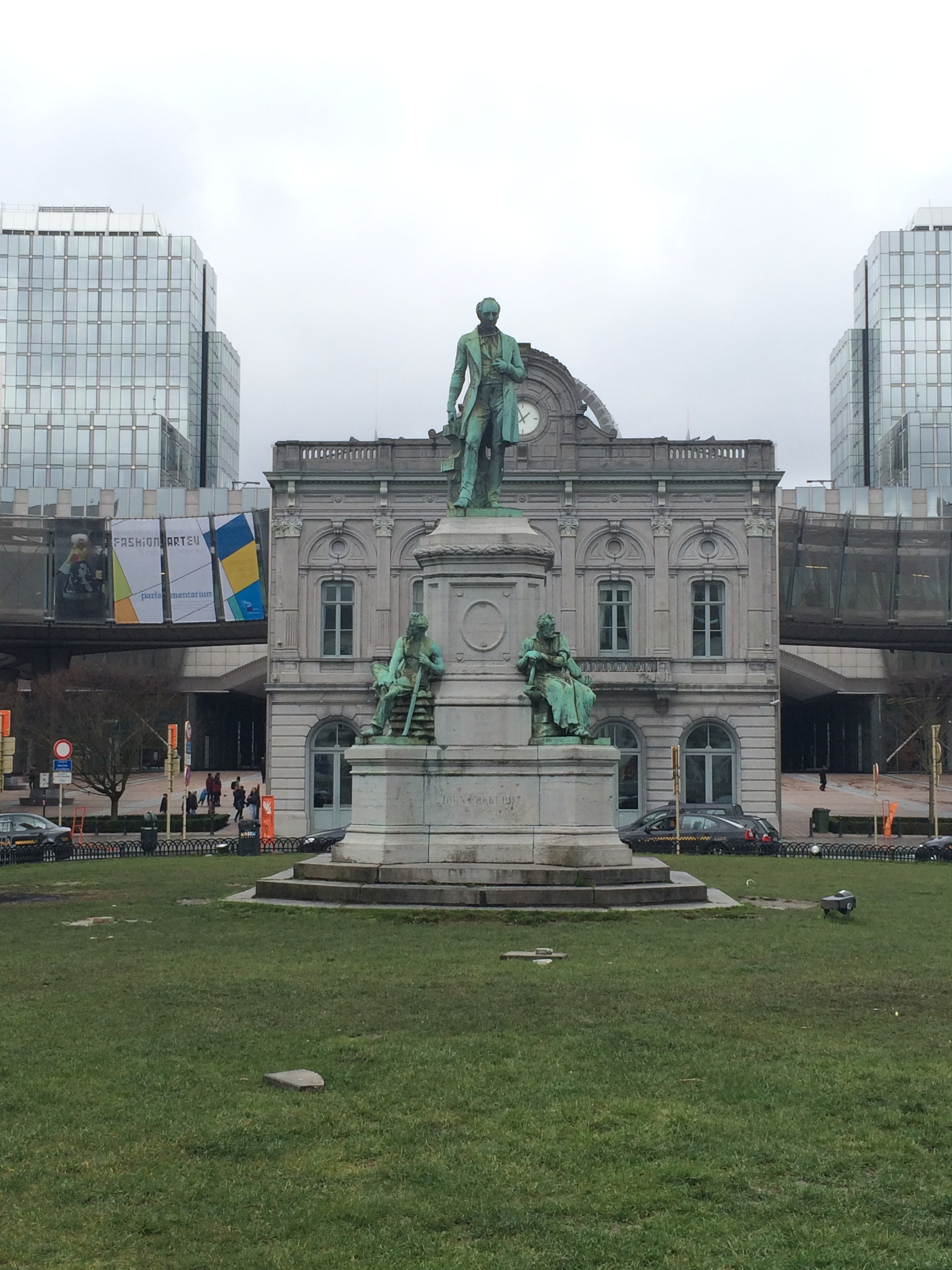 Saturday was the Liverpool Vs Chelsea game. We went to a Fat Boy Diner to watch it, but also because they serve huge burgers and we were all starving. It’s located on the Place du Luxembourg, or as the locals say: “Place du Lux”.  The European Parliament, as well as various European Institutions are located close by.  In the centre of the square is a statue of John Cockerill, a British-Belgian 19th century industrialist with the words “Work and Intelligence” engraved on it.

We followed our lunch with a little walk to the main avenue in Brussels: Toison D’or Avenue. This is where you will find the more “affordable” boutiques, as well as restaurants, bistros and cinemas.  The avenue is only one part of the immense shopping area that continues on the Rue de Namur, then on to the Avenue Louise, where you will find the major jewellers, such as Cartier or Holemans. 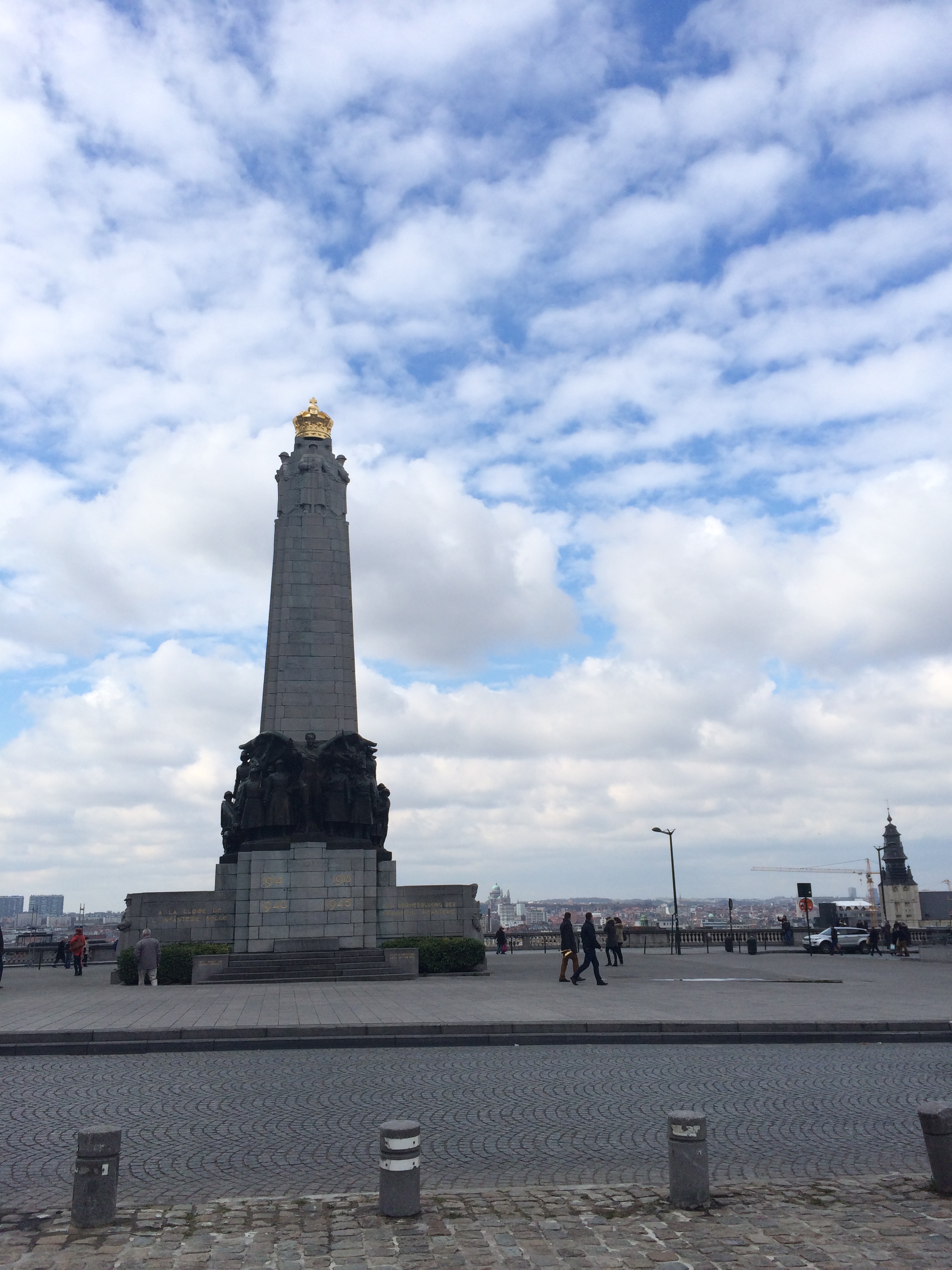 Our friend brought us to the Place Poelaert, where you can enjoy one of the most beautiful views of Brussels. The square itself is right in front of the Palace of Justice, and it is the biggest square in the city. In the centre is a basilisk like building, erected in honour of the soldiers who fought in the 1st and 2nd World Wars. In addition, to descend from there to the quarter of Marolles is an amazing glass elevator, from which you can keep enjoying the breath-taking view.

Brussels from the Poelaert Viewpoint

Brussels, or rather the city of waffles, beer and chocolate. I was shocked at the amount of stores that sell at least one of these three items. And of course, as it was Easter, I visited a lot of different chocolate shops. I decided on the Pierre Marcolini chocolatier to get some of that delicious world-famous Belgian chocolate. If you ever find yourself in Brussels, you need to try the chocolate here, it is amazing! 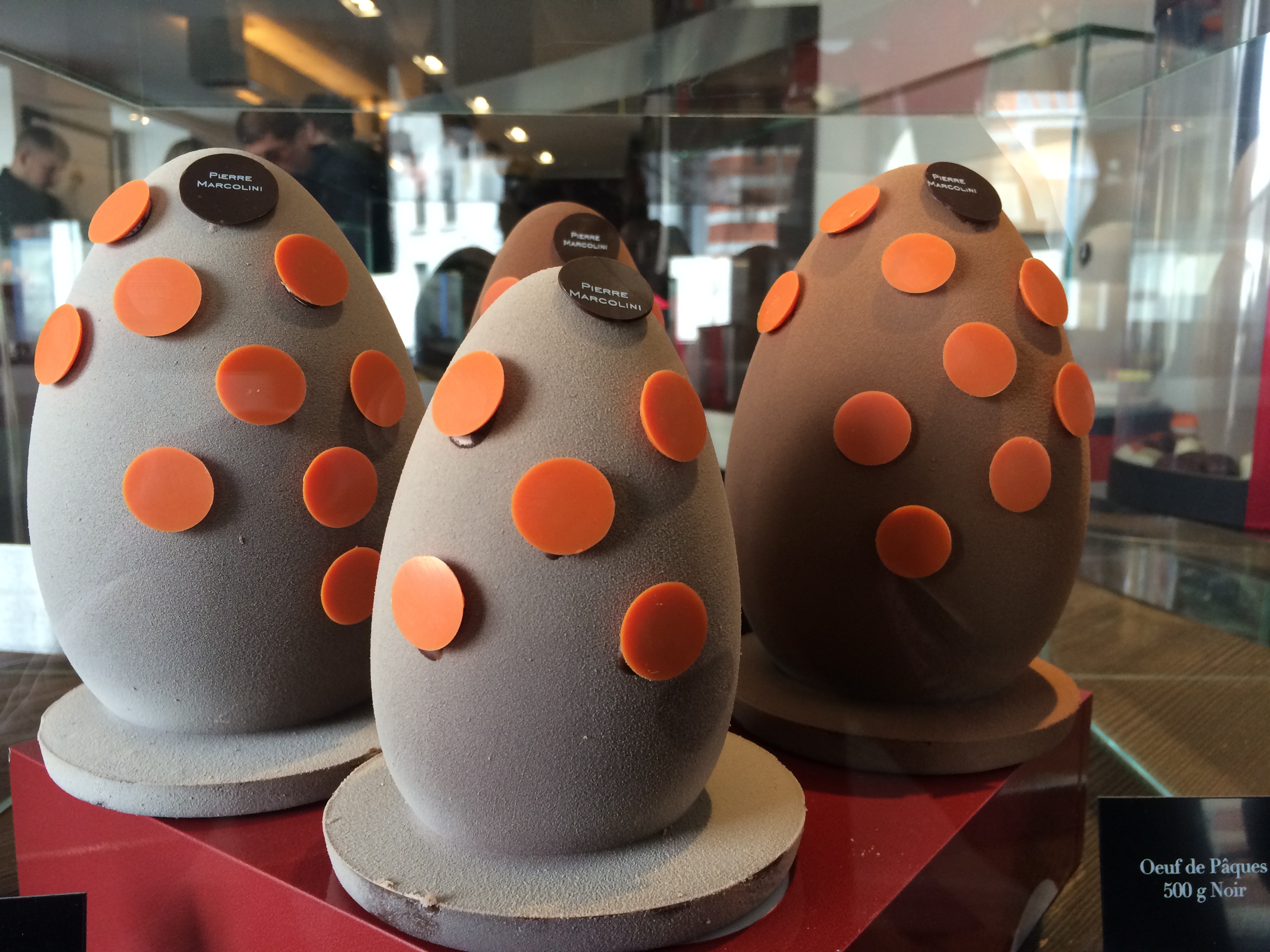 After a few more stops (art galleries, waffle shops, souvenir shops), we continued to the Belgian landmark: Manneken Pis. So many people were gathered around in a circle for such a little thing, but it is a must-see attraction in Brussels and I won’t deny taking a selfie with the little peeing baby statue! 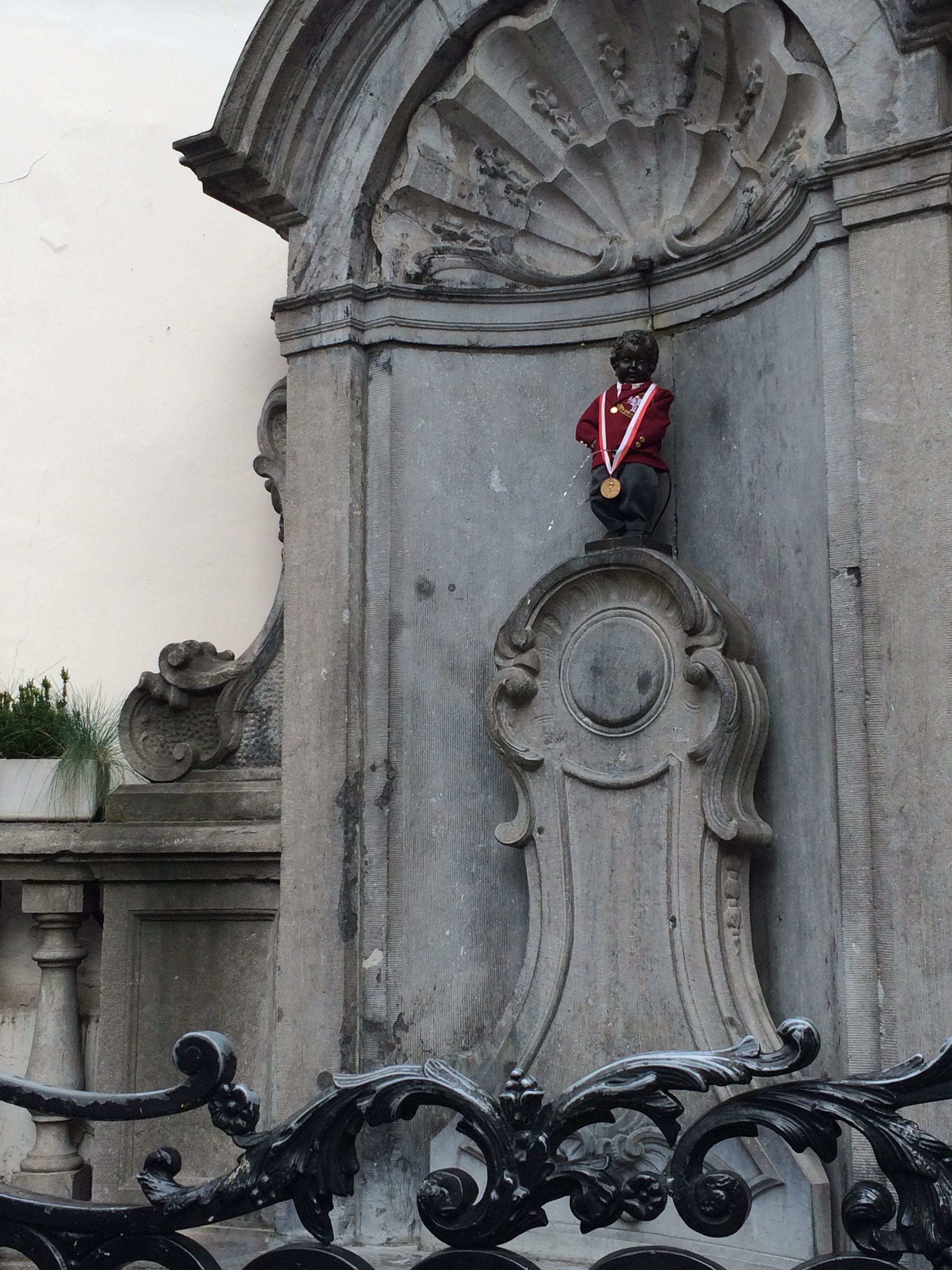 Just a bit further is the Grand Place, central square of Brussels. It is huge and it’s surrounded by guildhalls, along with the city’s Town Hall, and the Museum of the City of Brussels. It is the most important tourist destination here and is by far the most memorable landmark in Brussels.

A famous Belgian legend says that the Town Hall architect jumped from the very top of the building when he realised the building was asymmetric. That’s taking perfectionism to a whole other level. 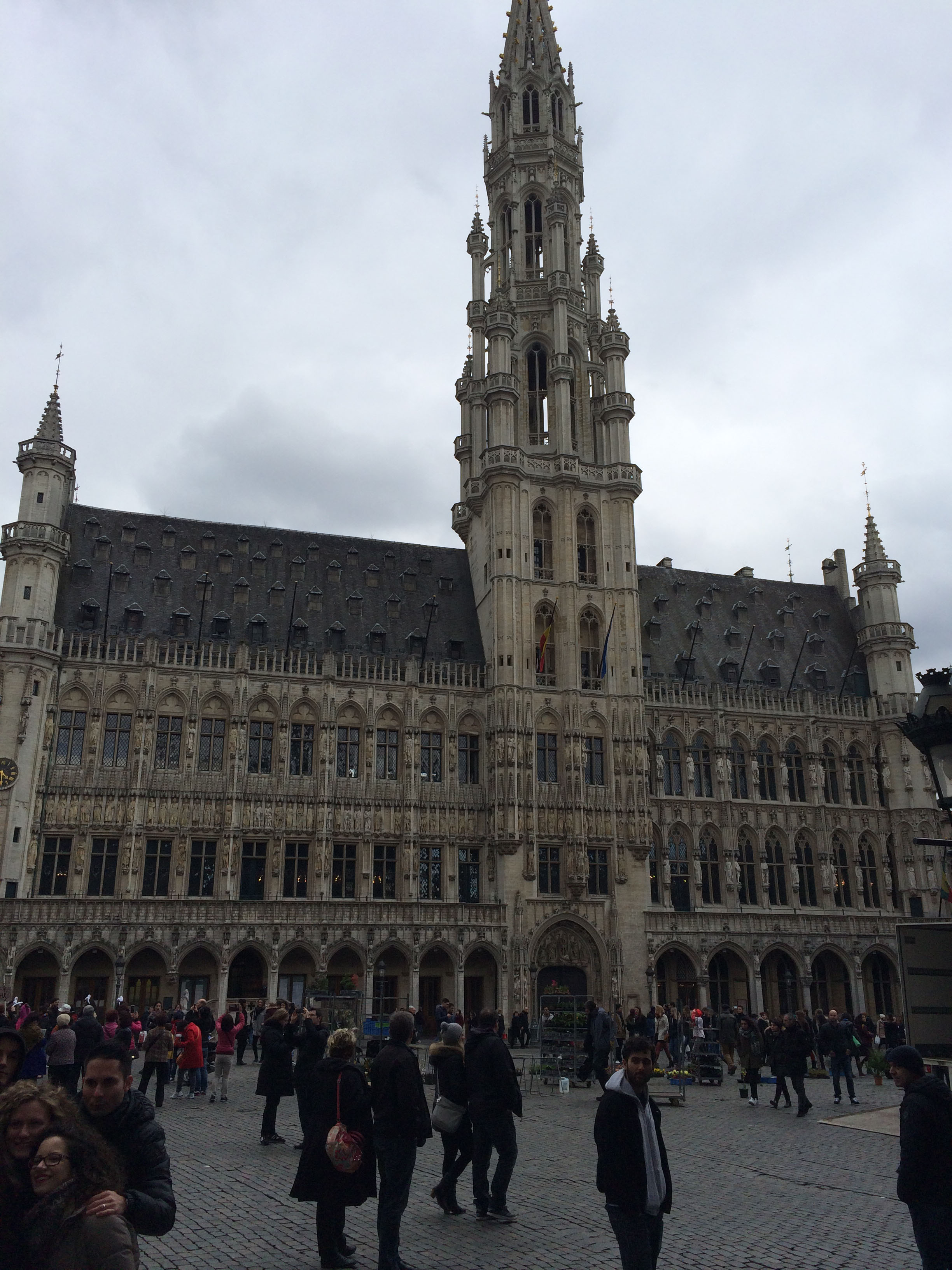 Our last destination for the day was the 5-star Hotel Metropole, located in the heart of the city. We were greeted by Mrs. De Munck and we had an interesting conversation about the hotel’s history. It is a family owned hotel built in 1895 and it is one of the oldest hotels in Brussels. They have kept their status as one of the best hotels in Brussels and it just hosted the 10 year celebration party of the “C’est du Belge” show.

The Brussels City New Year’s celebration was done with Hotel Metropole for the first time in 2015. Also, a lot of celebrities such as Robert Sheehan, Amelie Nothomb and even 50 Cent have stayed in the hotel. 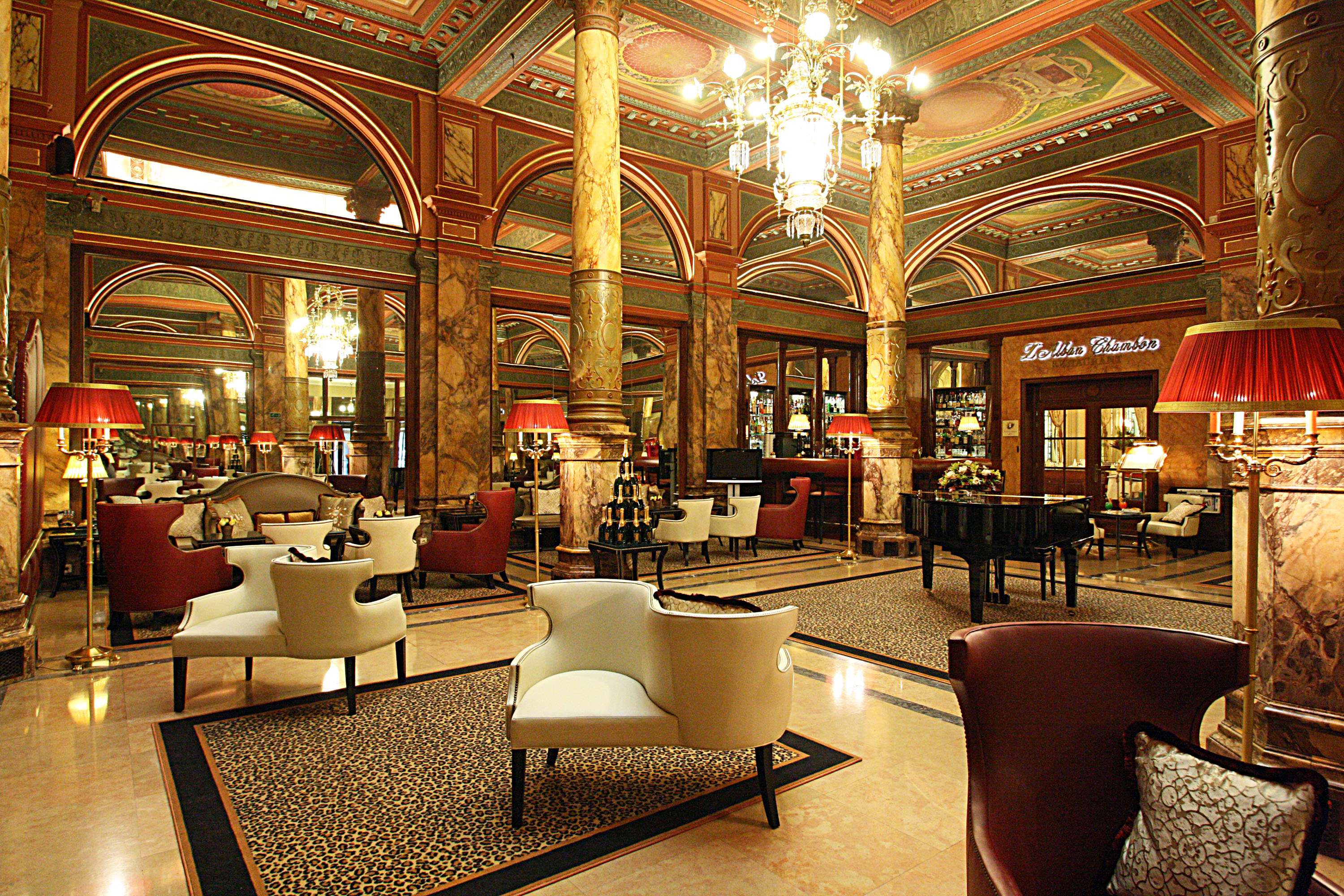 We visited a few of the rooms, along with the meeting areas and dining rooms. As a fellow Frenchman, I couldn’t help feeling a bit patriotic after learning that the architect who designed the elevator had also done the one for the Eiffel Tower. Indeed, the décor in the hotel is amazing and personally, I’m a sucker for high ceilings. We were also informed by Mrs De Munck that the ceilings had actually been renovated. When they recovered the hotel after the war, the ceilings were all painted grey, but during the renovation, they found that there were actually beautiful mural paintings underneath. These murals are now protected however the exact date of when they were made is unknown. 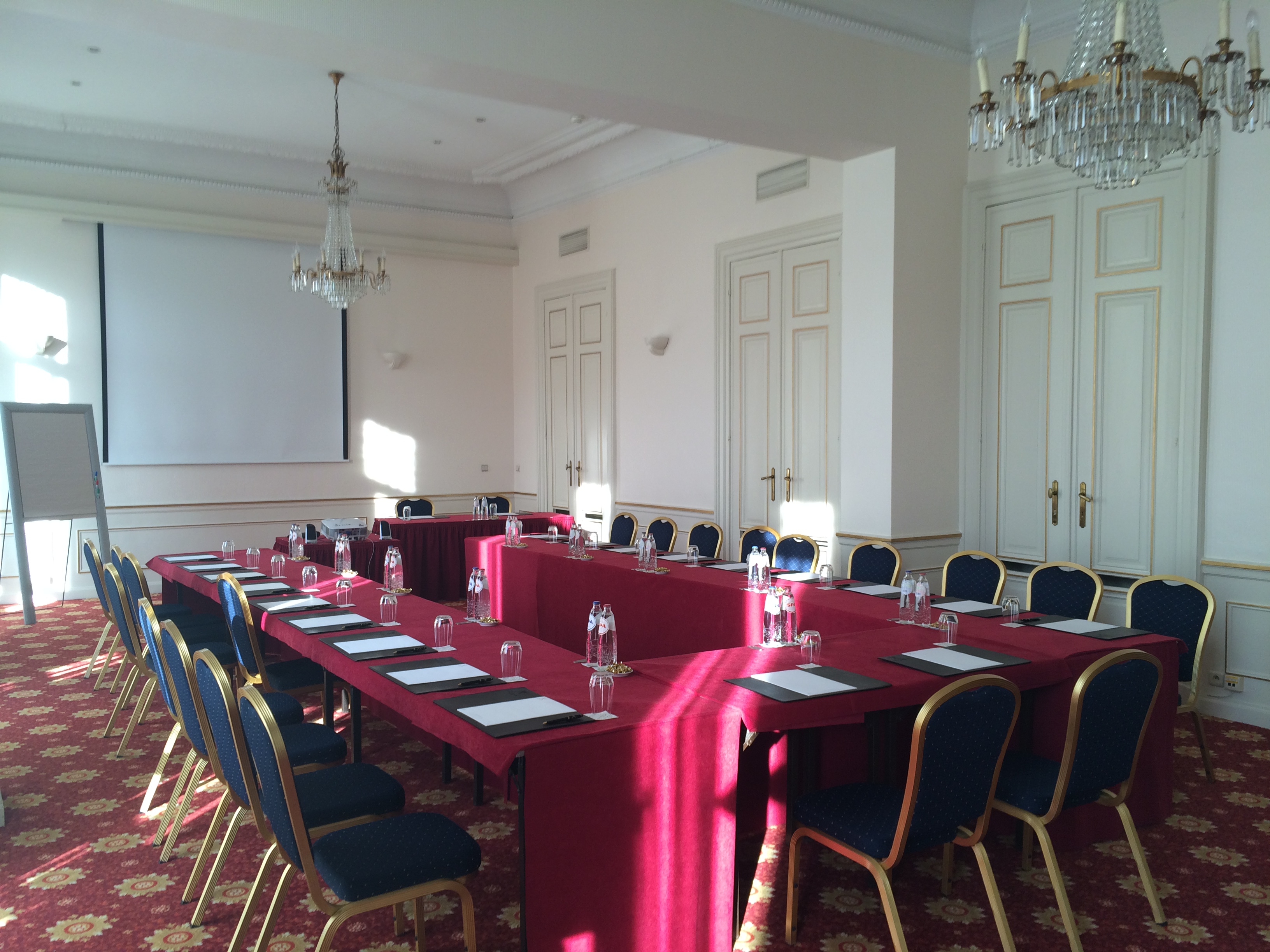 The hotel is in two parts, with one traditional side, and the other one more modern. 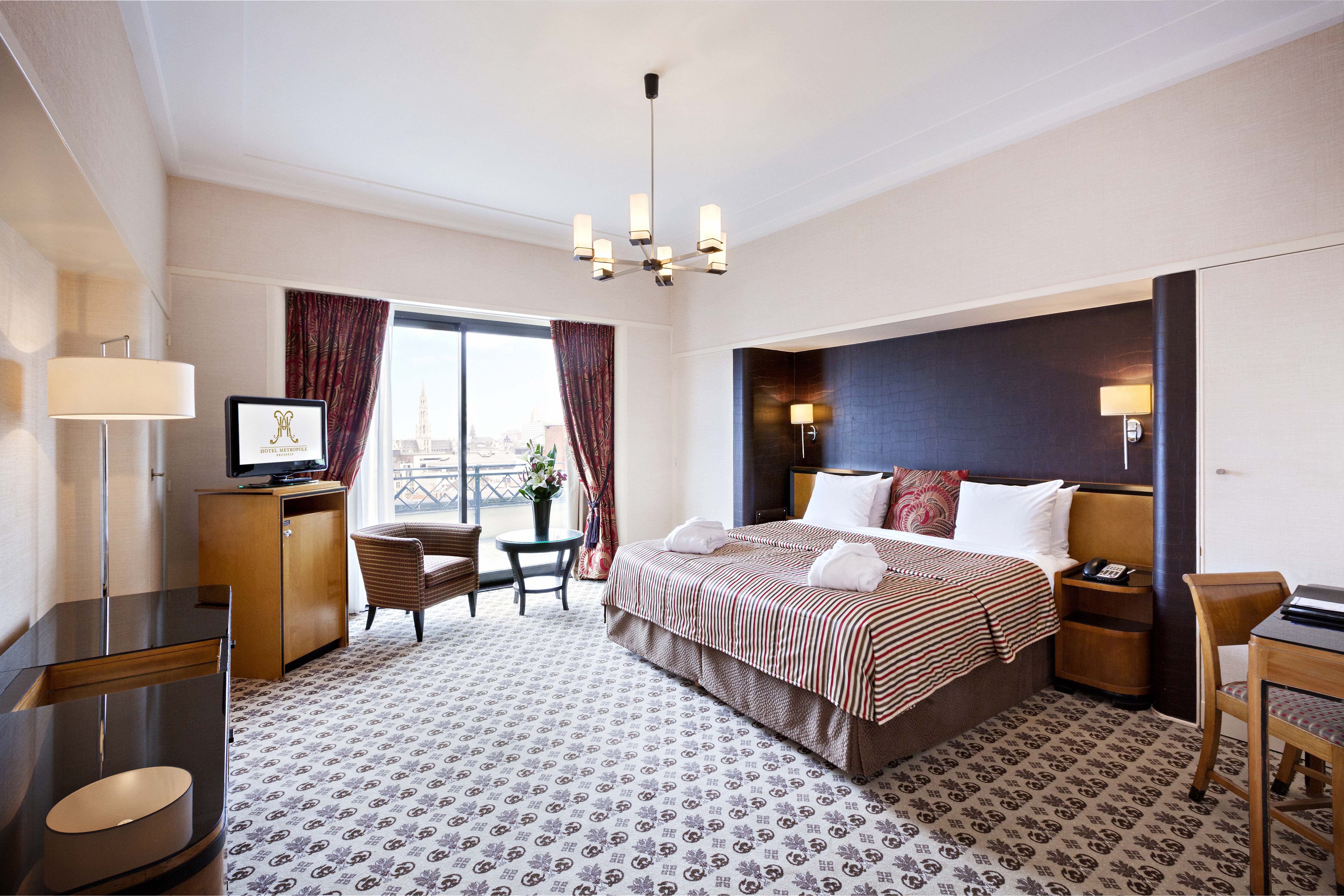 Rooms with a more Modern Design

After the tour, we thanked our very generous host who took time out of her busy schedule to show us around, and headed back home. We were joined shortly afterwards by some more people and we were on our way to dinner. I won’t make a detailed itinerary of the night, but I will say that if you do go to Brussels, you need to go to the street called Impasse de la Fidelite. Go crazy and try something new, like an absinthe shot or pipe at the Florist, or enjoy one of the 2000 beers available at the Delirium, the possibilities are endless!

Stroll along the many parks in Brussels

Our Sunday started later than we had originally planned. We went for “Moules-Frites” in a restaurant called The Greenwich Tavern, in the old-town, and it was incredible. The mussels come in a huge casserole and you are sure to be full when you leave the restaurant. After a short digestive walk, we visited the Brussels Vintage Market. The market takes place only once a month and welcomes about 1000 people every time. There are lots of nice terraces and cafés nearby for lunch or to have a drink amongst friends, along with 80s music playing on loudspeakers throughout the afternoon. The atmosphere is great and it is perfect for a relaxing Sunday afternoon. 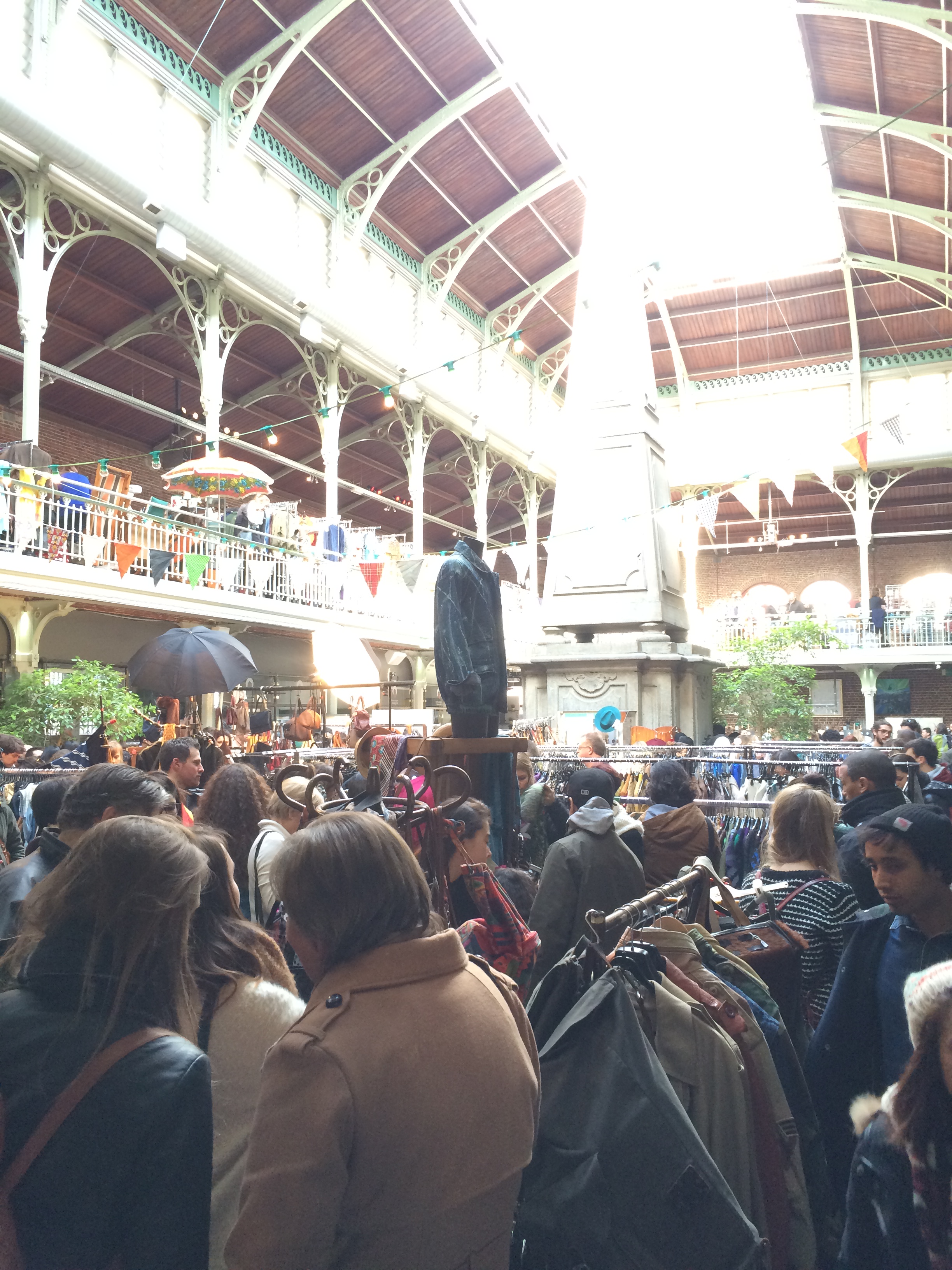 After a day spent under the warm Belgian sun, it was time for me to say goodbye and be on my way. I took a Brussels Air flight at 21:30, which was surprisingly good, and arrived in London at 21:30 (love this time difference hack).

So my Easter weekend had ended, but it was an amazing experience. Brussels is a fantastic city and I will definitely be going back soon. Now, time to start planning my 2016 Easter trip!

Nicolas is our very own Sales & Marketing coordinator at Luxury Hotels Group. He joined the WHM family beginning of January and will be pursuing his studies in Switzerland after the summer. With an international background from France and the Philippines, he has also lived in various major Asian cities such as Tokyo, Shanghai and Singapore. Although Asia is his home, he moved back to Europe to follow his dream and study hospitality management. He is extremely passionate about cinema, F&B, and of course, luxury.