The Strand is one of London’s most scenic and renowned roads to walk down. Running adjacent to Embankment and the River Thames, it begins at Trafalgar Square once you leave Charing Cross Underground station and eventually leads on to Fleet Street, which was made famous for being the original home of Britain’s beloved newspapers. Indeed, a walk down the Strand is very much advised when visiting London, and it really is quite pleasurable. It is only around three quarters of a mile in length and should you decide to walk down it during the week you will see the hustle and bustle of London’s commuters making their way to their offices – look out for those wearing trainers, their smart shoes will be stored away in their bags.

Begin your journey at the world famous Trafalgar Square, where you can perhaps pop in to the The National Gallery to admire some of the most important pieces of art. Trafalgar Square itself is a marvel to behold, especially now that the fourth plinth features a bright blue cockerel. Of course, Trafalgar Square is also home to Nelson’s Column and the lions that guard it, as well as a wondrous fountain which is refreshing to sit by, especially when the weather begins to head up.If you happen to be visiting on a special holiday, such as St Patrick’s Day or Chinese New Year, then you may just find yourself in one of the most lively and vibrant parts of London as Trafalgar Square really becomes the centre point of some fun-filled celebrations and entertainment.

Once you have spent some time in Trafalgar Square, head down past Charing Cross Underground station and along the row of shops. From here you will soon find yourself walking past some of the city’s greatest and best known theatres. Indeed, the Strand was London’s biggest hotspot for theatre and entertainment in the Victorian era, however due to the redevelopment of the East Strand in the 1890s, along with the addition of the Aldwych and Kingsway roads which lead off from the Strand, the road lost some of its finest theatres. 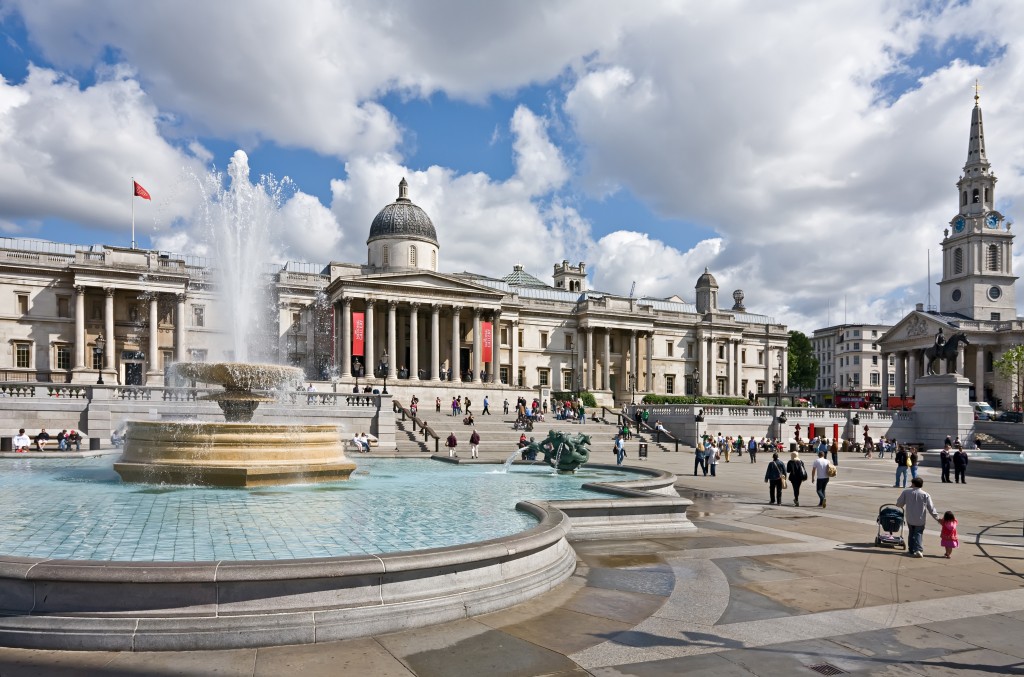 However, there are still a few diamonds to be found today. The Adelphi Theatre will probably be one of the first to stand out with its bright, glittering lights and giant signs outside. At present the theatre is home to Made in Dagenham, which stars Bond girl Gemma Arterton. The Savoy Theatre is one of London’s most famous and it is very hard to miss on the right hand side as you walk down towards Fleet Street. It really sums up the West End theatre scene so well, and at the moment you can catch Robert Lindsay treading the boards in Dirty Rotten Scoundrels. Past shows have included Let It Be and Cabaret, both showing the high calibre of entertainment that can be found on the Strand.

Further along you will come across the Vaudeville Theatre, which has been a permanent fixture on the Strand since 1870, although the current building opened in 1926. The Vaudeville Theatre offers a wonderful mix of shows starring some of television’s best loved stars. Other theatres in the area include the Garrick and the Lyceum theatres, although they are not located directly on the Strand. It’s not just theatre that makes the Strand one of the most historically important when it comes to the arts. In the 19th century, the street saw a lot of renovations  and soon became a very popular spot for the elite writers of the day. Charles Dickens, William Makepeace Thackeray, John Stuart Mill and Thomas Carlyle to name but a few would all gather here. If you happen to notice no 142, this is where the physician and publisher, John Chapman, once lived. This is perhaps of little surprise given that soon after, the adjoining Fleet Street would become one of the most renowned destinations within the newspaper and magazine publishing industry. If you get peckish along your trip down the Strand (it really isn’t that far to walk!), then you are in luck for there are a number of restaurants, cafes and bars in which you can sit down and recharge.

You are never more than a few minutes away from a Starbucks or a funky sushi bar which can offer you a quick moment of solitude. Should you fancy something a bit more substantial, Smollensky’s offers some wonderful North American cuisine, and being rather close to Charing Cross, it is a great meeting point should you wish to experience the Strand with friends. We’re thinking barbecue ribs, chicken wings, steak, fries – basically it is a carnivore’s heaven. Make Salieri your go-to restaurant if you have a show booked at one of the nearby theatres. The interior of the establishment is kitted out in decorative and theatrical puppets, masks, photographs and a wealth of theatre memorabilia. If the decor isn’t impressive enough, the Mediterranean menu certainly is. From grilled fish to delicious fresh pasta, there is so much to choose from that will whet all appetites. On the south side of the Strand you will see the famous Somerset House, which at Christmas offers one of the city’s finest ice rinks! A greatly loved arts and culture hub, from contemporary art to fun design exhibitions, workshops and all that’s in between, make sure you put aside an afternoon to spend here.

Two of the most important and historic churches in the capital can be found on the Strand: St Mary le Strand and St Clement Danes. Both of these are now located on islands in the middle of the road, making them unique buildings in the heart of a busy part of London. St Mary le Strand has been a focal part of the Strand since 1717 when it was built by James Gibbs to replace a church which had previously been demolished during the building of Somerset House, which lies opposite.  While St Clement Danes church is supposed to have originated  back in the ninth century, the building that you can see today was built by Christopher Wren in the 17th century.

It is also the resting place of one of the country’s lesser known kings, Harold Harefoot, who ruled from 1035  - 1040.  Another building of great importance which can be found along the Strand is the Royal Courts of Justice, which was opened by Queen Victoria in 1882. The impressive gothic building is certainly one to look out for and it is as beautiful as it is historically important.If you are looking for a hotel close to the Strand, ME London hotel is the perfect destination. Its modern, comfortable rooms overlook the River Thames, while its rooftop bar offers some of the best views of the London skyline, especially as the sun begins to set.