Paris is one of my favourite locations, because of the art, atmosphere and the food. On this particular stay, I planned to visit the Masculine Exhibit at Musée d’Orsay and to explore the Louvre’s exhibition of Étienne Moreau-Nélaton’s Delacroix masterpieces. I checked into Hôtel de la Trémoille. This hotel’s location could not be more perfect, right in the middle of the “Golden Triangle” in the 8th district – the Eighth Arrondissement, probably the best possible location in the heart of Paris, near both the Champs-Elysées (for shopping, dining, arts, etc.) and the Avenue Montaigne. I found myself between the fashion street of Avenue George V, the Champs-Élysées and Avenue Montaigne.

The hotel was very chic; rooms were very well-accommodated, especially as they included Molton Brown products in the bathrooms. My room had a double window with balcony overlooking a very quiet street. The bed was comfortable, with an upholstered headboard, and the room had a large closet and a seating area, perfect for entertaining, next to French windows with velvet drapes. An interesting amenity was the “silent butler” in each room. Room service placed my order in a secure closet accessible only to me and the server. The server then knocked on the door to inform me that my order had arrived. So, there was no need to scurry to find a robe to put on.

After my first night at Hôtel de la Trémoille, I slept in a little late and then ventured to the Musée d’Orsay. After visiting the Leopold Museum in Vienna during the autumn of 2012, I had become aware that male nude exhibitions are a rarity and found that from the 17th to 19th centuries, the basis of traditional Academic art training and a key element in Western creative art had been the male nude. I had toured the ‘Nackte Männer’ show in Vienna and heard that a similar exhibit was planned in Paris, this time, with a wider range of artwork.

The Musée d’Orsay’s exhibit was including the whole range of techniques: painting, sculpture, graphic arts and, of course, photography, which I was interested to see. I took a brisk, 25-minute walk across the Seine to the museum and found that the crowd was relatively light at the exhibit. The opening at the Musée d’Orsay included a male streaker (an art student from Rennes) who disrobed for a little exhibition of his own before being escorted out of the museum.

The title of the show, ‘Masculine/Masculine,’ hinted at something never clearly articulated in the exhibition itself: the fact that the gender of artists is as much at stake as that of the subjects. The history of art is dominated by male artists, so most of the work on show was men by men: masculine by masculine.

The most striking part of the show, ‘Nuda Veritas,’ was no longer a representation of the perfected male form. Egon Schiele’s self-portraits and Freud’s fleshy paintings were not ideal. In the next room, ‘Without Compromise,’ the male nude was shown as mortal in William-Adolphe Bouguereau’s Equality before Death, the withered body of Léon Bonnat’s Job and in Dead Dad by sculptor Ron Mueck.

My visit to the museum lasted well after lunch, so I returned to the hotel and, later, took another walk of about 20 minutes to L’Arc de Triomphe. I love Paris with everything at such close proximity. At the Hôtel de la Trémoille; they made my stay relaxing so that I could focus on the artwork and attractions of the city that I so enjoy. The hotel is located within walking distance of The Seine and the Eiffel Tower, both of which I enjoy walking to and especially like to see from the river cruise. One of the many charms of travelling to Paris is embracing the local culture, and understanding the nuances that make Parisians so special.

After a long day of walking the city, it was nice to come back and sit outside on the sidewalk cafe and enjoy a cool soda from the bar. Hôtel de La Trémoille had all the features of an iconic Parisian hotel. Impeccable service and creative cuisine were found at Le Louis Ii Restaurant, while a lively atmosphere at lunchtime and anytime could be found at the Louis Lounge and Bar. I ordered classic steak frites from the restaurant, and it was simple yet delicious. Service was very good with staff that were courteous, helpful and polite.

Since I really wanted to spoil myself even more, I visited La Trémoille’s excellent Spa, partaking of Les Soins Homme, the masculine care menu. The location of this hotel was also within walking distance to some of my favourite restaurants such as L’Avenue, Chez Andre and La Stresa. 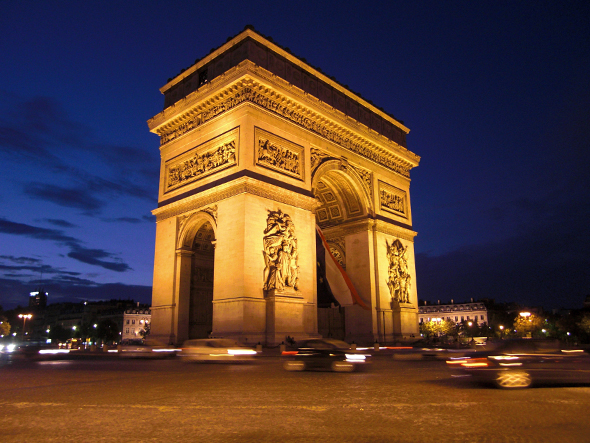 The next day, I found my way to a new residence in the city, Hotel Balzac, merely 10 minutes’ walk from its contemporary sister Hôtel de La Trémoille. I’m eager to see what this hotel has to offer. Hotel Balzac has an amazing location, right off the Champs-Elysées and very near to the Arc de Triomphe; the hotel’s restaurant, Pierre Gagnaire, is one of the hottest restaurants in Paris, with three Michelin stars; the chef is a “culinary genius.”
I was escorted to my room and what a wonderful ambiance! On a side table was a plate of different coloured macarons and madeleines, with a few other lovely treats and bottled water. I had booked this hotel in advance, and they were prepared for my arrival as the bedroom was beautifully prepared. I really liked the way it had an informal atmosphere and all of the staff enjoyed mingling with the guests. The room was spacious with a king bed draped in tapestry and the view from the window’s double doors was of the quaint residential Parisian streets. 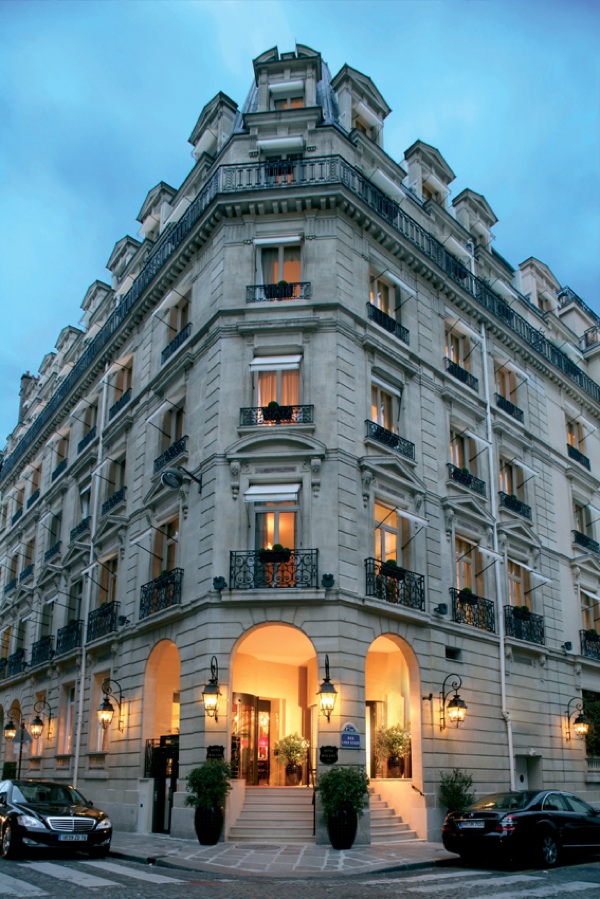 I ventured back outside to the Champ Elysees; from here, the Arc de Triomphe was to the right, HSBC Bank was straight ahead and a few blocks to the left was a macaron-crafter, Laudree. The subway was close by as well, making it very easy to travel around. I decided to visit Les Deux Magots late in the afternoon, a famous café in the Saint-Germain-des-Prés area, a quick, 10-minute ride across the Seine from Hotel Balzac. It once had a reputation as the rendezvous of the literary and intellectual élite of the city and is now a popular tourist destination. Its reputation is derived from the patronage of Surrealist artists, such as Jean-Paul Sartre and writers, such as Ernest Hemingway. Other patrons included Pablo Picasso, James Joyce and the American writer Charles Sutherland.

I felt as though I was experiencing Paris’ history at Les Deux Magots; the cafe was especially charming at night. I met a friend here, who recommended sitting outside, whether or not it was cold or raining; fortunately, this was a clear evening. We watched people, enjoyed Paris, and then window-shopped on St. Germaine. I ordered a Truffle Risotto, which was absolutely divine, along with hot chocolate that was heavenly. The inside of the café was lovely with old world charm and character. I returned to my hotel room later, well-nourished mentally and physically. 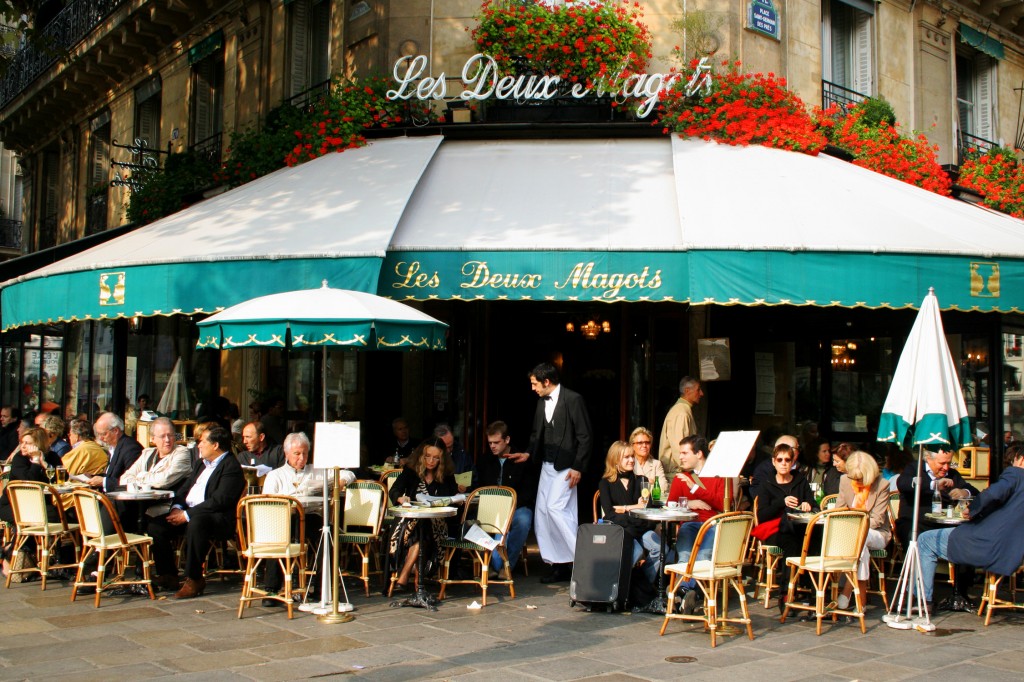 Eugène Delacroix occupied a special place in Moreau-Nélaton’s collection. The latter’s father, Adolphe Moreau the Elder, was one of the first great collectors of Delacroix because he recognised “the brilliant draftsman’s outstanding qualities, too long overlooked except by a clear-sighted élite.” Moreau-Nélaton’s artistic tastes and choices were influenced by his familiarity with Delacroix’s work.

I travelled through the exhibit, which only enticed me to want to see Delacroix’s former home. I moved on to the Musée Delacroix, where souvenirs of Delacroix’s trip to Morocco and works by friends of the painter, including Paul Huet, Léon Riesener, and Richard Parkes Bonington were on display. Imagining Delacroix’s final days near the Church of Saint-Sulpice, where he was in charge of decorating the chapel, filled me with admiration for this humble, yet extremely talented artist. I will make a point to return to the Church of Saint-Sulpice to see the murals of Jacob Wrestling with the Angel and Heliodorus Driven from the Temple.

Where else in the world can travellers see the beauty and cultural flair so intricately woven together as it is in Paris? I find that the various art movements remain alive in Paris, since this is the city where so much artistic life was generated. It is my belief that by breathing the city’s air, one can absorb this life. I will definitely return to explore more of the luxury and enchantment of this bustling and vibrant city!