Last weekend I flew to Stockholm to visit a great Swedish friend (Sara) that I met while travelling in Indonesia a few years ago. The flight from Amsterdam to Arlanda airport on Friday was fairly fast and before I knew it…I was in Stockholm!

Already having done some research on all the things I wanted to see, we had a long catch-up session on the first evening and made a plan for the next few days (in hope of good weather). We then went for a nice sunset walk at a park north of Stockholm in Solna. I love how the sun is up until around 9:30pm; summer is steadily approaching!

A beautiful sunset at Råstasjön

On Saturday morning we started my tour of Stockholm on the island of Kungsholmen where, because of the incredible weather, we decided to walk along the water towards the city centre and had the most amazing views over another island named Essingen. I was surprised at how many little islands Stockholm is comprised of… 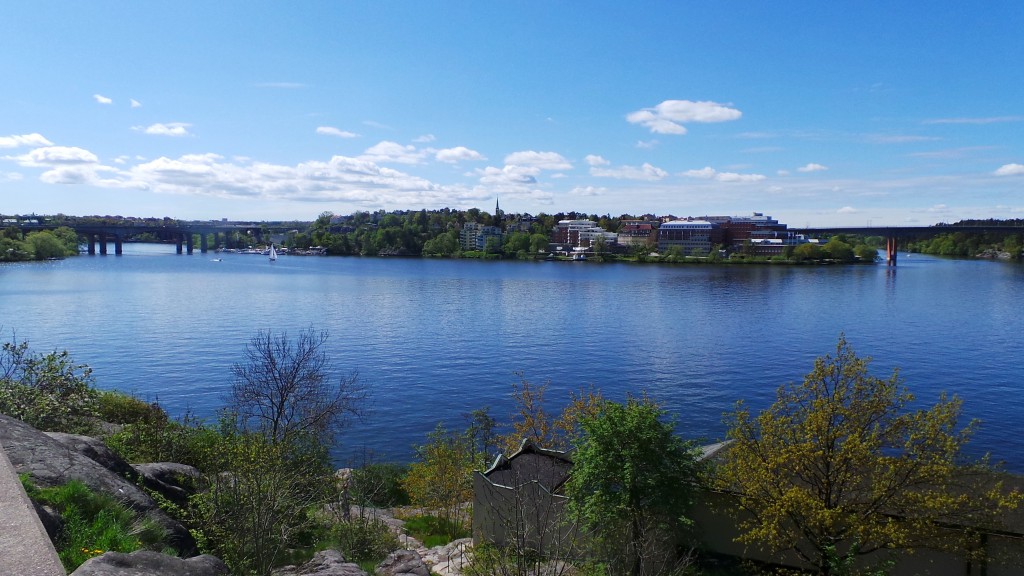 The view of Essingen

So much blue in this Panorama! 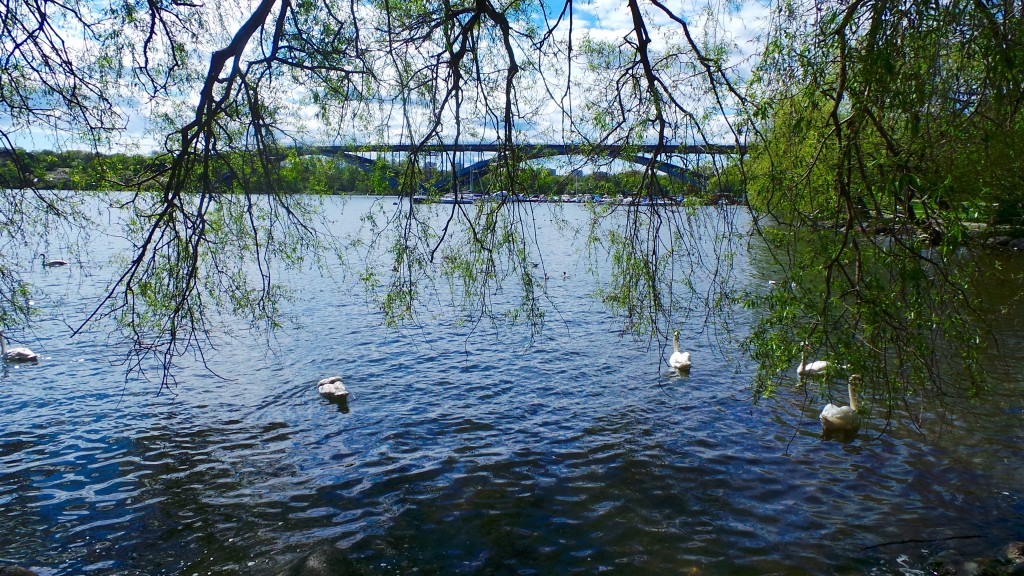 Tip: If you are sporty, this route would make an unforgettable running track!

We continued walking along the rustic track eventually reaching a road that led all the way to the Stockholm City Hall. There are several restaurants with terraces on the water and beautifully placed benches along the way to the city hall. It is the perfect place to sit and enjoy a view of the city! There were also the most beautiful residential houses with little restaurants at the bottom – definitely one of the best addresses to have in this city. The road is often featured in postcards and I can see why. 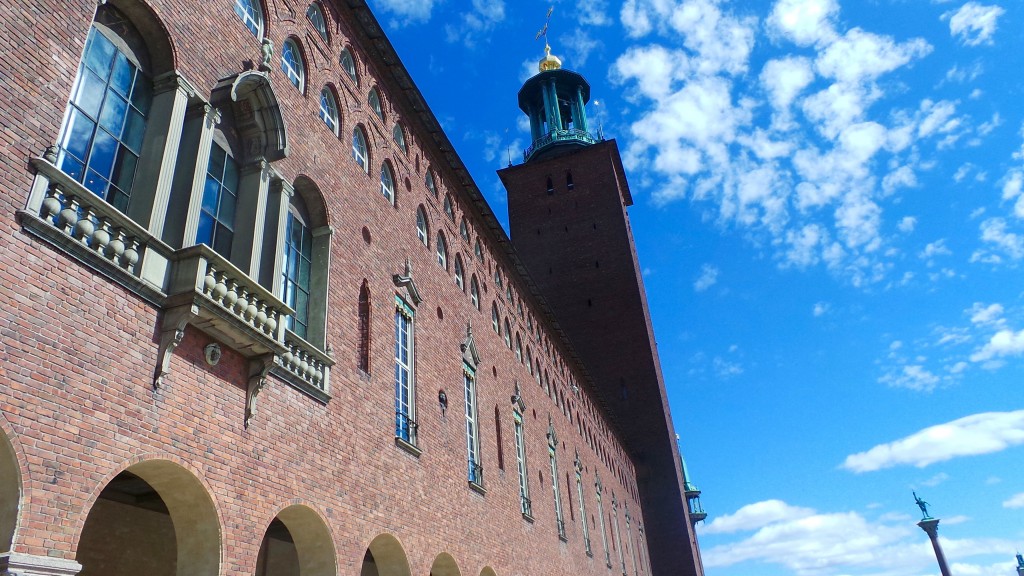 We reached the city hall a few minutes later and it was very impressive! The rather large building, made up of an astounding eight million bricks, was built between 1911 and 1923. It is the workplace for politicians and where city council meetings are held. There is a beautiful garden on the waterfront of Lake Mälaren’s with a scenic view over Riddarholmen (yet another island). The atmosphere was extremely lively as people took pictures (I saw quite a few couples taking their wedding pictures) of the fountains and statues and sat on the steps to enjoy the sunshine! We sat down too, we couldn’t resist! 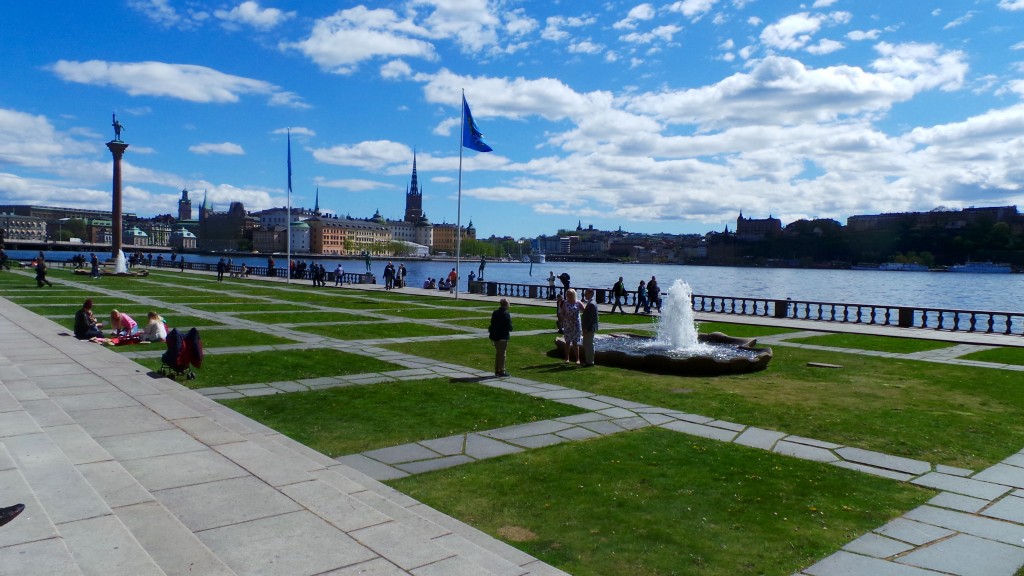 The Garden of the City Hall 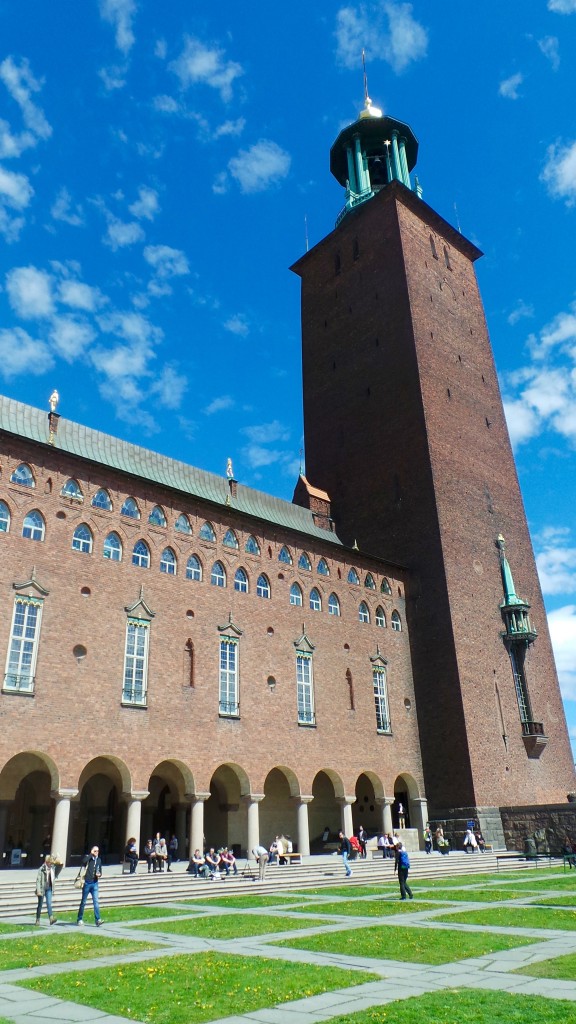 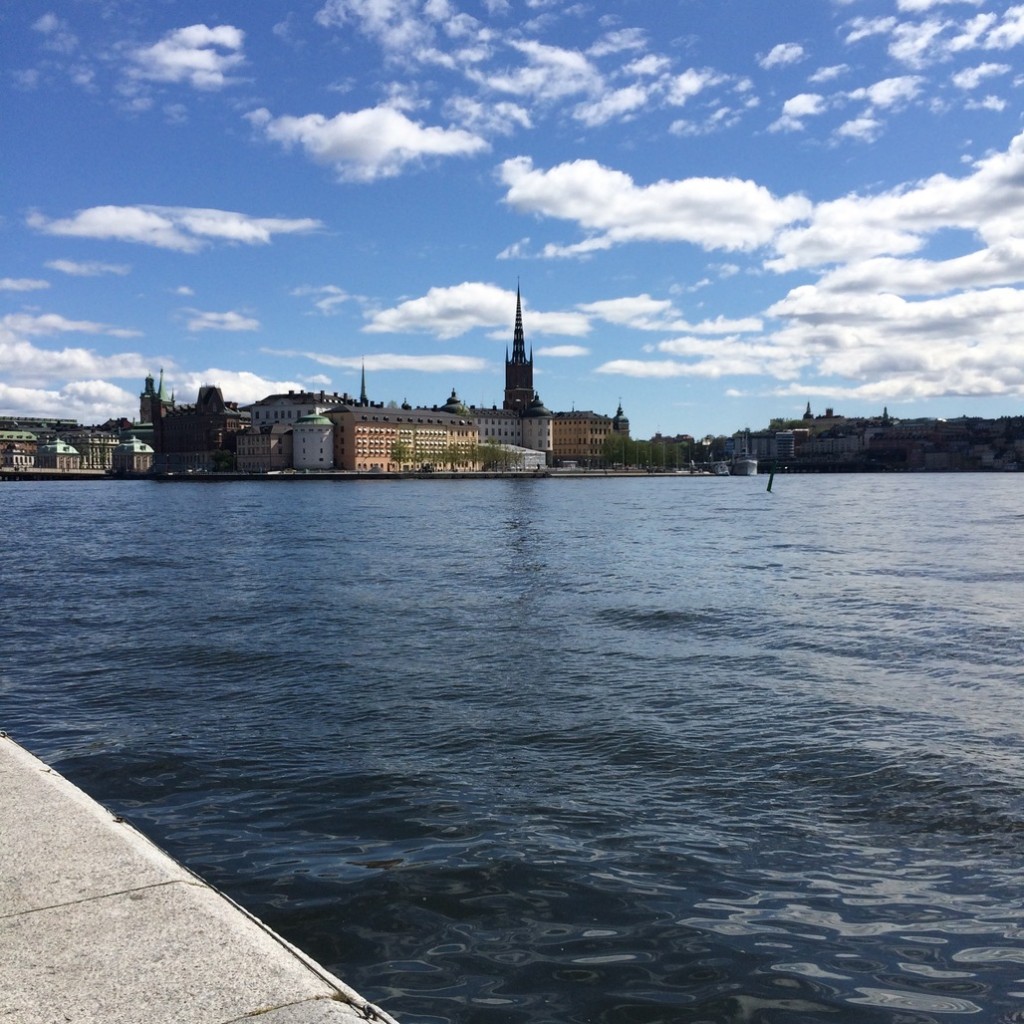 View from the steps at the City Hall 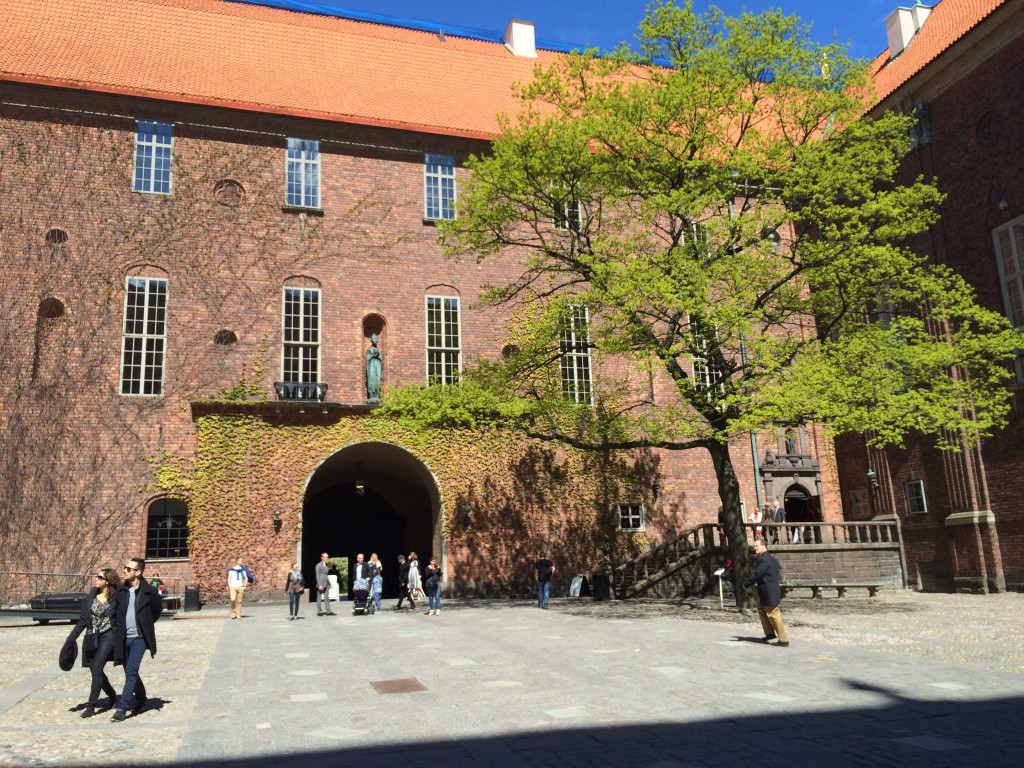 The inner court and an entrance to the City Hall 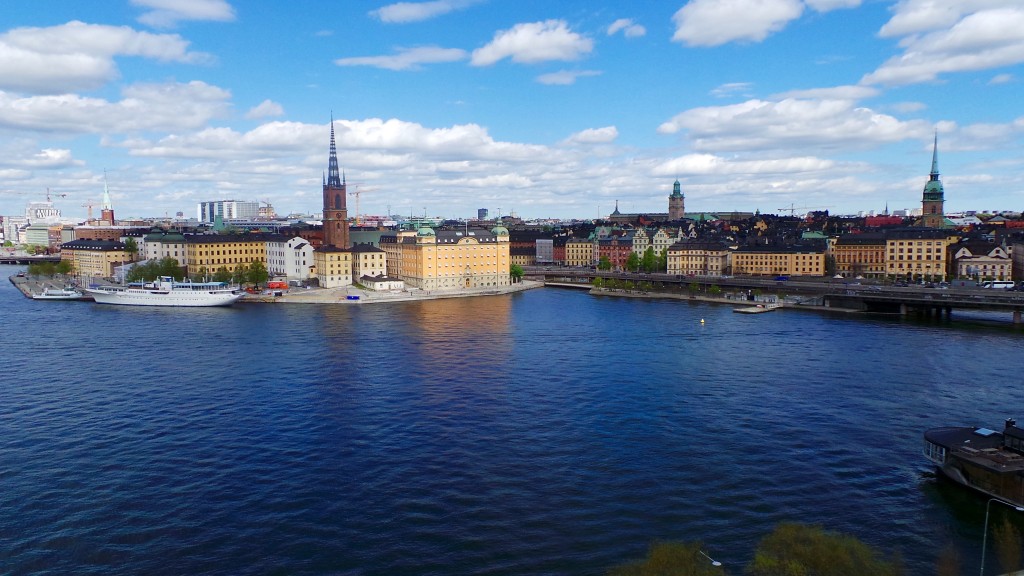 When you google search Stockholm you always see a fantastic picture with a view over the city. I went there wanting to be able to take the same picture!  After the city hall Sara and I went on to the next Island to find the place where we hoped to witness that very view (Sara had also never been). The walk there was really pleasant too as the streets are narrow with vintage boutiques, independent restaurants, bars, and tiny shops. 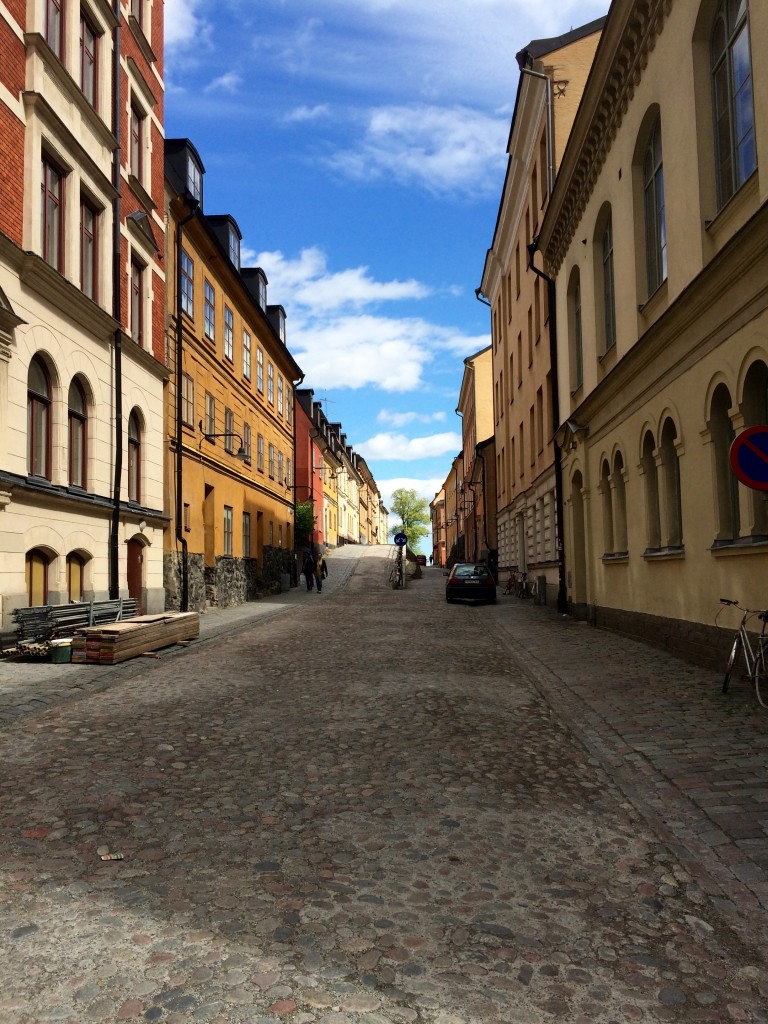 Walking to Monteliusvagen on the Island of Sodermalm 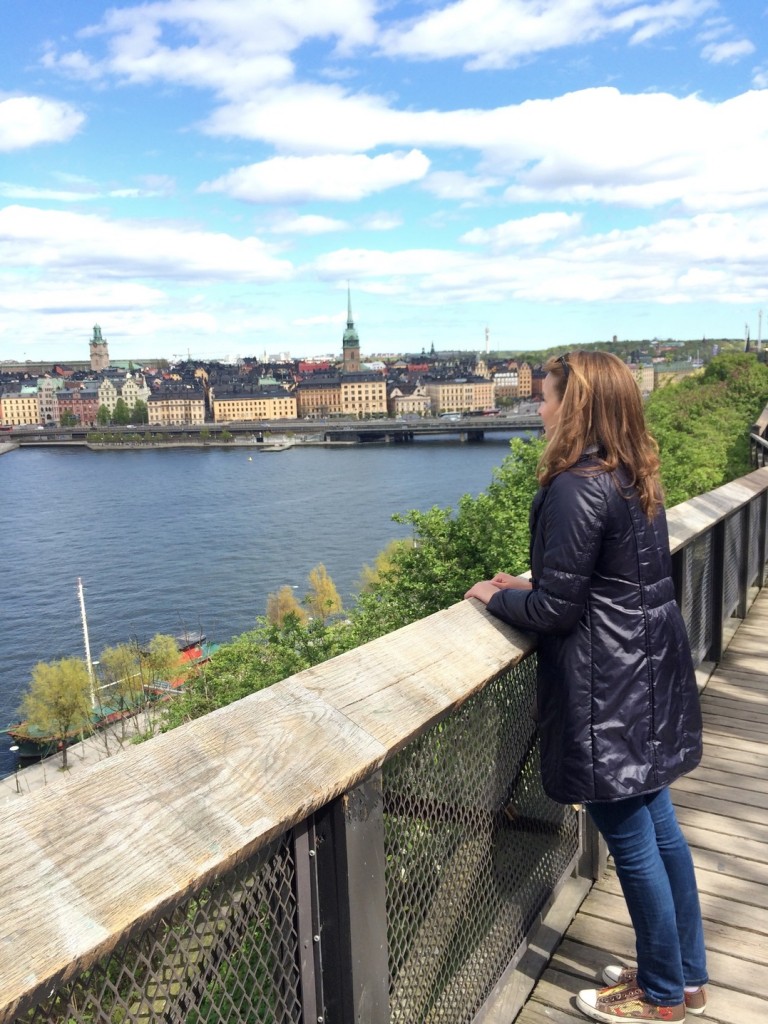 View over Stockholm from Monteliusvagen

Monteliusvagen is a walking path on the island of Sodermalm and is located on a Cliffside – the view I was hoping for (and a bit more!) This is a must and it could be even better during sunrise or sunset. 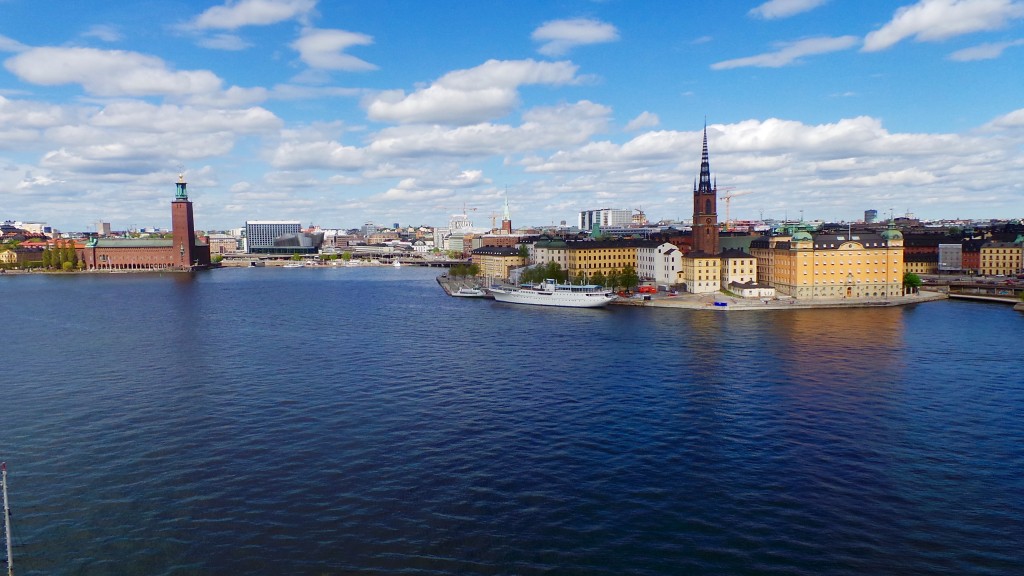 While we walked towards the old town (we ended up getting so distracted we didn’t see it until Sunday) we saw a Ferry boat that takes you to another one of the islands called Djugarden. This island is the perfect place for families. It has an amusement park that is visible from the boat and all kinds of entertainment. It is also home to some of the many famous museums like the Vasa Museum and the open-air Museum. We walked around and went towards Rosendal Park where the Rosendal Palace can be found. 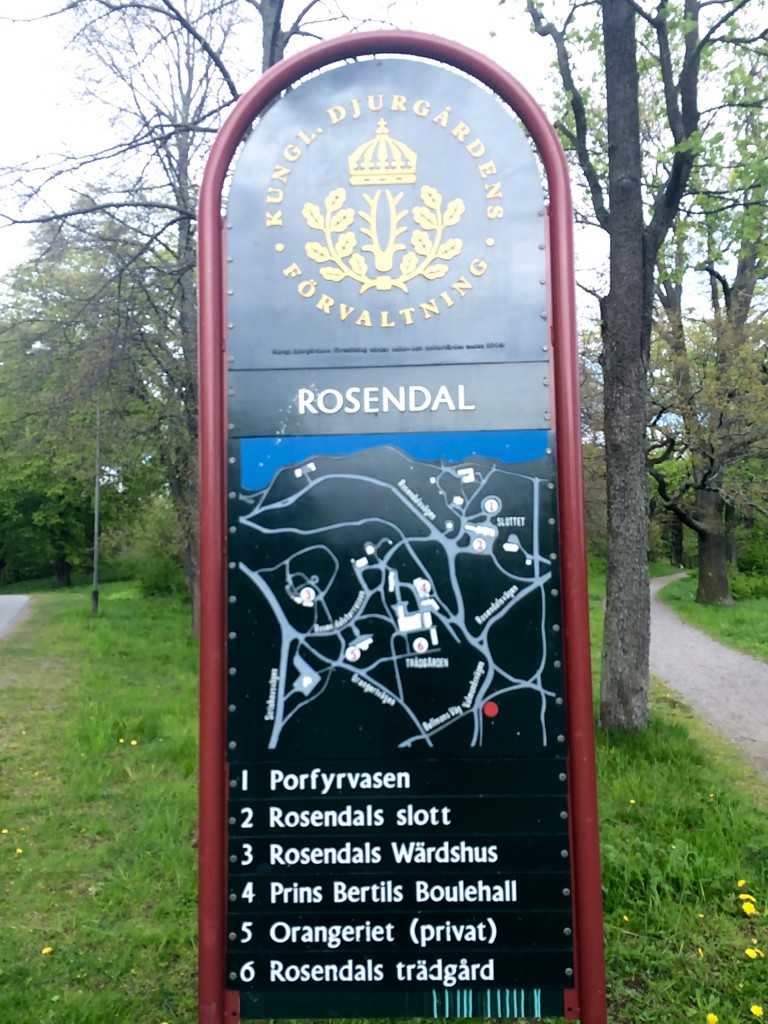 The Palace or Slott (in Swedish) belonged to Karl XIV Johan who used it as a country ‘house’. The one that is there now is the reconstruction made by Frederik Blom after the original was burned down.  It is in a peaceful location and surrounded by vast gardens. Unfortunately it was not open to visitors however, during the summer months it is possible to go inside for a tour. 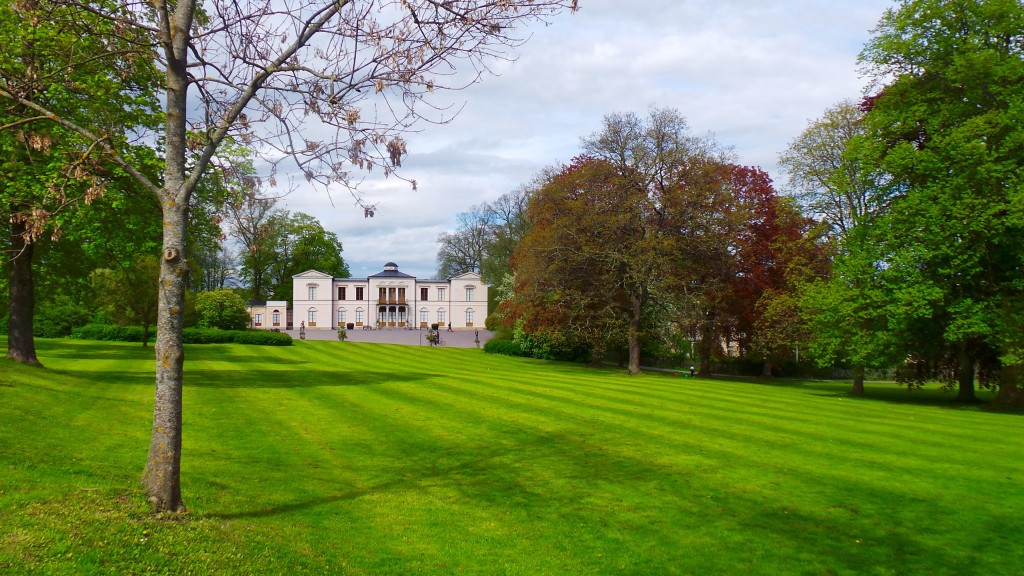 The gardens have special areas where one can picnic and as the day became sunnier it was so refreshing! 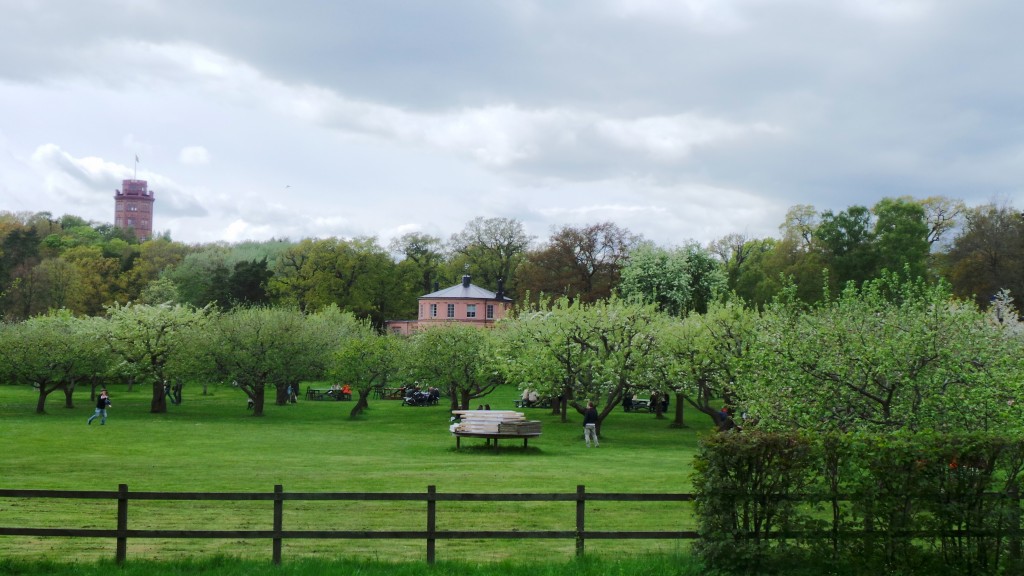 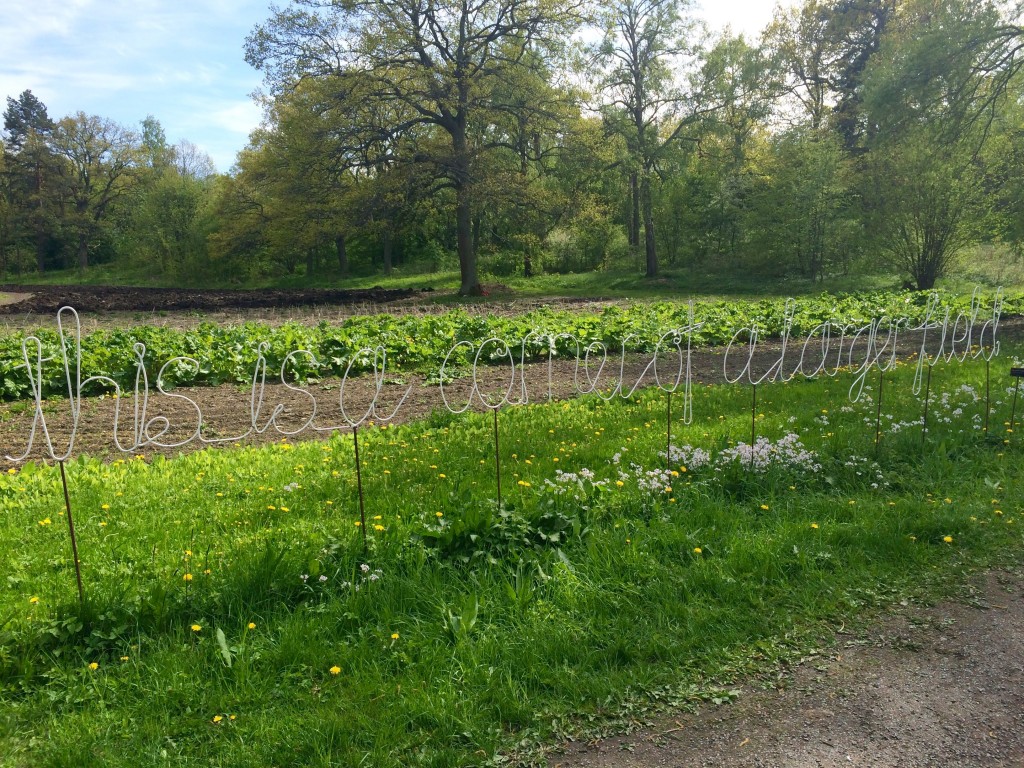 This is a corner of a larger field

This is one of the most visited parks in Stockholm as it is located in a very nice area in the city with many outdoor cafés! Unfortunately, I just missed the blooming of the cherry blossoms so if you go try to make it earlier in May as I’ve heard, it’s really worth it! If you go in the winter season there is an ice-skating rink!

There are several landmarks surrounding the area, one of which is the Palace, but more information on that later. 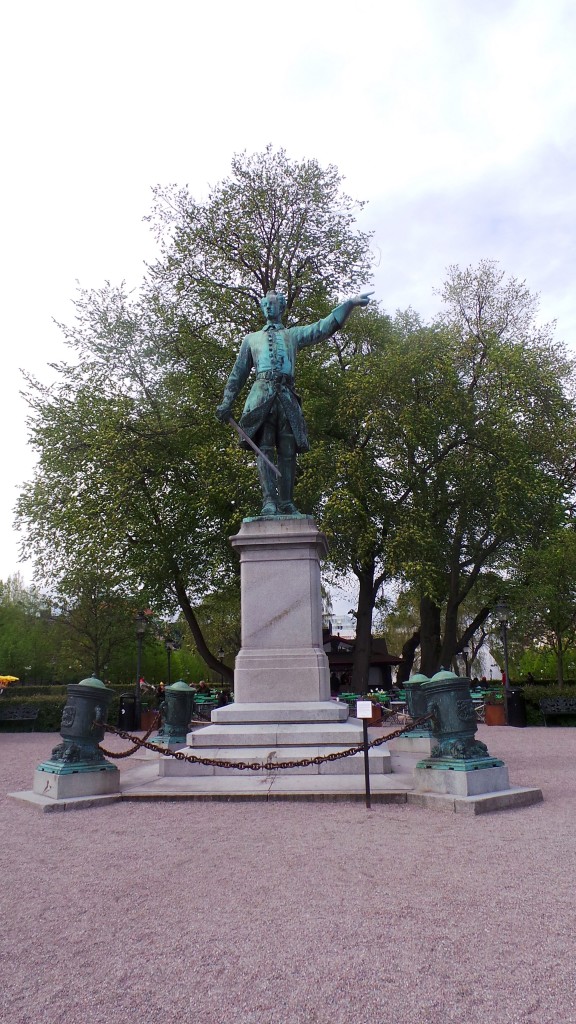 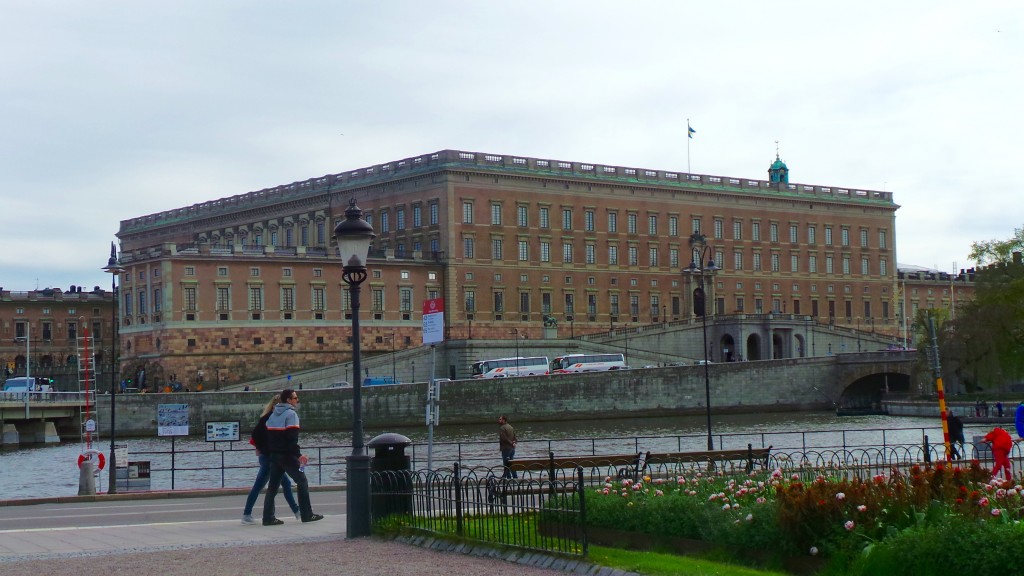 The Champagne Bar by Richard Juhlin

So after a lot of luck with the weather on Saturday, Sunday was cold, windy and it rained all day! This was definitely not going to prevent us from having a good day so we decided to start with a Fika. Fika is what the Swedish call a coffee break and as one of their most popular pastries is cinnamon rolls, that is exactly what I went for. 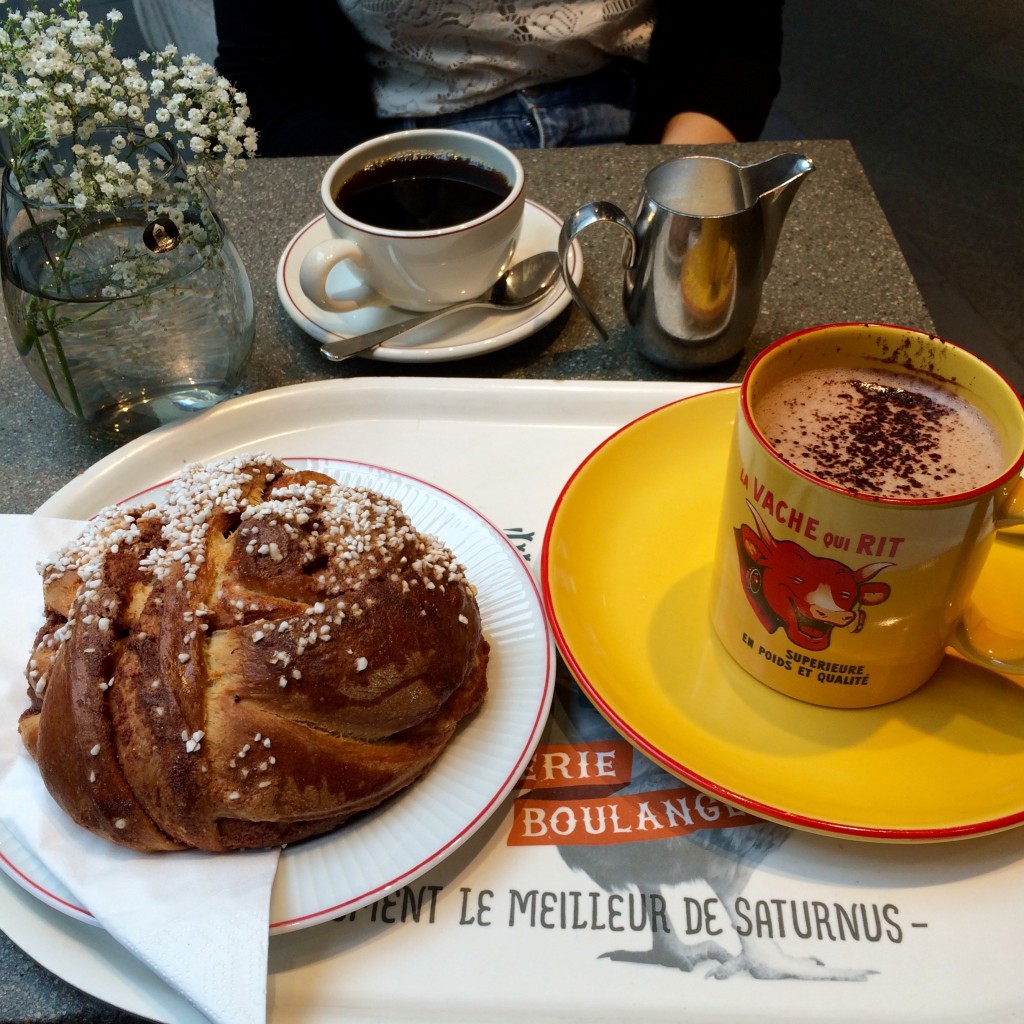 It was the best (and biggest) cinnamon roll I have ever tasted so I recommend the Champagne bar that is located in the more select MOOD shopping mall. It is a really quite place with many different stores, restaurants but not too many shoppers, which is perfect!

With some bravery, after the delicious Fika we went into the rain and to the famous Gamla Stan or Old town. After walking around the vintage buildings we arrived at the famous Stortorget square. 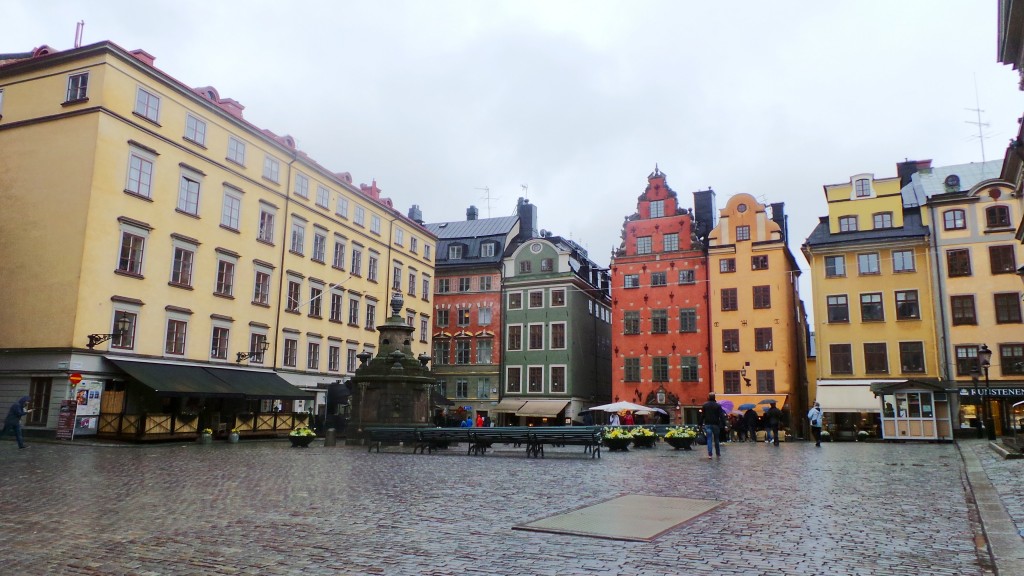 There are many different shops along the old town and it is the perfect place to walk around and absorb the surroundings. 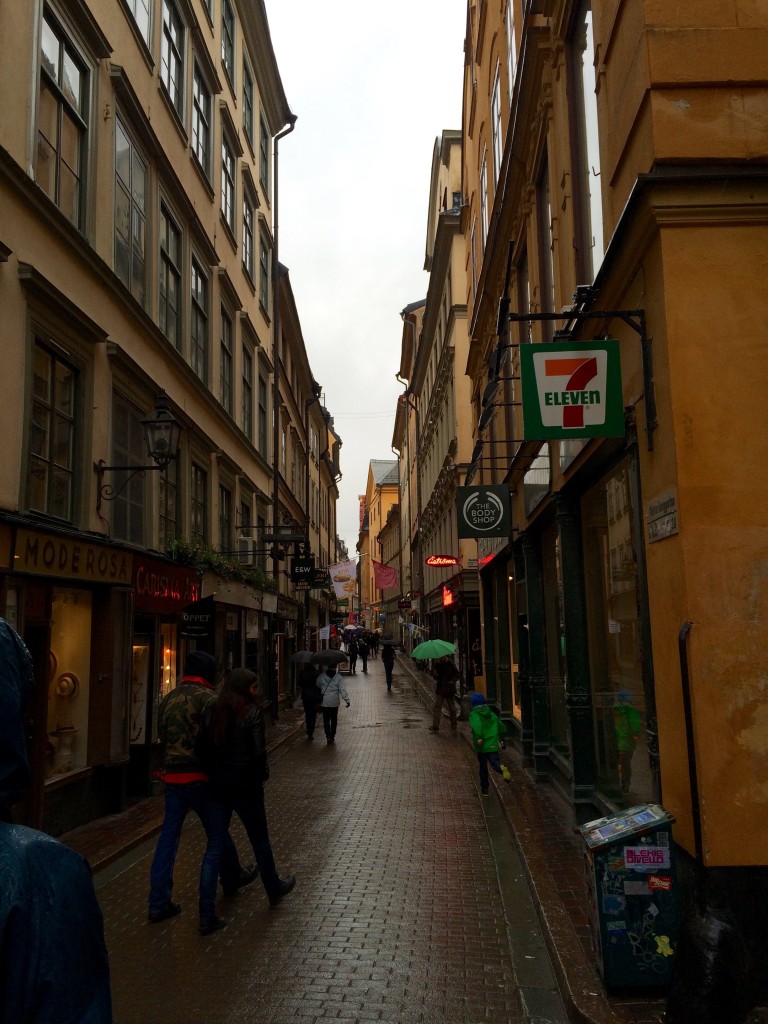 One of the main streets at Gamla Stan 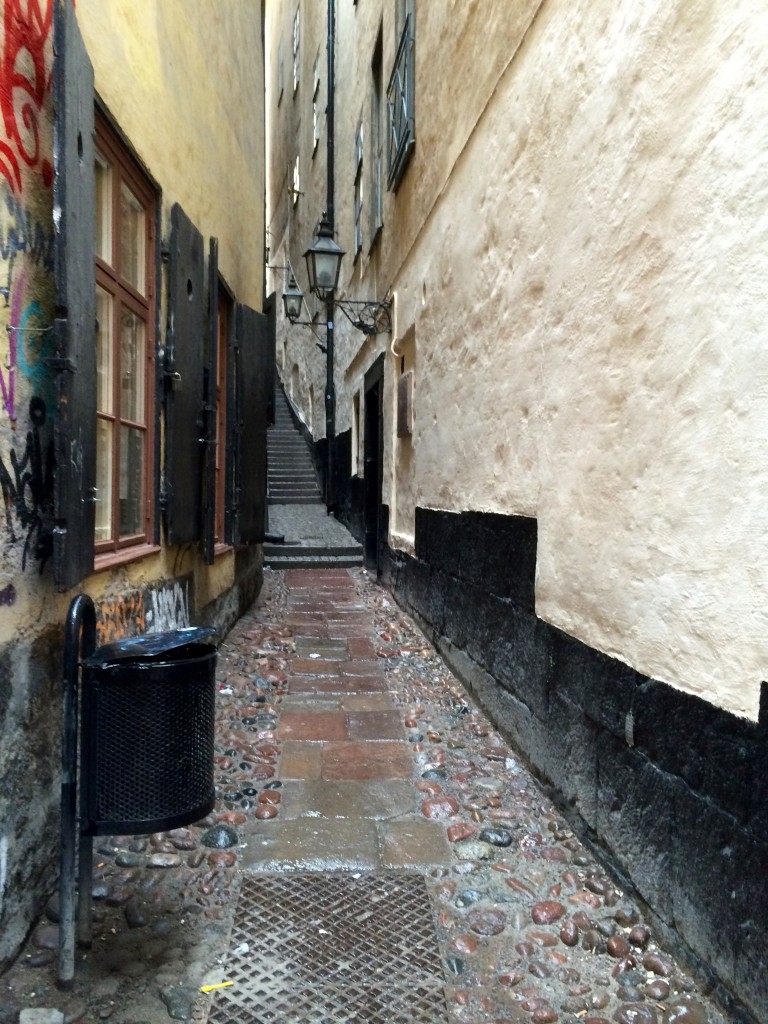 The narrowest alley in the city

Close to the Gamla Stan you find the Royal Palace; home to the offices of the Swedish Royal family and the Royal Court of Sweden. The royal family’s actual residency is at Drottningholm Palace, which can be found outside the city centre.

We arrived at the moment when the guard was changed and where able to go into the Palace to have a look. 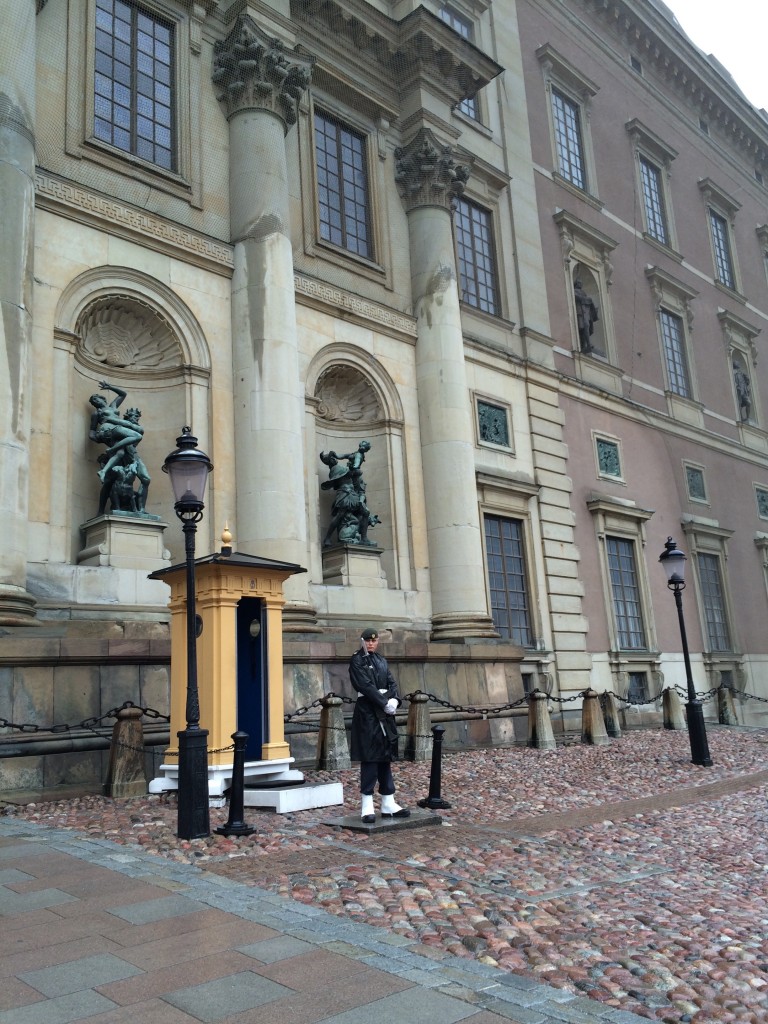 The Guard at the Royal Palace

First we went into the Royal Chapel, which was built in the 18th century and acts as a Parish for its members. It is also the location of ceremonies for the royal family. The decoration was inspiring with a visually breathtaking ceiling. 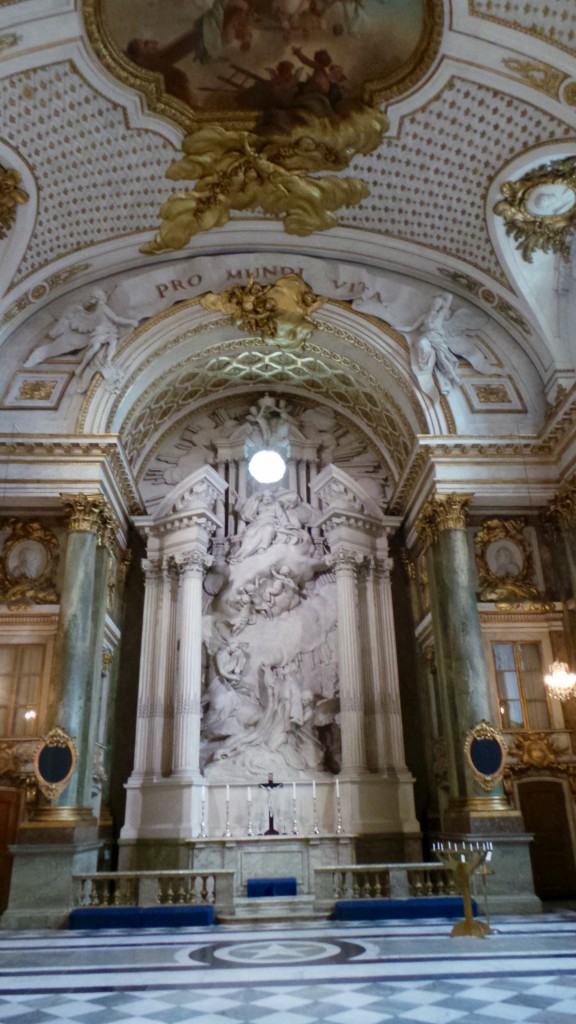 The Royal Chapel at the Royal Palace 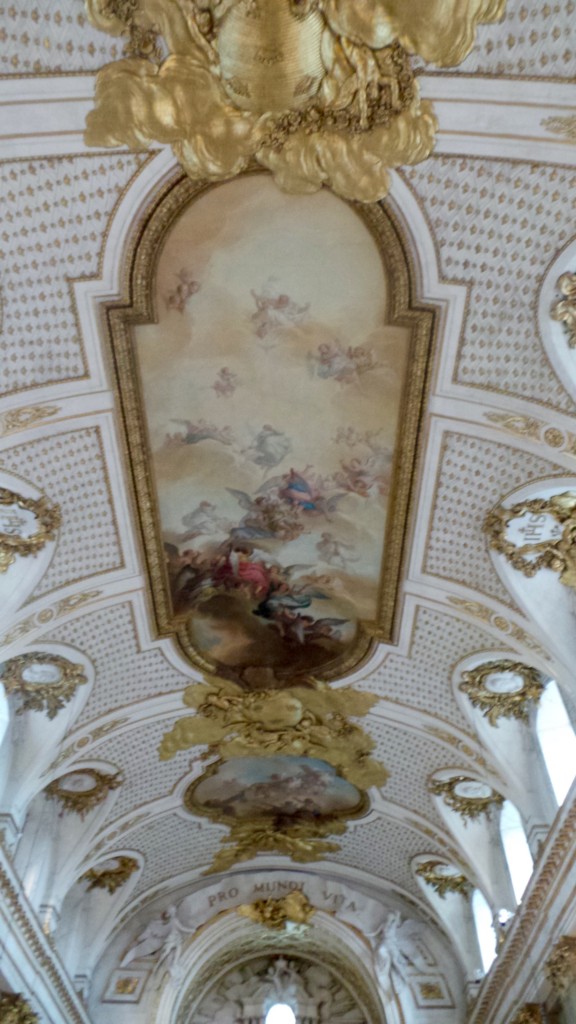 The ceiling of the Royal Chapel 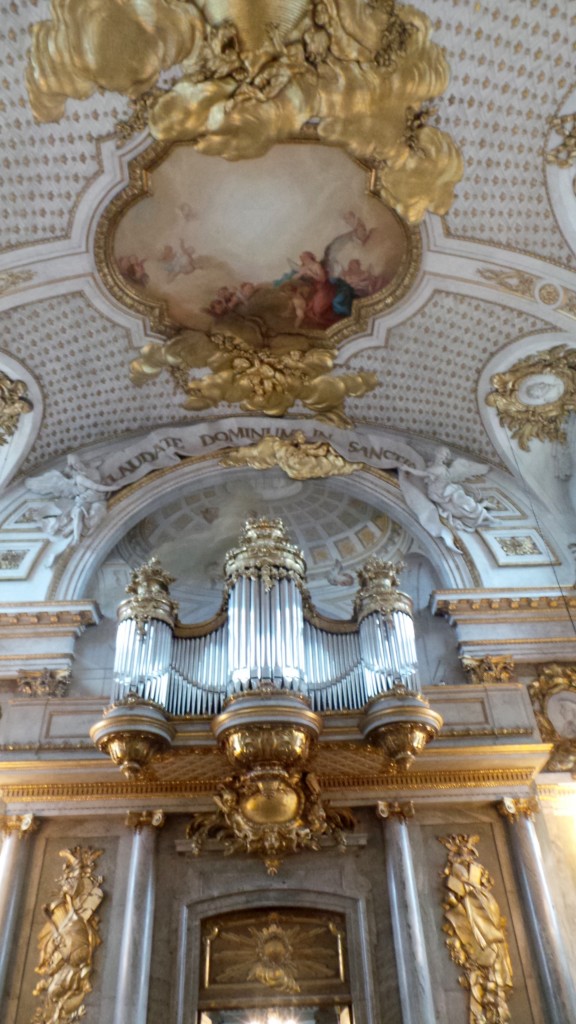 Then we went into The Hall of State which is a bit more reserved and holds the Silver Throne used at coronations.

The Parliament house is located between the Gamla Stan and another island, Helgeandsholmen. The building was completed in 1905 and has been expanded since.

The Parliament House from the side 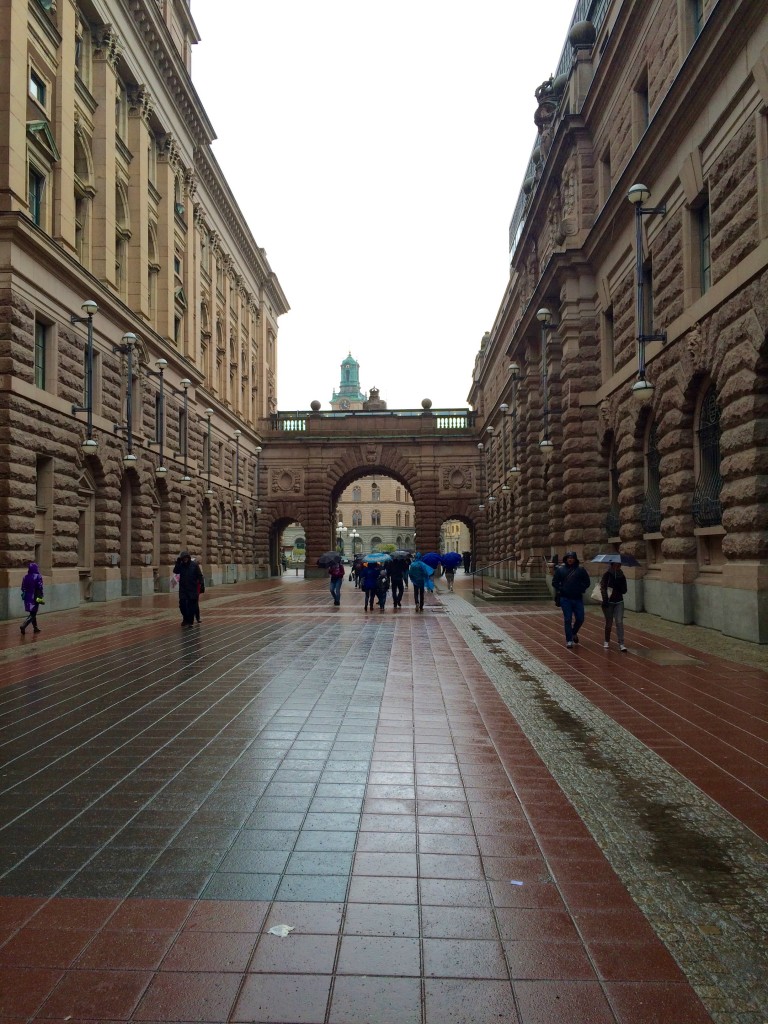 Passageway through the Parliament House

Söder (as the locals would call it) is an Island with a very trendy neighborhood in Stockholm. There is a large diversity in cafés, bars, clubs and unique boutiques! This is where I spent my Saturday night and it was a lot of fun.

After a long day of walking in the rain, Sara and I went to dinner at an Italian restaurant called Primo and it was delicious. If you like Italian you should go!

SergelsTorg is a square found in the centre of Stockholm with a sunken plaza and a distinguishable floor of black and white triangles. 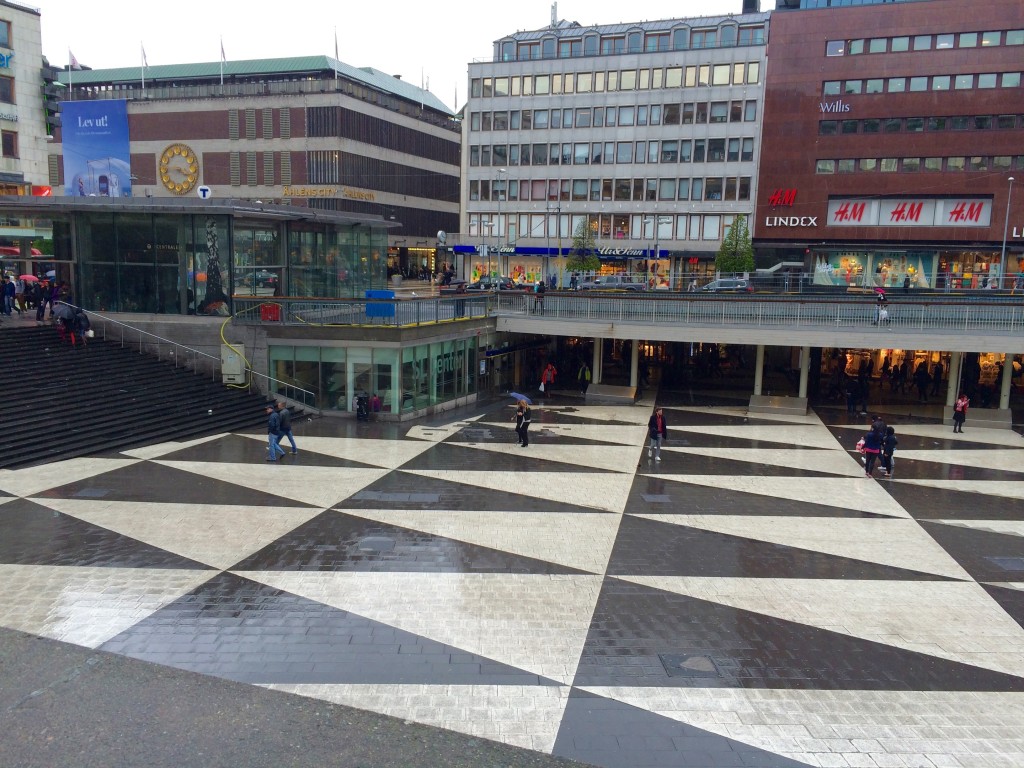 The square was created when the city was reconstructed to facilitate growing numbers and is now the absolute centre. It is not a scenic or beautiful site, however, its history is interesting as well as the fact that there always seem to be demonstrations occurring in the square. Only a few minutes’ walk from the square you reach Drottninggatan or Queens Street, which is the main shopping street in Stockholm.

With one day left (Monday) in Sweden we went to the fourth largest city in Sweden, Uppsala – but for that you must wait for the next post!