This new approach to art and design is something that is often found in London and takes the traditional, gives it a new contemporary design and produces something entirely new. This is certainly the case when I recently visited the Royal Albert Hall to see an exclusive performance of the English National Ballet’s Romeo and Juliette.

The showcasing was leading by Carlos Acosta and Tamara Rojo dancers. It was a wonderful experience; a splendid production in an astonishing venue. The show had over 120 professional ballerinas and the choreography was created by Derek Deane. I would describe the performance with one word: “shocking” – where passion and tragedy went hand in hand.

The Orchestra of the English National Ballet under the experienced direction of Gavin Sutherland delivered the best narrative ballet score of the twentieth century with considerable aplomb, wringing out every scintilla of the extreme richness of emotion to heighten the drama throughout this outstanding performance, which looks to be a scintillating highlight of London’s summer season.

Similarly Mozart’s comic masterpiece was reworked by the English National Opera – Cosi fan Tutte – where I had one of the most enjoyable evenings. Cosi fan Tutte has a total of two acts – with libretto by Lorenzo da Ponte and music of Wolfgang Amadeus Mozart – where Fiordiligi and Dorabella with their fiancés, Ferrando and Guglielmo, and the glorious sideshow performers at Coney Island made me laugh out loud. The fairground is a place where anything can happen – bearded lady, sword swallower and strong man are some of the characters that appeared during the spectacle. Love, desire and battle of the sexes, utterly brilliant! 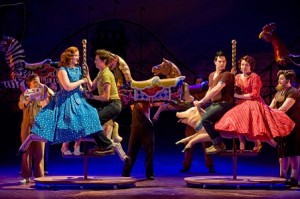 Evita, the applauded production of de Andrew Lloyd Webber and Tim Rice, starring Marti Pellow playing Che and Madalena Alberto in the title role, will return to London at the remodelled Dominion in mid-September for seven weeks and 55 exceptional performances. Evita has won many awards, becoming the first British musical to win the Tony Award for best musical and it has a beautiful soundtrack, including many memorable songs such “Don’t Cry for Me Argentina” or “On This Night of a Thousand Stars”.

There’s no information yet on who will front the musical… but next December, it is going to come back to the West End of London one of the most watched shows during 80s & 90s: Andrew Lloyd Webber’s musical, Cats. This is based on the book by T. S. Elliot, Old Possum’s Book of Practical Cats. The known musical composed by Andrew Lloyd Webber will be playing during 12 weeks at the London Palladium – it will be a version of the production currently touring in the UK. Cats has appeared in more than 26 countries, has been translated into 10 languages, viewed by over 50 million people worldwide and has become a multiple award-winner – at awards such as Olivier, Tonys and Grammys. Let’s see how this show improves!